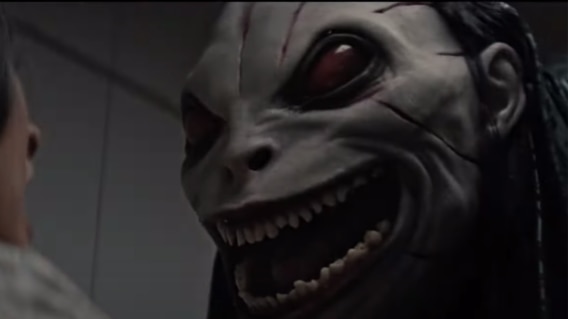 It’s spooky season, babes, and that means all the best streaming services are going to line up to flood your schedule with their Halloween calendars. While we love the big theatrical terror or the communal at-home experiences, there’s also always some love for the simple streaming darling. But Grimcutty isn’t it.

Asha (Sara Wolfkind) is a modern teen, or at least what an adult thinks a modern teen is. She loves her devices and is working hard to build a following on her ASMR videos. Her parents, however, are less enthused about her devices. Not just afraid of how they affect their kids’ social skills, Asha’s parents (Shannyn Sossamon and Usman Ally) are worried about a violent meme called the Grimcutty. The Grimcutty is a mysterious and vicious meme that parents believe to be the cause of kids cutting themselves and attacking others. As Asha’s parents buy into the fear and start locking up her and her brother’s gear, Asha struggles to solve the mystery of the Grimcutty, finding herself slowly being haunted by it. Soon, she discovers that the meme-based monster might be fed by the actions of worried parents and not that of curious youth.

John Ross, who wrote and directed, is a veteran of horror shorts having worked on episodes of Don’t Watch This, 1 Minute Horror, and Bite Size Halloween. The horror short is present here; much of this feature feels like a stretched-out quick idea. The Grimcutty is a meme, the meme is fed by parental panic. It’s an interesting seed (perhaps based on the real meme/”viral hoax”, Momo) considering the misunderstandings and moral panic that surround our internet devices and how parents worry about what their kids are being exposed to. But Grimcutty doesn’t explore the idea enough to justify the feature-length, and instead pads it with one-off moments like frightened parents reacting to social media posts and the discovery of weird mommy blogs. It’s not impossible to make this work: these ideas have been explored before in films like Slender Man and have even been more effectively stretched like the creepy pastas in Channel Zero. Though doing a bit of a better job with the concept than Men, Women & Children, this story feels stunted by its premise, showing its monster cards way too early then leaning too hard on a predictable twist in the formula. There’s not much to it, which might have been okay in a well-made creature feature.
We haven’t had a ton of exceptional modern creature features, and the ones we’ve had have leaned on the ever-present theme of trauma. Things like The Babadook brought that version of the creature feature to the forefront and some of us have since clamored for the next great monster story outside of kaiju tales. Grimcutty at least spared us the monster being a grief manifestation, but it still leaned on some clichés and wasn’t exceptional enough to work. The monster shows up pretty quickly and is too reminiscent of those jump scare gags popular in the times of eBaum’s World. The acting feels wooden and the direction and/or editing makes it all feel slow in a way unable to garner even simple jump scares (in a tale reminiscent of popular jump scares, no less).

John Ross’s take on the creature feature and clashing generations doesn’t speak well to either Gen X or Zoomers. The parents feel like phony one-dimensional stereotypes when you wish they felt like characters from an episode of The Twilight Zone or even The ‘Burbs. The kids feel like kids written by adults, their entire motivations being “getting online,” and deciphering the meanings behind comments and likes. Grimcutty is born of an interesting idea about how parents just don’t understand, but its execution is an unfortunately boring and sluggish story that might have been saved by a really dope-looking monster.


← AMC's 'Kevin Can F*** Himself' Never Got the Recognition It Deserved | In a Shocking Move, 'The Walking Dead' Goes Off Book →