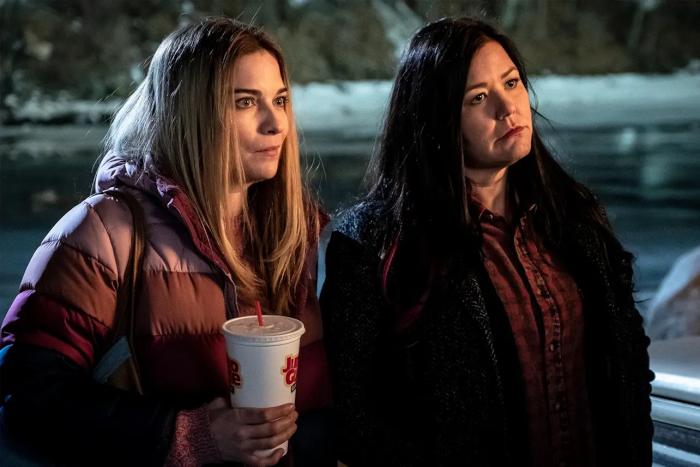 AMC's 'Kevin Can F*** Himself' Never Got the Recognition It Deserved

Spoilers for the finale of Kevin Can F*** Himself below.

The AMC series Kevin Can F*** Himself never got the recognition it deserved, from the network to viewers alike, and perhaps that can largely be attributed to the odd structure of the story. An unsatisfied wife, Allison (Annie Murphy), has a dullard for a husband (Eric Peterson) whose ability for performative and real buffoonery has managed to cut Allison off from any family, friends, or opportunities that may have opened up her claustrophobic world, while also keeping appearances of the fun-loving guy who isn’t always bright but is a “man of the people” sort, a perfect fixture for the type of Worcester, MA style of toxic masculinity being skewered. His insidiousness isn’t that he’s openly abusive, or even that he met Allison while she was drunk and grieving the loss of her father. As she said, he made her laugh, and at that point in her life, it was a salve to the walls caving in around her.

The root of his general unpleasantness is in how he gaslights the people around him by making them all succumb to his level so that they’re already at a low point so his jabs and strong-armed requests are passively dealt with because it’s easier than picking them apart and reflecting on as the under-the-radar microaggressions and casual abuse that they are.

Kevin is a bad guy, Allison wants out and is willing to go to drastic measures, and a mess happens in between. It doesn’t sound too far-fetched as a premise on paper and is close to an inverse of the male antihero that so often decorates the main lineup for the network. The catch, here, is that the show plays with tone and format as a means to further lambast sitcoms whose male characters have considerably hotter wives than themselves, who are doting and docile and may argue but are always depicted as the buzzkills for harshing the fun guy’s vibes. Women are nags, so the story goes.

Showrunner Valerie Armstrong recognized the incredulity of this, especially in light of the series Kevin Can Wait, starring Kevin James, which wrote his character’s wife, played by Erinn Hayes, out of the show with little regard. It was as big and bright a sign that female characters in certain shows aren’t written to have agency, bodily autonomy, or any level of development that goes beyond “the wife” as anything we might see hung in neon lights.

Armstrong flipped the angle of the story. Part of the show would be lit and scripted like a standard, multi-camera sitcom with canned laughter and then the lighting would change and the show would switch into the single-camera format and we’d see the real fury that lay within Allison. The second season allowed more characters into the real-life fold, most notably Neil, played by Alex Bonifer, who too begins to see the negative impact being Kevin’s hype-man has made on his life.

Returning stronger than its debut, it makes the sting of the show’s end all the more sour. The first half takes its time as Allison tries to find a way to fake her death after the attempt on Kevin’s life blows up in her face as he becomes a local hero for putting his would-be assailant in a coma. While we’re always invested in Allison achieving her happiness, even if she can’t verbalize what exactly that is, the best moments of growth are due to her evolving friendship with neighbor Patty (Mary Hollis Inboden), a relationship that, in many moments, flirts with the idea of something more.

It’s that more, or the possibility of it, that forms both the heart of the series as well as its mission statement. Both women have struggled to find validation for their inner lives, the ones their husband or brother refuses to see, and both had learned to regard one another with little more than contempt — until the first time they shared a cigarette and saw one another in a new light. In its second and final season, they’re continuing to struggle with what it is they want, how they go about achieving it, and if they’re even allowed to want something to begin with. Allison has an exit plan, Patty has her girlfriend Tammy (Candice Coke), a detective who doesn’t trust Allison or her relationship with Patty. They’ve moved from enduring what life threw at them to settling for a little more than that without fully envisioning a world where they might ask for more than the bare minimum.

Murphy and Inboden are extraordinary together and Inboden, in particular, emulates a very specific type of New Englander that many of us know ourselves. Between the two there’s always a sense of laughter even in dire circumstances, and real pathos when the moment calls for it. Along with creator Armstrong, there’s a promising line of extraordinary talent that deserves to be further explored and while I’m sad that it ended so soon, I’m endlessly curious and excited about what they’ll all bring to the screen next.

Kevin Can F*** Himself finds its best moments in the shared warmth, camaraderie, and even love that Allison and Patty share. Each woman is going through individual hardships and both are always, consistently, there to support each other, even if it comes with complaints. The series isn’t a rough roadmap of point A to point B, from Allison’s enlightenment to Kevin’s death. Instead, it’s a sometimes messy meditation on the will of these two characters and the ability to find happiness in a home tarnished by ugliness. It goes even further and asks why they can’t both find that peace while simultaneously seeking the comforts of potential — potential new love, potential new career, potential new purpose. The series, for its brief lifespan, doesn’t lean too heavily on its DNA; instead, like its main characters,it dares to mold the storytelling format into something it wants to see.

Not for nothing, but Kevin does die, though not by Allison’s hand. It’s his own drunken idiocy that engulfs his house while simultaneously snuffing out his light. While Allison’s rendezvous to another state after faking her own death to save Patty isn’t given the narrative justice it deserves (another example of something needing more time) her return is ripe with tension. Kevin has moved on, dating a woman named Molly (hilariously and pointedly played by Kevin Can Wait’s ex-star Erinn Hayes), and then Allison reveals the truth to Molly. Molly leaves him, Neil isn’t responding to his calls, and even his dad moves away from him. He has no one so when Allison appears again to tell him she’s divorcing him, the artifice slips. We transition once last time from sitcom lighting to drama, and Peterson does his best work here as the real Kevin emerges. He doesn’t grow in size or become more physically domineering, but his desperation for control is palpable and striking, as he tries once more to get under Allison’s skin. She refuses to let it get to her and leaves him for good.

His death amounts to little more than destructive pettiness; He starts to burn Allison’s things before falling into a drunken sleep.

It’s Patty and Allison’s meeting on the burned front steps that matter most. Reunited, they promise to “die alone together.” They don’t kiss (they should have!) but it’s a declaration worth celebrating as these two women have finally been untethered from those in their lives desperate to confine them.


← 'What's the Spookiest Or Most Inexplicable Event That Has Happened To You?' | Review: Hulu's Momo-Inspired 'Grimcutty' Is a Failure →