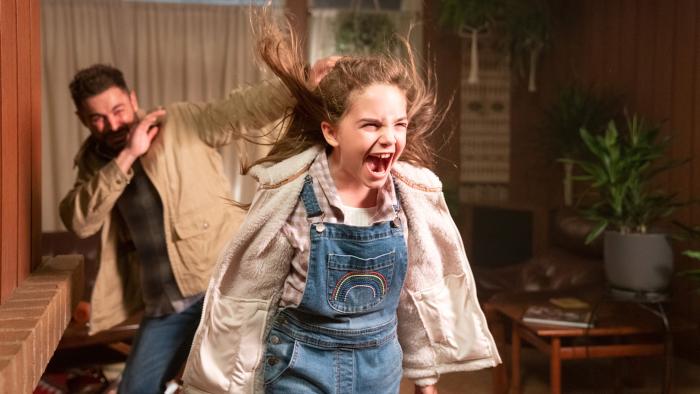 I won’t be the first to line up with “fire” heavy wordplay to describe this film. Lukewarm, tepid, flames out, fizzles, what have you. There’s oft a distinct satisfaction in conjuring up the most eloquently phrased roasting (another one) for a less-than-successful feature film, but that’s really not how I want to approach this one. Firestarter is mostly a bummer since it feels like the promise of what might have been. Immense talent and iconic source material should have made for a couch-and-popcorn fright, but this newest feature couldn’t … heat up enough to get the kernels to pop? Is that anything?

In one of the larger changes from the 1980 Stephen King novel (and also the 1984 film adaptation), this movie starts at the top instead of in media res. The Previous versions started their stories in the middle, Andy and Charlie McGee already on the run, thus maintaining a hurried pace most of the way through. This 2022 adaptation introduces us to Charlie (Ryan Kiera Armstrong) as the confused young student living with her loving but paranoid parents, Andry (Zac Efron) and Vicky (Sydney Lemmon). Charlie has the power to create fire with her mind, something her powered parents disagree on how to manage. Lest they expose themselves and catch the attention of The Shop, the McGee family works to jam their powers into themselves. But young Charlie lacks the maturity, or maybe the will, to manage her emotions in the face of the bullies at school, and soon she creates a visible fireball, setting her and her parents on the run. With her mother critically injured by one of their hunters, Andy and Charlie hit the road and avoid capture and study for as long as they possibly can, using their powers only when necessary in order to protect themselves from exposure and the physical toll of using them.

It’s hard to fault this second kick at the can for changing up the story, but by doing so, it killed any momentum. There’s almost no sense of urgency at all, and paired with the editing and wooden line delivery, there’s no sense of tension or haste. While Firestarter is a story about a father and daughter being othered and thus at risk of government study, it’s mostly a story of a pair on the run. But by virtue of how this film adaptation is put together, it never feels like anyone lifts two feet off the ground. Efron might have successful comedic chops which work well in contrast with his Ken doll appearance, but his puppy-dog stare brings nothing to this character. He looks like a bored walking haircut, almost deadpanning his dialogue at a time where he’s meant to be teaching his superpowered daughter how to mercifully murder cats with her mind while on the run from a bounty hunter. Armstrong does alright and is at her best in the moments when Charlie gets to hulk out.

This version is directed by Keith Thomas who blew everyone away with his first feature, The Vigil, which he both wrote and directed. Only directing this time (the script penned by Scott Teems), parts of the Thomas DNA are visible. Thomas is forging a signature style, using angled hallway pans and peppered warm lighting to play with characters’ faces. Part of that “bummer,” is knowing the type of intense and gorgeous horror that Thomas is capable of creating but feeling most none of it here. The best horror moment takes place in a car and is set up early in the film when Charlie learns about mercy killing, and it lets Charlie shine as a complicated anti-villain with a twisted takeaway from a life lesson. Also, it looks enormously scary.

There’s horror greatness in this film’s blood, not just from Thomas and King, but also in the score by John Carpenter, Cody Carpenter, and Daniel Davies (who also worked on the score for the 2018 Halloween movies). Then there’s also the powerful work of Michael Greyeyes as Rainbird (who was stellar in Blood Quantum) who does great work with this new take on the original character that adds a layer of complexity to an otherwise familiar villain.

Though this is the second official adaptation of King’s novel, the story of the “real superhero” being othered and on the run has been taken on a few times. Gorgeous films like Freaks, The Innocents,and even Brightburn have created takes on the story of spooky kids with miraculous abilities. Though Firestarter didn’t come out as the definitive take on this story, it can secure itself as a middle-of-the-pack adaptation if someone ever wanted to create a niche marathon or pitch an Avengers style team-up feature.