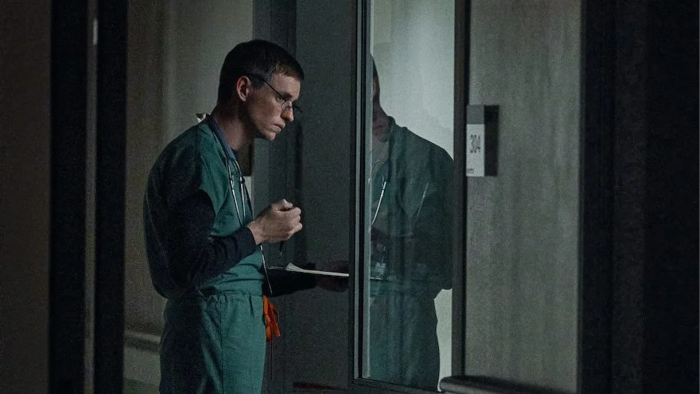 Now on Netflix: Eddie Redmayne Kills in 'The Good Nurse'

It is believed that Charles Cullen, a former nurse arrested in 2003 for murdering his patients, is the most prolific serial killer in recorded history. While he has 29 confirmed victims, all of whom died when he injected drugs into saline bags, it is thought that he is responsible for over 400 deaths. While many in the healthcare field were aware of the shadow of suspicion that followed him from hospital to hospital, Cullen was able to kill with impunity. Things didn’t change until his colleague and friend, Amy Loughren, became involved with the investigation.

Directed by Tobias Lindholm and based on the book by Charles Graeber, The Good Nurse arrives at TIFF for its world premiere with solid fanfare. It’s another Netflix exclusive at the festival, with the streaming service eager to show their muscle in Oscars season after being beaten to the Best Picture punch by Apple. For the platform that’s become the go-to home for true crime, this is a fitting film and it seems primed to play well with those murder-hungry audiences. The most interesting aspects of this true-life tale, however, are focused less on the grisly deaths and more on the broken system that enabled such a figure.

With a restrained eye and glacial pace, Lindholm offers a grim but refreshingly unflashy portrait of an industry hanging on for dear life. It’s the early 2000s and Cullen (played by Eddie Redmayne) is nearing the tail-end of his killing spree as he becomes the latest hire at a cash-strapped New Jersey hospital. He is paired up with Amy (Jessica Chastain), a weary single mother doing night shifts. She’s barely keeping her head above water and is clinging to her job for the upcoming health insurance, which will help her fix her heart problems. Together, the nurses go through the exhausting grind of dark nights in the intensive care unit. A friendship blossoms with Charlie eager to please Amy, a woman in desperate need of a life raft. She often seems to be the only person in the ward who treats her patients as people.

The savviest move screenwriter Krysty Wilson-Cairns, Oscar-nominated for 1917 and rebounding after the mess of Last Night in Soho, makes is in allowing the focus to move away from the big stars and towards the corruption keeping Cullen’s crimes out of sight. Nnamdi Asomugha and Noah Emmerich play a pair of detectives who are called in to investigate one of the suspicious deaths, seven weeks after it happened. They’re hindered at every turn as they look for slivers of evidence. Kim Dickens, in a standout supporting role, plays the hospital’s risk manager, a corporate clone who speaks of patients in terms that reduce them to worrisome statistics. She can barely hide how sleazy what she’s doing is. For-profit healthcare cannot truly embody the altruistic intentions of the Hippocratic Oath when money is the ultimate goal. In one scene, a patient killed by Cullen (who is described as having ‘expired’) is left in her room undressed and half-naked, and the nurses prepare her methodically while a static shot captures this moment of brief humanity.

These sections are easily the sharpest parts of the film, to the point where you wonder if The Good Nurse would be a more satisfying and appropriate narrative if it didn’t spend so much time with Cullen and Loughrey. The decision to not delve deeper into Cullen’s past for easy psychological answers is an admirable one although that means that he feels thinly drawn for much of the film. Loughrey gets more space, with Chastain bringing quiet steeliness to a woman whose stubbornness keeps her going even as her heart remains on the brink of stopping. Chastain balances her integrity with her terror as Amy agrees to turn against her friend, more aware than ever that she and her children could be at risk thanks to the man they welcomed so warmly into their home. She copes better with the sketchy writing of this character than her main co-star does.

We at Pajiba.com have made no secret of our distrust of one Eddie Redmayne, an actor of such distracting tics and mannered whimpering that I continue to be amazed that he’s considered in any way a good actor. He’s not capable of lived-in naturalism and is too reliant on grandstanding displays of Calculon-esque showboating that even Rami Malek can breathe a sigh of relief. These qualities, for lack of a better word, should make him ideal for the role of an awkward nurse who is also a seemingly motive-free serial killer. And it does, at least for some moments. He’s believably “off” in the beginning, glacial behind the eyes but not so distractingly evil that anyone else would immediately notice. You get why someone would want to be his friend. But then Redmayne can’t help himself and by the time we get to a climax, he’s bellowing and stroking his face like a toddler. What should be a moment where the veil drops on a dangerous man feels like a deleted scene from Jupiter Ascending without the knowing camp. Expect it to be memed to the gods.

Ultimately, The Good Nurse feels too restrained for its own good by the time things wrap up, even with Redmayne giving his spontaneous audition for pantomime season. There’s not enough to make us feel as though Loughrey and Cullen are much more than good nurses vs. bad nurses. A forensic insight into Cullen’s crimes was possible, and while the filmmakers’ decision to avoid the kind of true-crime salaciousness that Netflix has reveled in for several years was the right one, The Good Nurse has little left on the table to sustain itself for two hours.

The Good Nurse had its world premiere at the Toronto International Film Festival. It premieres on Netflix on October 26.


← 'The Goldbergs' Continue to Give the Shaft to the Jenkintown Posse (JTP) | Martin McDonagh's Bleak Comedy 'The Banshees of Inisherin,' Starring Colin Farrell and Brendan Gleeson →