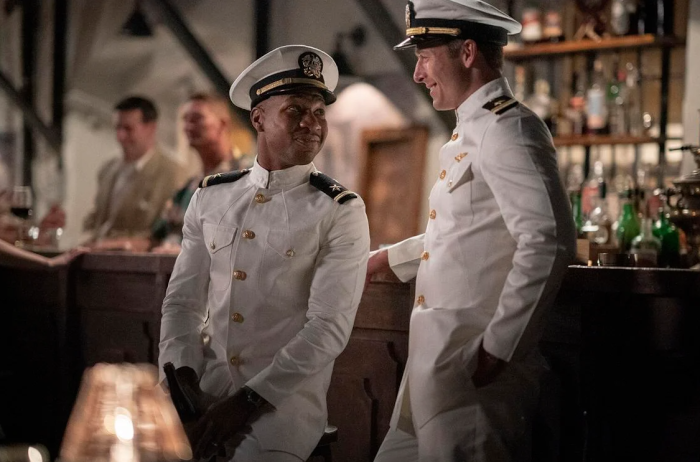 Review: 'Devotion' One, 'Top Gun' Nothing

Nobody ever explicitly said that there could only be one movie about Navy pilots that co-stars Glen Powell playing a smirking maverick in a jumpsuit and bomber jacket who heads into treacherous enemy territory on an impossible mission released into movie theaters within one calendar year. But maybe that’s because nobody realized they had to be that specific? While it’s not exactly an Armageddon versus Deep Impact scenario, Devotion, Sleight and Sweetheart director J.D. Dillard’s telling of a true-life tale from the Korean War based on the 2014 book by Adam Makos, does feel as if it will live and die in the shadow of this year’s immense blockbuster Top Gun Maverick, for sure.

This is really too bad as I vastly prefer Devotion, an imperfect but heartfelt and beautifully acted old-fashioned yarn about brothers-at-arms. And yes I’m profoundly aware that this will be a minority opinion—I was profoundly aware that my negative opinion of the flaccid Top Gun Maverick was a minority one when that film came out and everyone’s eyes glazed over when I said as much, as if they’d all gone into a trance where negative words about the movie slid right off without recognition. I didn’t get quite to the point where I felt like Kevin McCarthy at the end of Invasion of the Body Snatchers where I was running up and down the streets screaming that “You’re next!” But the year’s still not over and the Oscar nominations haven’t been announced yet, so we’ll see about that.

Devotion tells the story of Tom Hudner (Powell), the new pilot in town, and his slowly burgeoning friendship with Jesse Brown (Jonathan Majors, of The Last Black Man in San Francisco and Lovecraft Country and MCU superstar-to-be in the making),—Brown is the only black fighter pilot in the entire United States Navy as it stands in the year 1950 here on the eve of the “Forgotten War,” as the Korean War has now come to be remembered. There are other guys in their squadron, a wall of similar white faces played by a charcuterie board of familiar-ish fellows like Daren Kagasoff (The Secret Life of the American Teenager), Spencer Neville (Ozark), Nick Hargrove (Charmed), and that middle Jonas brother that’s married to Sophie Turner.

Given more fleshing out there’s Thomas Sadoski (The Newsroom, not to mention being Mr. Amanda Seyfried) as the fellas’ poetically-inclined Lieutenant—he gets to give a couple of choice speeches about the Nature Of War and Man and uhh you know Devotion and the like. We have most definitely heard speeches like this in movies before, but Sadoski’s performance kept surprising me—he dials it all down with a sweetness and an affection that keeps the film, along with the work by its two leads, from strutting masculine bonafides too hard. This movie recalls scenes like the touchy-feely friendship at the heart of the 1927 Best Picture winner Wings more than it really does rah-rah modern takes on warmongering; it’s surprisingly thoughtful, tuned into the emotional lives of the young men, these boys really, more than it is much in the way of macho posturing.

This brings me to the heart and the soul of the film, which is Jonathan Majors as Jesse and actress Christina Jackson (Boardwalk Empire and The Good Fight) playing his wife Daisy. Jackson doesn’t get enough screen-time—this is after all a movie about the boys—but Dillard makes her presence ache across the film; we always feel her absence even when the soldiers are romping on leave in Cannes with Liz Taylor. Here’s to hoping Jackson gets bigger, choicer roles off of this though, because she and Majors create a lovely space together on-screen in only a few minutes of screen-time.

And Majors, well, with him I’ve made my feelings known previously, saying in this 2020 piece here on Pajiba that, “I don’t believe in god or religion but I believe in actors, in the alchemy of good acting,” and Majors turned me into a true believer more than most. It’s a little early to wager but he really might turn out to be one of the greats of his generation. His work in Devotion, tender and smart and deeply complicated every second he’s onscreen, is further fuel for that fire. Jesse’s nobody’s saint or hero, and he’s not looking for those things in anybody else either. And Majors winds a surprising path towards enlightening this man and what must have been his daily struggle, choosing to snarl and obscure just a little more than a lesser actor, a lesser film, would feel necessary. This real life man couldn’t have asked for a better avatar anyway, and I’d take one of this performance over a dozen Top Guns.


Image sources (in order of posting): Sony,
Most Viewed