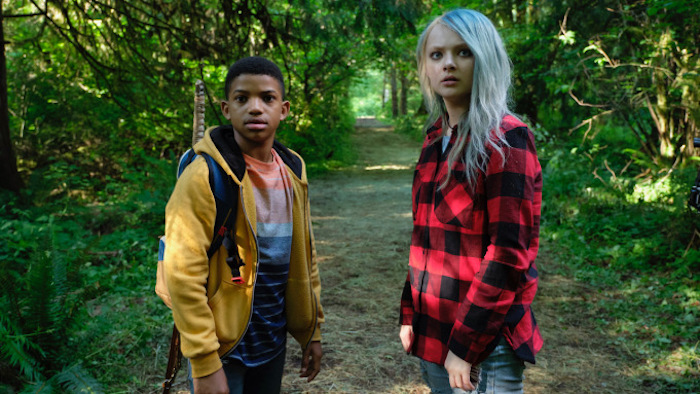 Stop me if you’ve seen this one before: there’s this creative kid—definitely a bit of a loner—who seeks refuge in a fantasy in the face of a traumatic situation, only for their commitment to their fantasy to lead them into real danger. Pan’s Labyrinth? You might be guessing. The Spirit of the Beehive? A Monster Calls? Yes to all of the above, but also no, because while the shoe fits the story of the hour is actually The Water Man, the feature directorial debut of David Oyelowo. Penned by Emma Needell, it’s technically an original script in the sense it isn’t adapted from another specific property even though it ultimately plays like 90 straight minutes of déjà vu.

This time around, the artsy loner is Gunner Boone (Lonnie Chavis), an aspiring graphic novelist working on his most ambitious project to date—the story of a detective investigating his own murder (should someone break it to the kid that “Whodunnit to Me?” already has its own TV Tropes page?). School has just gotten out for summer break, so he’s free to fully dedicate his time to the story.

He’s the sort of kid who seems to enjoy the company of adults more than fellow children; if the fact that he doesn’t have any school friends knocking at his door wanting to hang out bothers him, we never see it. The closest thing he has to a friend at the start of the film is the proprietor of a local bookstore, who lets him borrow books for his writing research and then return them, no purchase necessary. (Did it not occur to anyone to make this character a librarian? But I digress.)

Gunner is also trying to deal with the fact that his mother is battling leukemia—or, more accurately, doing everything he can to not deal with it, and act like things are okay. His mother, Mary (Rosario Dawson) aids him in this quest by doing everything she can to hide the severity of her illness. This poor woman sleeps with a goddamn wig on because Gunner freaks out at the sight of her bald head. Presumably, she is named Mary because much like the proverbial Mother M she is saintly in ways most of us mere mortals can only ever dream of being. The woman is struggling through chemo and still has the strength to be everyone else’s emotional support person.

In contrast to Saint Mary, there’s Gunner’s dad Amos (Oyelowo himself) who’s posited as a disconnected “bad” dad. From what we actually see of him in the film, though, it’s more like he’s just a well-intentioned fallible human. He doesn’t always say or do the exact right thing, but he’s always trying to connect with Gunner, even if he’s not having the greatest success rate. The arc is definitely supposed to be about Amos trying to get better about reaching out to Gunner, but from the time the film starts he’s already committed himself to trying, so there’s really no journey to speak of. It’s a “disconnected dad” arc you’ve definitely seen before elsewhere, but Amos is too soft from the beginning for it to be particularly effective.

Overall, every character here feels incredibly familiar, an overused archetype scribbled in shorthand. As Gunner struggles to grapple with his mother’s condition, and desperate to somehow take control of the situation, he becomes obsessed with a local legend known as the “Water Man,” once upon a time a miner Edward (Ted Rooney), who survived a flood that killed the rest of his town and is now reportedly immortal thanks to the magical powers of a strange glowing rock (infinity stone?) he found one day. Gunner latches on to the story, determined to locate the Water Man and his life-sustaining magic stone, which he imagines will surely cure his mom. He finds a partner in crime in Jo (Amiah Miller), a local tough girl with a rough home life—as evidenced by the fact she wears heavy eyeliner and flannel, which at some stage along the way has become the uniform for such things—and self-proclaimed Water Man expert. Of course, Gunner also doesn’t tell his parents about his plan to hunt down a bogeyman deep in the woods. Still, they are obviously deeply worried by their 11-year-old effectively running away from home, so a chase ensues.

Both young actors give commendable performances, even if their characters are stale. While the rest of the cast includes some definite talent, the adult roles are simply too flat and paper-thin for anyone to bring much to the table, regardless of talent.

Overall, The Water Man is an underwhelming, overly familiar film, but it’s on the whole okay-ish. It’s harmless and well-intentioned, even though it makes more than its fair share of rookie mistakes, like having the music do WAY TOO MUCH in a pivotal scene. (If the orchestration is the only thing adding tension to the moment, you’re not quite doing it right.) Regardless, if you need something new to watch with the kids, it’ll do. The Water Man is not the sort of film that will leave you resenting the person who asked you to watch it with them long afterward, because neither of you will remember having seen it in about a week’s time.

The Water Man is only in theaters.

← Don't Let the Feds Tell You How to Love Your Chicken | On This Week's 'Manifest,' Paige Jennings from 'The Americans' Loses It →