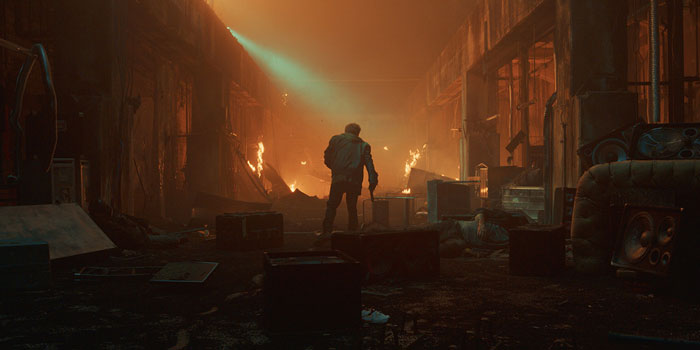 “Daniel Radcliffe with guns bolted to his hands.” This was how Guns Akimbo was introduced to the Fantastic Fest audience on opening night. While six theaters at the Alamo Drafthouse South Lamar were dedicated to the US Premiere of Jojo Rabbit, this one was packed with a crowd eager to see the latest from Deathgasm director Jason Lei Howden. As anticipated, there is plenty of gonzo violence in this high-concept action-comedy, plus a ghoulish turn by Ready Or Not’s Samara Weaving. And yet, I was left wanting something more.

Written and directed by Howden, Guns Akimbo stars Radcliffe as Miles, a self-proclaimed “code monkey” who designs cash-sucking video game apps by day and dedicates his nights to playing violent video games and riling trolls online. But he crosses a line when he outrages the admins of SKIZM, an underground fight club played across an urban landscape, where real players face life-and-death showdowns. As payback for his online comments, Miles’ door is busted down by a motley crew of baddies, bedecked in leather, tattoos, and smudged eyeliner. They knock him out, drag him off, and drop him back in his bed for a rude awakening. They have bolted guns to his hands. His fingers pinned to the handle, his trigger finger locked into position. They’ve pitted him against the game’s #1 player, Nix (Weaving), who has to her credit 47 kills and counting. He’s a noob. She’s a pro, and every shot he’ll fire will hurt like hell. Game on.

Howden brings his video-games-gone-too-real world to life with action sequences of rampaging violence, graphic elements (like bullet countdowns and VS banners), slo-mo close-ups of blood-splooshing headshots, and an achingly neon production design. It’s the kind of movie that would have blown the mind of 12-year-old me, but this premise of people forced into a deadly game is far from fresh. Weaving did this in Ready Or Not just last month, and Nerve offered a similar premise in 2016, and had the bonus of a charming rom-com in its mix. To be fair, Guns Akimbo has a romance thread too. Amid trying to survive this deadly game, Miles also tries to reconnect with his ex-girlfriend, who frustratingly feels far more like a fantasy of lonely gamer guys than a flesh-and-blood person.

Nova (Natasha Liu Bordizzo) is a gorgeous Asian-American girl, with long hair dyed Ramona Flowers vibrant. Miles waxes poetic that her pink hair is the color of a sunrise. She’s also a comic-book artist who sketches Miles, imagining him as hero. Then, she’s snatched by the SKIZM creeps to force Miles to play along, which gives him a chance to be a real-life hero and turns her into little more than a “princess in the castle” prop to be rescued.

Weaving offers another kind of gamer fantasy: the badass bitch who goes berserk. She wears moto-jeans, a t-shirt, and a leather jacket, all snug verging on the too damn tight. Her bleach blonde hair brandishes dark roots, as if Harley Quinn missed a dye job. Her smile snags on a metallic grill that gives her shiny fangs that she pairs with a blasé attitude about spree killing, which she’s an expert at. Her skin is littered with tattoos, including one on her neck that offers bumper-sticker wisdom: “If you can read this you’re too close.” This is the level of clever Guns Akimbo is working on. While its chaotic mayhem, mad colors, and kooky characters are fun for a while, this ride is running on fumes by its climax, where the video game shtick hits tedium amid much bullet spray, blood bursts, and dick shots. Part of the problem is that Radcliffe and Weaving don’t have much chemistry. While he’s given a frantic nerd in over his head to play with, she’s given the over-it cool girl whose only emotions are bored and high and cocaine.

The best bits of Guns Akimbo are when Howden leans away from the well-trod video game tropes and fanboy fantasies and instead plays with the hilarious mundane issues Miles has to face as a man into Edward Pistolhands. Scenes where Miles tries to eat a hotdog, tug jeans over his rubber ducky boxers, or take his penis out to pee are all absolutely hilarious. There’s an electric tension to each instance, and Radcliffe throws himself into each bit with an egoless fervor. When Flight of the Conchords’ Rhys Darby pops up as a wild-eyed vagrant, Guns Akimbo offers a mix of sweetness, silliness, and squalor that is absolutely a blast. These two create a sense of spontaneity the rest of the film’s comedy lacks. When Radcliffe is doing slapstick or Darby seems to be riffing, it’s a delight, a weird, weird delight, but when the rest of the cast is asked to lob off a barrage of clunky one-liners between gun blasts, Guns Akimbo loses its spark.

Guns Akimbo made its US Premiere at Fantastic Fest.

← The Best Songs About Climate Change | Review: How Can a Movie Starring Nic Cage and Cocaine Be As Lousy as 'Running With The Devil'? →