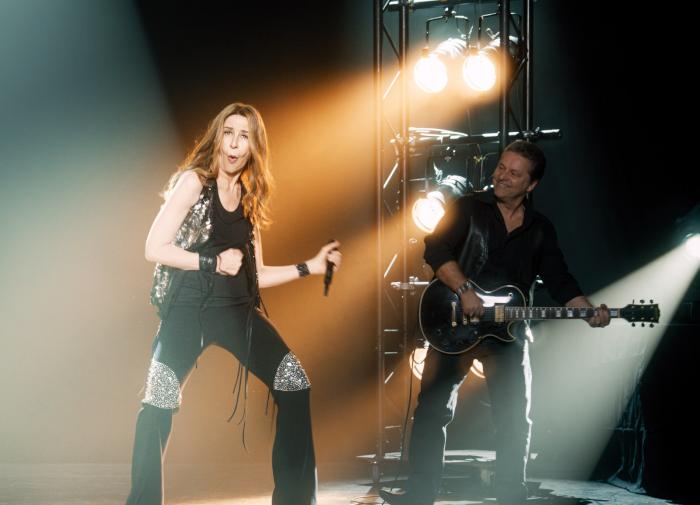 Once upon a time, a little girl grew up in a small Quebecois village with big dreams of becoming a singer. With the help of an experienced producer, she became a multi-million-selling superstar whose albums are some of the biggest sellers in world history. She fell in love with the guy who made her famous, had some kids, and lived a pretty nice life. And her name was Aline Dieu. Sort-of. You know who I’m talking about.

Aline is, for all intents and purposes, the biopic of Celine Dion’s life and career. It doesn’t hide that fact, even if all of the names are changed. An opening disclaimer tells us that the film is ‘inspired by the life’ of Dion but is ‘a work of fiction with various details modified ‘in keeping with the filmmaker’s vision.’ Said artiste is Valérie Lemercier, a writer-producer-director-actress-comedian who you may recognise from Les Visiteurs, the time travel comedy that is still one of the most successful films in French history. Here, she not only directs and co-writes the story of Dion/Dieu but plays her at every stage of her life, from five years old to her early fifties. Yes, Lemercier, who is older than Dion, plays a child. That’s one of many moments in this film that veer into territory that us critics professionally refer to as ‘buttf*ck bananas.’

It’s striking that Lemercier offers this reminder to viewers that details have been changed to keep this sort-of-biopic a work of fiction because the film itself is almost obsessively faithful to history. Dion has candidly described the minutae of her life and been followed around by the cameras since her tween years. If you know what you’re looking for then you’ll be able to spot how adoringly detailed this portait of Celine/Aline is. There’s the poor but loving childhood as the youngest of 14 siblings, the performance at (the unnamed) Eurovision Song Contest, the timed-to-the-minute Las Vegas residency workdays, and even the photoshoot for the cover of her ‘Taking Chances’ album cover. Lemercier herself knows her stuff, especially when she’s recreating Dion’s on-stage persona. She nails Celine’s self-aware goofiness and performance affectations, the presence of a woman who is half megastar diva and half poor girl done good. She doesn’t go out of her way to make herself look exactly like Dion (no prosthetics, mercifully) but there are moments when she could make for one hell of an impersonator.

But then there are scenes where she’s shrunk down to Hobbit sized and plays Aline as a child. That’s Lemercier’s blatantly adult face and voice on the body of a sinister miniature, twitching and gurning like an awkward pre-teen who may secretly be Martin Short in Clifford. The movie doesn’t draw attention to this as an obviously silly decision or moment of self-aware meta-biopic posturing. It’s totally earnest. You’re meant to find it adorable rather than wonder when she’s going to reveal herself as a character in a Wayan brothers comedy.

Did I mention that Lemercier won the Cesar Award for Best Actress for this role?

Aline may not come with the Dion estate seal of approval but it plays as though each scene was mandated by one of her lawyers (and given that some of Dion’s own songs are played here, one imagines that someone close to her approved the film in some capacity.) There’s no dirt here or anything that could remotely be seen as controversial. Sometimes, it feels like a faith-based movie, with Dion (changed to Dieu, which literally means ‘God’) treated like a saint in waiting. Part of this is because Dion has, admittedly, not lived a particularly shocking life or had the kind of dramatic experiences one would expect from a musical biopic. She didn’t deal with addiction or any kind of shocking career lows that necessitated a lavish comeback. While she did have a rags-to-riches glow-up, you wouldn’t think of Celine Dion as your go-to example of shocking true stories centered on musicians. That means that Lemercier spends a lot of time on pretty mundane beats. Any moment that could be even vaguely interpreted as prickly or complicated is glossed over entirely.

This, of course, includes Dion’s own marriage to René Angélil (here named Guy-Claude Kamar), her manager who she first met when she was 12 and he was pushing 40. Dion has always asserted that their story is one of true love and that she pursued him once she turned 20, but that dynamic has always raised questions and made even some of her most zealous fans uncomfortable. Aline plays the entire thing as true love, utterly uncomplicated by outside forces, while Guy-Claude is basically dragged into it by the teenage girl he’s in charge of. When Dieu’s mother chastises him for pursuing her, he says nothing happened, which she says is somehow worse because, if he had, then at least Aline could realize that she didn’t like sex with him (?!) This is the closest the film comes to real dramatic tension and it’s over in two scenes.

The pacing is messy, as one would expect from a film trying to fit over 40 years into two hours, but it’s tonally exhausting. Lemercier is clearly more at home with lighter beats (she’s best known in France as a comedic performer who does one-woman shows) where Dion/Dieu is performing, but then there will be a scene where she’s heartbroken over another failed IVF treatment and the shift to maudlin doesn’t land. Moments of self-aware camp (which is fully in line with Dion as a person), bring some needed levity. When post-makeover Aline gets her teeth fixed and hair chopped into a more modern style, she’s introduced to Guy-Claude in slow-motion with a wind machine while ‘Nothing’s Gonna Change My Love for You’ plays. The second half of the film goes by so fast that I wondered if my screener was accidentally skipping past key scenes. Guy-Claude’s cancer diagnosis and eventual death happen so quickly, as does the arrival of three children and about eight years of Vegas residencies. We don’t even see Aline perform all that much, and never a full number.

Aline has been a major critical and commercial hit in France, where it received more Cesar nominations than Titane. It’s definitely engineered to be a crowd-pleaser, especially for Dion fans who don’t care about more than seeing their idol be charming and goofy. There are moments that are so astoundingly weird that I couldn’t contain my slack-jawed awe at it all but for the most part this is actually a pretty conventional biopic. That’s why it’s so surprising that Lemercier went to the effort of changing the names and asserting its status as fiction. Take out the monstrous baby adult stuff and there’s not much here to separate Aline from any other film about a famous musician that exists mostly to sell records. You almost wish Lemercier went weirder or threw caution to the wind to really dig into stuff like Dion’s relationship with Angelil. Alas, what we have is much less radical than we could have hoped for. At the very least, it’s all very watchable and inoffensive, which is kind of the problem. Celine Dion’s music may divide people but she herself is hugely charismatic and goofy in ways most diva megastars simply aren’t. She makes for a great character and clearly Lemercier was drawn to that as a comedienne. But if you’re looking for a platform to unleash that kind of freneticism then you need to abandon the respectability of biopics and their painfully restrictive tropes.

Aline opens in American theaters in limited release on April 8.