What I’ve learned about my relationship with horror, a genre that I am a bit wussy about, is that my reactions are never really as straightforward as “like” or “dislike.” There’s a whole spectrum in between those two poles, and more often than not the movies that stick with me most are those that discomfort or disturb more than they straightforwardly scare. All of that is to say that A24’s latest horror offering, In Fabric, is unsettling as fuck, a movie with a number of bizarrely disparate composite parts that I keep puzzling over. Aggressively provocative, obsessed with the intersection between sexual pleasure and existential disgust, In Fabric is so unusual that it becomes unforgettable.

Filmmaker Peter Strickland has crafted In Fabric in the Italian giallo tradition, combining supernatural horror and eroticism in a film that practically bleeds color (think of Dario Argento’s offerings, including Suspiria, for a frame of reference). There’s blood-red everywhere; there are mirrors everywhere; there are shadowy corners and dimly lit rooms and secret compartments and barely closed doors and pitch-black nights. Many of the traditional elements of giallo are present, in particular the cerebral score from the German duo Cavern of Anti-Matter, and Strickland overlaps and transforms them into a film that is both quite literal and surprisingly figurative in its exploration of the term “fashion victim.”

In Fabric begins with the middle-aged, recently divorced bank teller Sheila Woodchapel (a wonderful Marianne Jean-Baptiste), whose patience with her life is wearing thin. Every day brings a new indignity. Her son Vince (Jaygann Ayeh) is, to put it politely, a self-involved asshole who ditches Sheila to visit her ex and his new girlfriend, and then questions Sheila when she mentions she might start dating again. His girlfriend, Gwen (Gwendoline Christie, playing a truly awful character with real relish), is astonishingly rude, especially when it comes to sex with Vince — she moans at ridiculous volumes, she leaves her fetish gear everywhere, she is passive-aggressive enough with Sheila to beat her at a friendly board game. And Sheila’s bosses at work are typical middle-management assholes, counting the minutes Sheila spends in the bathroom and solemnly telling her to work on her handshake. Everything sucks! 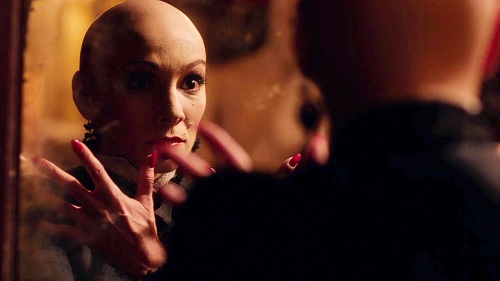 But that starts to change when Sheila, entranced by a commercial for the department store Dentley & Soper’s in which its clerks ritualistically beckon shoppers in, as if inviting them into a trance, stumbles upon a saucy red dress hanging all alone on a rack. The shade of arterial blood, crafted out of flowing chiffon, with a black feather applique at the wrap waist — it’s the exact kind of dress that pushes Sheila out of her comfort zone. She’s surprised it fits. She gets a new hairdo as a result. And although the first date she goes on while wearing it is a bust, and although Sheila develops a strange rash on her breast after she wears it, she doesn’t immediately return it. She bought it at such a good price! And the dress was one of a kind! It’s worth keeping … isn’t it?

The events that occur in Sheila’s life after she purchases the dress are complemented by glimpses into the behind-the-scenes machinations of Dentley & Soper’s, in particular those of store clerk Miss Luckmoore (Fatma Mohamed), who helped Sheila with her purchase. Dressed in a severe dress of black lace, with a tight updo and matching lipstick and nail polish, Miss Luckmoore is alternately clipped and cooing, encouraging Sheila to take a chance on herself and then exceptionally brusque when Sheila entertains a different purchase. For whatever reason, Miss Luckmoore wants Sheila to buy this dress and this dress only, and her behavior only gets stranger when we see her nighttime activities. Her carressing of the store’s mannequins. Her descent into the bowels of the store in a cramped dumbwaiter. And the sexually challenging vibe she shares with the store’s owner results in one of the most disturbing things I’ve ever seen in a movie, a scene that comments on female physicality, sexual performance, and consent and that is, well, fucking gross.

In Fabric’s purposes are twofold: to criticize and satirize the nearly supernatural hold consumerism has on our society, captured in the smug way Miss Luckmoore looks at crowds clamoring to shop the store’s sales and the spell-like feeling of the recurring Dentley & Soper’s commercial, and to probe at our strict definitions of work, sex, and etiquette. Sheila does everything “right” — she’s a committed employee, she’s polite to rude men on dates, she devotedly does Vince’s laundry, even when she finds in his bedroom numerous detailed drawings of Gwen’s vagina and anus — but that doesn’t protect her from being ensnared by Miss Luckmoore. And as that red dress makes its way through Gwen’s home, becoming increasingly sentient and floating around her bedroom, its randomness doesn’t dull the impact of its evil.

There is a sort of degenerative decadence to In Fabric, not only in how often it goes there, to a place of low-brow humor (example: a newborn baby, covered in blood and mucus, wearing a miniature version of the red dress and flashing her father the middle finger), but also in its thoughtful cinematography and composition, in the eerie movements of that red dress. I could not in any good conscience tell you that In Fabric is a horror movie that will win you over if you can’t sit through the first 15 minutes or so, because it only gets increasingly loopier. But for giallo fans in particular, the surreally voyeuristic experience of In Fabric is visually engrossing and unshakably uncomfortable.

← Saoirse Ronan and 11 Other Names You're Mispronouncing | Meghan McCain Says No One Should Play the 'Grief Card', The Meghan McCain →