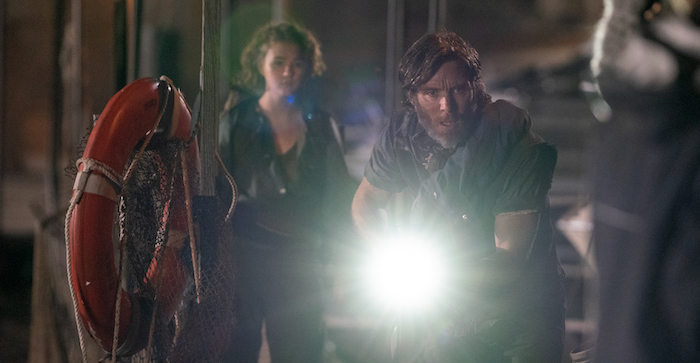 Review: 'A Quiet Place Part II' Is Just Like the First One, But with Cillian Murphy Upgrade

A Quiet Place Part II, the long-delayed follow-up to what was arguably the biggest breakout hit of 2018, opens where the first film left off. The surviving members of the Abbott family are preparing to leave their recently overrun homestead. It’s been a little over a year since man-eating alien monsters, who hunt exclusively by sound, first crash-landed on earth, bringing normal life to a screeching halt and bestowing a whole new depth of meaning to “silence is golden.” It’s also been approximately zero days since their illusion of relative safety at their largely self-sustaining farm was effectively vaporized following father Lee’s (John Krasinski, who also wrote and directed) heroic self-sacrifice to distract an alien who would have otherwise eaten his children for lunch.

With a newborn baby in tow, the freshly widowed Evelyn (Emily Blunt) decides she and her surviving children, Regan (Millicent Simmonds; excellent) and Marcus (Noah Jupe; mostly fills space), need to venture out in search of a new home. However, before the actual story gets started, A Quiet Place Part II can’t help itself but detour to a “Day 1” prologue.

This action-packed sequence of alien invasion mayhem begins with Marcus’ idyllic little league game being interrupted by the apocalypse. Its purpose is presumably to ret-con in the existence of family friend Emmett (Cillian Murphy), but it’s a bit of a flimsy excuse. Maybe 30 seconds of this extended prologue is dedicated to introducing Emmett compared to the several minutes devoted to giving Lee a chance to shine from beyond the grave and adding an exciting car chase scene for Evelyn. A little self-indulgent, this opening moves the narrative forward by approximately one millimeter. Still, it’s well-crafted entertainment that effectively gets a viewer’s adrenaline going. And for an audience watching this unfold on a big screen, who have overwhelmingly gone without for over a year at this point, it might as well be manna from the gods. (Oh theaters, how I’ve missed you.)

Paramount’s reasoning in holding out long enough to release A Quiet Place Part II in theaters is self-evident. Much like its predecessor, it’s truly a movie meant to be watched in cinemas. It operates on a visceral level above all else, so the size and quality of the screen and sound system are everything. If there was ever a movie to coax audiences back into theaters, it’s this one. Would it be opening to what I am sure will be generally positive reviews if we were all watching watermarked copies in our living rooms? Somehow, I doubt it.

Anyway, when the surviving Abbotts venture into the wide world, the first person they encounter is none other than Emmett, holed up on his lonesome in an abandoned factory. He’s clearly had a rougher time of it in the apocalypse than the Abbotts who, in addition to living on a farm that enabled them to be mostly self-sufficient, were all already fluent in ASL, as daughter Regan is deaf. Sign language is incredibly helpful in a world where being able to communicate without making noise has become a key survival skill. I would be remiss not to mention that the Abbotts are also armed with Regan’s cochlear implant, the feedback from which happens to conveniently be the alien’s kryptonite.

Emmett, by comparison, has lost his family, although the film plays it weirdly coy about what all went down. The point is that he has Seen Some Sh*t and is no longer here to make friends. Still, he begrudgingly allows the Abbotts temporary refuge in his decidedly less hospitable shelter, which primarily consists of taking strategically timed breaks in air-tight vaults. On the plus side, the vaults are monster-proof; on the downside, the whole air-tight bit means staying in one too long is as much of a death sentence as venturing outside. When Regan then goes AWOL, Emmett goes on a mission to retrieve her. Things snowball from there. If you’re wondering why she’s his responsibility, the only answer I can really give is because the movie said so, and leave it at that.

Is this turning into one of those movies where a plucky young heroine shows a jaded older dude how to consider regaining a smidge of faith in humanity? You might be wondering. Another one of those, really?! The thing is, Murphy manages to make Emmett’s journey compelling enough to feel satisfying, even though Krasinski’s script gives him one of the most generic character arcs one could imagine. In addition to directing, Krasinski takes over full writing duties here. (In the first film, he shared writing credits with Bryan Woods and Scott Beck, who came up with the original concept). While he’s undoubtedly a multi-hyphenate talent, screenwriting is really not Krasinski’s strongest suit.

Much like the first, A Quiet Place Part II has little dialogue, and there are definitely places that feel like they’re yearning for a little more explanation or character exploration. At least, until one stops to consider the dialogue that is here, which is terribly on the nose and prone to cliché. Perhaps the absence is best. Emmett’s character doesn’t fully add up on paper, but Cillian Murphy is the caliber of actor who can convince you of Emmett’s internal torment with just a look, and that skill proves particularly crucial here. He makes the character far more compelling than he has any real right to be. This movie is, if nothing else, a prime example of a film that’s truly saved by a very smart casting choice.

Overall, A Quiet Place Part II might just be about the most sequel-ish sequel to ever sequel, in that it’s basically a repeat of the original, only a little bit bigger and showier. If you enjoyed the first one, the premise, performances, and technical execution here are strong enough to still have a good time; if you weren’t a fan the first time around, this one won’t change your mind.

A Quiet Place Part II opens only in theaters on May 28th.

← What Is It with Heavily Armed Religious Fanatics and Compounds? | 'The Handmaid's Tale' Recap: I've A Feeling We're Not In Gilead Anymore →