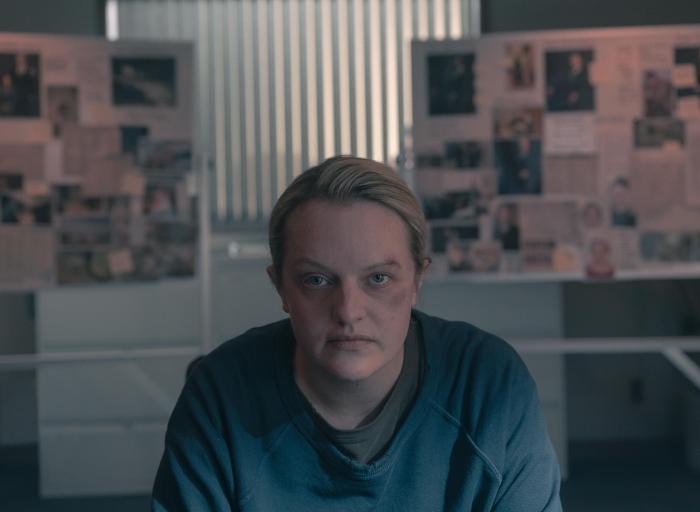 ‘The Handmaid’s Tale’ Recap: I’ve A Feeling We’re Not In Gilead Anymore

Previously, on The Handmaid’s Tale: Moira smuggled June out of Chicago with the reluctant assistance of her girlfriend Oona and her crew. Everyone is mad about it, for annoying reasons, except Moira and Luke, because they are precious and must be protected at all costs. Here’s my recap for episode 6 if you missed it!

This week: June’s a free woman, but it’s definitely not sunshine and rainbows… Can Moira and Luke put June back together again? Does she want to be put back together again? And is she ruining Canada? There are spoilers ahead for episode 7; let’s grab some healthy potato chips and pray that once again, Moira is right…

In an easier show, June’s arrival in Canada would lead to a party, much rejoicing, some emotional hugs, and some gentle musical vibes. A bit of Bublé, maybe. Let me go home! And they all lived happily ever after! Yeah, that’s not the way this show works. It’s much more realistic — I mean, who hasn’t had an episode of culture shock in a foreign supermarket when all you want to find is some orange squash and you are sent to the produce aisle, and you’re confused and sad and a bit angry because you just wanted some concentrated juice, damnit… Ahem. Moving on.

This being The Handmaid’s Tale, everything is bleaker than you’d like, as characters try to gauge how much is broken. Relationships, spirits, minds… June’s gone from murderous rampage to ‘hey, cuddle the baby and let’s have pancakes’ in a matter of moments, and that’s enough to give anyone emotional whiplash. Did anyone have ‘June turns into Serena’ on their bingo card though?

Everything is different for June in Canada. The clothes, the people, the working lock on the bathroom door; the fact that she can take a shower, look in the mirror, order room service, choose to sleep in… It’s all good in theory, but it’s overwhelming and awkward. People are nice to her. Their happiness and relief seem so foreign. She feels like a spare part in the household. She doesn’t know how to act with Luke. She’s plagued by PTSD flashbacks, survivor’s guilt, and that pesky culture shock. Her rage has nowhere to go, and it’s almost anticlimactic. It also brings the pace of the season to a crushing halt.

She seeks comfort in the familiar, which means fellow refugees from Gilead like Rita and Emily, because she knows where she stands with them, and their haunted faces seem closer to her own.

“Do you guys ever feel like you deserve this?”

Traumatic rage is like needing to pee; you can only hold it in for so long before it makes a mess. June can hold it for a while when talking to her friends, but when she hears that Serena is pregnant… Oof. Her rage bladder is ready to burst. Who is she going to aim it at?

Let’s catch up with Tuello and the Waterfords for a second, to put the Incoming Pee-Rage into context. Mark Tuello is practically giddy to see June at the start. Not only does she have valuable intel, but her presence is going to make the case against the Waterfords much more powerful. He definitely enjoys his visit to Serena, and again, his motives seem odd. He wants Serena to get Fred to co-operate, saying it “could help both of us”, and it’s unclear why. Is it because prosecuting Fred would be a great win for him? And Serena could throw Fred under the bus in the process? Or is he up to something?

Fred is still absolutely insufferable and without any redeeming features. He still calls June Offred. He wants Serena to team up with him, so they can protect each other from June’s inevitable witness testimony, and at first, the idea repulses Serena. Then Tuello brings Pee-Rage June in for an impromptu visit, knowing that she “wants to hurt” them. Tuello is playing three-dimensional chess here, folks.

I don’t intend to be a Serena apologist, because she’s awful, and her desire to make amends is entirely self-serving and punchable. It’s not a bad thing that June gets to confront the person who tormented and abused her. However, the aim is surely to heal from the process and find peace, right? Is that the choice June makes? Is it heck. Pee everywhere.

“I brought myself here so I could tell you how much I hate you. You don’t deserve to make amends to anyone. The only thing that you deserve is a life full of suffering and shame. You have destroyed my life, my family, my friends, my country and my child.”

OK, Serena did a lot of that, but not all of it. She’s just the handy nearby face of the rest of it.

“There is no-one less worthy of redemption than you.”

“Do you know why God made you pregnant? So that when He kills that baby inside your womb, you will feel a fraction of the pain that you caused us when you tore our children from our arms. Do you understand me? DO YOU UNDERSTAND ME?”

WHOA! With that final blow, she wipes the Rage Spittle off her chin and stalks away. Was this her dracarys moment?

June’s confrontation with Serena has some pretty earth-shattering consequences. Earlier in the season, June took on an Aunt Lydia role with the Handmaids, but now she is using Serena’s scream-rant from season 1 as a playbook, which does not bode well. Is it meant to be poetic justice? Because it seemed more like someone trying to reclaim some power by belittling another. Serena is not powerful in Canada; June wanted to scream at Gileadean Serena, not Canadian Prisoner Serena. It’s telling that she screams at Serena, not Fred; even now, the women are turning on each other. What’s worse is that this makes her feel good. It feels familiar, even though the roles are flipped. It seems to heal her, even to arouse her. Did she get it out of her system? Or is she associating cruelty with healing? Because that also does not bode well, and damnit, Canada is meant to be my Handmaids Happy Place, and she’s making it all murky!

The consequences don’t stop there. Now that June has screamed at Serena, Serena’s vulnerable, and suddenly an alliance with Fred seems preferable to facing the wrath of June alone. Sigh. Then there is the thing with Luke… So, June’s a rapist now? I don’t see any other way of reading that scene, with her pinning him down and silencing his objections with her hand over his mouth. This is not a rom-com moment of healing. The confrontation with Serena has made her feel powerful, and she is using that power to be abusive.

The show cements June’s transformation into Serena at the end by laying June and Tuello’s dialogue about Serena over a montage of scenes that include June, Luke and Nicole. Who is she really talking about, huh?

June: She’s pathological. She’s a sociopath. She’s toxic and abusive. She’s a monster. And by the way, a consummate actress.

Tuello: What do you think drives her?

June: Hatred and rage. And underneath all of that, there’s nothing but pure misery. And she’ll do anything not to feel that way. Anything to feel OK. Just for a second. She’ll do anything to get what she wants. Lie to you. Hurt you. Rape you. So if you feel yourself getting sucked in by her, run. Run for your life.

It’s clear as the episode ends, that June is not OK. She might never be OK. After all, it’s not that kind of show.

Next time: June prepares for her day in court, and Moira tries to get her some therapy instead. (Moira is always right!)

← Review: 'A Quiet Place Part II' Is Just Like the First One, But with Cillian Murphy Upgrade | The Big Future Reveals in the 'This Is Us' Season 5 Finale →