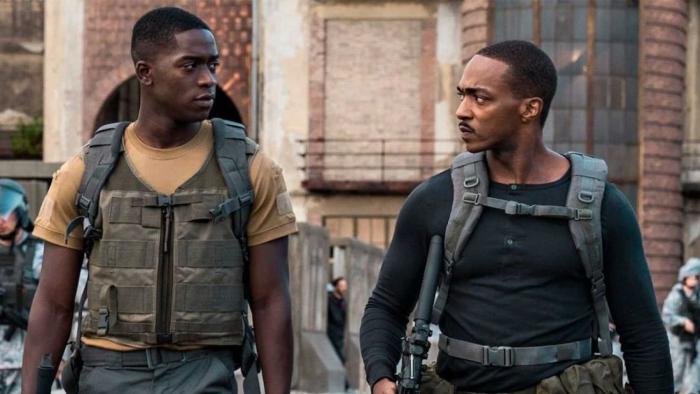 Outside the Wire Review: Wow. So Cinema. Such Deep

From its advertising, Outside the Wire seems like a straight to VHS movie from 1994 that you only rented from Hollywood Video because the box used the same font as a similarly titled but entirely different movie featuring uninspired firefights and vaguely Russian villains. I can assure you though that this movie is infinitely more boring than that, because that movie probably at least had some awkward humor to pass the time.

Anthony Mackie stars as a robot built to look like a soldier. You can tell he’s cool though because he listens to jazz on old records. Also, he turns into see-through plastic and when he runs he does the Robert Patrick Terminator run. The run is the main thing, they didn’t have the special effects budget to have more than 60 seconds with his nifty tinker toyness on display.

But the important thing is that he has the rank of captain so that way his sidekick can ALWAYS call him “Cap” and that way when he tortures a dying sniper for information he can sneer, “I can do this all day” and you can be amazed at their clever interrogation of Captain America’s military-industrial complex origins through the lens of an actor portraying the new Captain America. Wow. So cinema. Such deep.

And not a single goddamned Skynet joke in the entire run time. Credit where it’s due though: they’ve got automated robot soldiers — think Johnny 5 before he was alive — and they call them Gumps. That is amazing, and I demand that when we do have robot soldiers we call them Gumps. That is literally the only original and clever thing in the entire movie.

Oh, there’s the other guy too. Harp. He’s an Air Force drone operator in Nevada who disobeys a direct order and is therefore punished by being sent to serve with the Marines in the peacekeeping force in Ukraine. Upon arrival, he immediately leaves to go behind enemy lines with the T-1-Mackie, like literally not even putting his backpack down. Which, is not how anything works, but OK. They explain how awesome he is that he has 56,000 flight hours as a drone operator. Which means that he has been flying drones as a full-time job for 27.5 straight years with no vacation. Yes, I did the math. Because someone should.

There’s a whole story about old Russian nuclear weapons that somehow are still functional after 50 years of not being maintained, and the codes for them being in the vault of a bank for no discernable reason. Pirate Joshua Jackson from Game of Thrones shows up for a few minutes to be like, “ooh I killed Jaime Lannister and now I’m going to nuke America” but none of it really makes any sense or matters. It’s all just excuses to run around in circles with terribly directed firefights and faux betrayals on top of betrayals. Let’s just say it took me six hours to watch this two hour movie, because it was truly abysmally painfully boring.

It’s made worse by the fact that it thinks it’s way more important than it actually is. Outside the Wire likes to think that it’s a meditation on American interventionism and the sanitized dehumanization of warfare due to drones and automation. Funny then how a movie sets out to condemn Americans for not understanding realities on the ground in their interventions while simultaneously failing to demonstrate even a skimmed Wikipedia page’s knowledge of the actual setting of the movie.

It’s set in Eastern Europe’s civil war. Yep. They print that on the screen in the lengthy video game style montage introduction to the movie. That big ol’ country of Eastern Europe. It’s my second favorite movie country after Africa.

Half an hour into the movie they finally establish it’s supposed to be Ukraine. Which they refer to as The Ukraine because they didn’t do three seconds of research. Also, the big terrifying bad guy is called the Terror of the Balkans because of blowing up a dirty bomb in Kiev. Know what’s not in the Balkans? Kiev. Or Ukraine.

But that’s OK, the leader of the “Resistance” is an English woman, accent and all. I am legitimately curious whether the filmmakers had an actual story in mind why a Brit was in charge of the Ukrainian insurgency or if they actually think the British Isles are in Eastern Europe.

To top it off, the big bad guy is a Russian named Victor Koval, so naturally there is graffiti everywhere with a stylized VK and his henchmen have VK tattoos. In Latin characters. They spent millions of dollars making a movie set in Eastern Europe and have never heard of Cyrillic.

At one point, Mackie has an extended soliloquy about why he was designed to look the way he was. He explains that the reason he is not “a blonde haired and blue eyed superman” *cough Steve Rogers what cough* is because he was specifically given this face so that he would seem more neutral and could therefore infiltrate better. Ah yes, because a Black guy who doesn’t speak Ukrainian but can throw tanks is the best way to be incognito in rural Ukraine.

As an actual professor of Eastern European politics, I literally have no idea what parts of the movie are honest ignorance versus ironic ignorance.