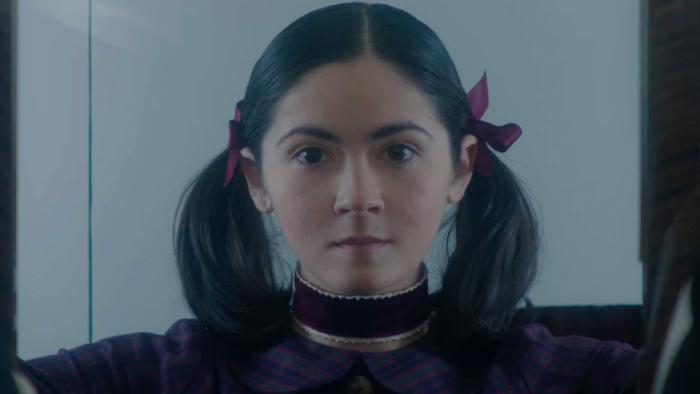 'Orphan: First Kill' is so Much Better Than it Has Any Business Being

It’s been a lucky thirteen years since audiences met Esther, or should we say, Leena (Isabelle Fuhrman), the sneaky Estonian psycho. In Orphan, the story of an adopted young girl with a rage problem is interrupted by the startling twist that she was a thirty-three-year-old woman with a disorder that makes her appear to be ten years old. And, of course, that woman is an extremely violent murderer who kills for more reasons than just survival. To make a worthwhile prequel doesn’t seem too tall an order; give audiences the backstory of the vicious woman in pigtails and make sure to add some blood and fire. But Orphan: First Kill took every route but the easy one and made a prequel that is much better than it has any business being.

Isabelle Fuhrman is back as Leena, in the first of many surprises that shouldn’t work but totally do. In 2007, Leena escapes the Saarne Institute and disguises herself as a missing girl, Esther Albright. Weaseling her way into the Albright family, Esther balances her desire to rob them and run with her desire to be a part of the family and to attract the wiles of the father, Allen (Rossif Sutherland). But Leena can’t shake the suspicious eyes of the detective who’d been searching for Esther, nor those of her new family, and soon the pressure forces her to crack. Then just when you’ve let your guard down and settled into the low expectations you might have had for a prequel to a middle-of-the-road popcorn horror flick, the movie sneaks up on you with a bullet to the chest in the form of a mid-movie twist.

Orphan: First Kill could have played it safe and still would have done enough to be worthwhile. It has everything a good horror prequel needs; it starts from a known ending and works backwards to create a story with enough freshness to be worthwhile. It splashes around arbitrary beats that explain character traits that we know from the first installment. But what makes this bonkers prequel so exceptional is that it did all of that, then went harder than hell. By exploiting your comfort in the formula and your tempered expectations, Orphan: First Kill is able to slam the gas pedal and jolt your limp body forward.

The plot isn’t the only thing audacious about the affair. Bringing back a now adult Fuhrman as the woman who looks like a child seems like a job for gawky CGI. But, instead, the filmmakers chose to use old fashioned tricks (seriously, Peter Jackson, what’s good?) to have Fuhrman play the role just as herself. The innovative ways in which Fuhrman is swapped in and out with her child body doubles are nothing short of movie magic, and the movie lets you in on the gimmick without it ever being distracting. It’s that balance of clean inventiveness and camp that make so much of the movie work, especially the finale which rubs in your face just how much fun that all can be.

And it was, of course, worth bringing Fuhrman back who has absolutely still got it. Her performance as the spooky girl in ribbons is unmatched and it was a thrill to see her again. She is further bolstered by her new foil in Julia Stiles. Vera Farmiga, horror’s mom, is a tough act to follow and Stiles is brilliant in a dynamic performance we’re not used to seeing from her. A woman usually cast as a damsel in distress, Stiles is here able to show so much more of what she can do and looks like she is having a good as hell time doing it.

Horror prequels in this camp don’t have to do a lot of extra work. Cohorts of an Orphan prequel aren’t the surprising ones like Final Destination 5 or Jigsaw, but more the by-the-numbers “fine” movies like Brahms: The Boy II (which shares director, William Brent Bell). Orphan: First Kill could have just been a feature length version of an in-world newspaper article, but it chose to do more. Your move, Pearl.