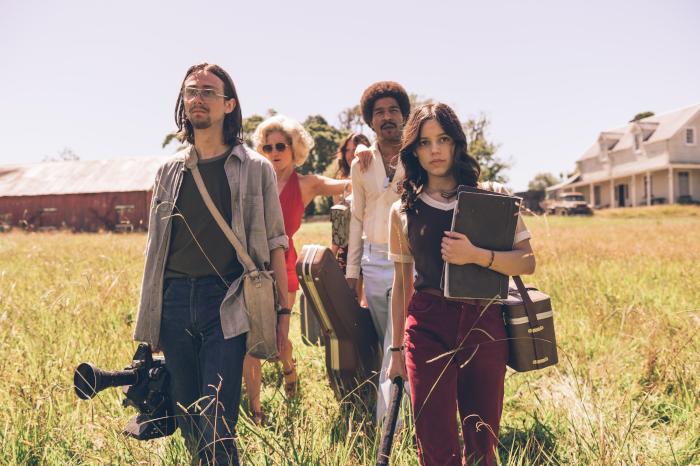 It’s been about six years since horror director Ti West put out a movie, that one being his underwhelming revenge western In a Valley of Violence starring Ethan Hawke and John Travolta. West directed some scattered episodes of television during that time—a couple episodes of The Exorcist show here, a wonderful episode of Amazon’s sci-fi wonder Tales From the Loop series there (sidenote: if you’ve never watched Tales From the Loop go watch Tales From the Loop right now)—but word was that West was thinking about never making another movie at all. That has thankfully turned out to be a false alarm, as hitting theaters this weekend thanks to the fine folks at A24 comes X, his latest incendiary slow-burn nightmare that proves he’s one of the genre’s finest low-budget magicians. I couldn’t get home to take a shower quick enough, in the best way.

Although there’s much to be liked about West’s early films—The Roost from 2005 and Trigger Man from 2007—it was 2009’s The House of the Devil where he made his name, and with excellent cause. A lo-fi 80s pastiche that felt like nothing else in that moment of Exxxtreme Bro Horror, The House of the Devil actually felt like a movie transported straight out of 1981—mainly because, besides the nostalgic ambiance of freeze-frames, that film, which still holds up splendidly, actually took its time establishing its characters. And with fine actors like Jocelin Donahue and Greta f’ing Gerwig as its leads we were more than thankful to watch them take their time, too. Then West doubled down on these excellent instincts with his wildly underrated follow-up The Innkeepers, which is as far as I’m concerned a modern ghost story classic. (Go find and watch The Innkeepers right now, if you’ve never seen it!)

Unfortunately The Innkeepers didn’t do great money- or buzz-wise though, and West’s career went a little bit sideways after that—he did decent segments for the two horror anthology series of the moment (V/H/S and The ABCs of Death), and then came 2013’s found-footage cult freak-out flick The Sacrament, which dropped journalists (played by mumblecore mainstays Joe Swanberg and Amy Seimetz) into a barely fictionalized retelling of the Jonestown Massacre, with to my-mind mixed results. I always find fictionalized horror retellings of non-fictional real-world horrors problematic, and The Sacrament didn’t do anything to dissuade me of this impulse—indeed it just double and triple underlined most of my discomforts about that storytelling technique. It’s kinda akin to setting a Slasher Movie in the “Windows on the World” restaurant as the Twin Towers were falling. Sometimes bad taste is just plain old bad.

But here we are almost a decade later and X, hallelujah, finds Ti West reclaiming most of his mojo. A deep-fried scummy Texas tale that summons up all of the grimy goopy 70s Tobe Hooper feels—most obvious (times twenty) it’s The Texas Chain Saw Massacre, but there’s also a good dose of Hooper’s ribald alligator epic Eaten Alive here for good measure—the first thing we hear is the buzzing of flies, and the next thing we see are the reddest, wettest guts splattered across the highway. They belong to a big dead cow who just got split open by a tractor-trailer truck, but natch it won’t be long before all the fine folks we’re about to meet on our journey start getting turned inside out themselves much the same. I tell you that this is a mighty gory one; you have been forewarned!

Also on board we have RJ’s girlfriend Lorraine (played by Jenna Ortega, who has snatched this year’s title of Scream Queen thanks to this movie, the Foo Fighters horror flick Studio 666, and Scream 5) who’ll be handling boom duties (in more ways than one), and the horned-up twosome of Bobby-Lyne and Jackson (played by a very funny Brittany Snow and a bemusedly low-key Kid Cudi), the latter there on hand to supply the almighty appendage that will make all of this “art” possible. And then some, as we see here in shadow—the Year of the Male Member gains a prominent new, you know, member, with this one. Anyway, it’s crazy refreshing that this Deep Throat era throwback spends as much, if not more, time ogling its menfolk as it does its ladies—equal opportunity horniness, baby!

So Producer Wayne has rented a ramshackle boarding house in the middle of nowhere to shoot this milkmaid epic in, only he didn’t quite tell the truth of their intentions to its owner Howard (Stephen Ure), a man so old his sporadic teeth seem to be sprouting white hairs. Still, as long as they can keep the old man at bay while they fashion their smut—not to mention the several pairs of ancient, patient eyes that seem to always be watching from the sidelines—ssssssss’all good, baby. Of course … he doesn’t, they don’t, and it all goes horribly, terribly, very not well and stupendously wrong, in ways you both will and will not see coming from a mile away. West does an excellent job with presenting multiple dangers early on and then teasing them out to extremely uncomfortable levels just by making us wait for the shoe we see dangling, dangling, dangling, to finally drop — the man knows his suspense bonafides, and X is tension manifest.

I imagine X will play like a very different movie depending on each audience member—there are themes of love and commitment smashed up against ones of youth and sex that will sort themselves out in individual ways, perspective-wise, which I find a fascinating reach for a sweaty swarthy midnight meat movie throwback. And it’s not accidental, either—characters have these exact conversations early on in the film, and then the film demonstrates and defenestrates and decapitates all angles of its arguments, pro and con and recklessly contradictory. I will admit that I did take issue with some of what it deems “scary” or “disgusting” at key points, but West lavishes so much sympathy on his eventual “monsters” here that the movie seems primed to deflate your takes before you can take them very far. Basically, I’m being vague out of fear of spoiling the movie’s final act, but just know this gory Guignol churns up your brain matter as much as it does all them guts, with even some sweet, tender heart tossed into the grinder to boot.