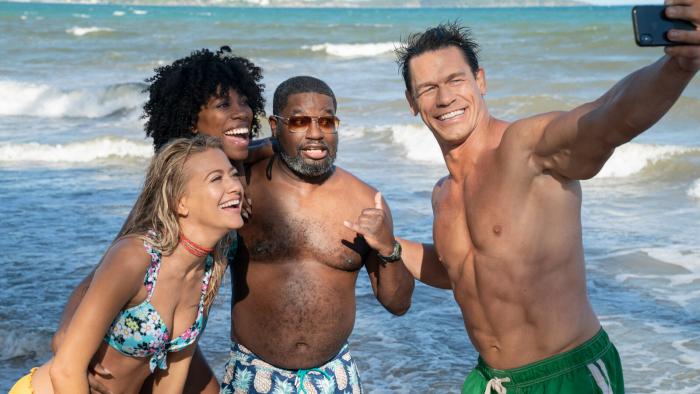 Now on Hulu: 'Vacation Friends' Is Passable, But It Doesn't Deserve to Be

If I could carry the conceit for the entire article, I’d review the passable Vacation Friends with as much enthusiasm as I could muster: “OMG! Vacation Friends is CRAZY ordinary! I cannot believe how average it is! It’s a tour de force of mediocrity! A roller coaster of indifference that zips along in a straight line without a single hill or twist! It’s the most middling movie of the year!”

Vacation Friends is a tolerable comedy, at best, but don’t tell that to the cast, who throw themselves into the film with the energy of a coked-up rat eating through that extra bag of dog food you threw in the basement. They are into it, so much so that you’d almost be forgiven for not noticing how lackluster a comedy it is. It’s the movie equivalent of one of those old Robin Williams talk show appearances where he was so manic and enthusiastic that it almost didn’t matter if the material he was delivering was lousy. Then again, this is not a seven-minute appearance. It’s an hour and a half movie, and not even Robin Williams could have carried this stinker.

Lil Rel Howery (so good in Bad Trip) and Yvonne Orji (Insecure) play Marcus and Emily, respectively. They’re a couple whose relaxing vacation in Mexico nearly unravels when they discover that their intended hotel room is destroyed by an overflowing jacuzzi in the couple’s room above them. That couple, Ron and Kyla, is played by John Cena and Meredith Hagner. When they realize they’ve ruined Marcus and Emily’s vacation plans (and Marcus’ proposal), they invite them to stay with them in their giant suite.

Despite the initial reluctance of Marcus and Emily, they eventually allow themselves to get caught up in the drug-fueled shenanigans of Ron and Kyla. They wreck a yacht; they cliff-dive; they jump in a wrestling ring; and they do a lot of drugs, ending eventually with a wild, black-out night where the couples may or may not have swapped partners.

The first act ends with Ron and Kyla vowing to be lifelong friends to Marcus and Emily, while Marcus and Emily throw away their phone numbers and decide to let their Mexican vacation stay in Mexico. Ron and Kyla, however, track them down and show up at their wedding seven months later, expecting to be the best man and maid of honor. Marcus and Emily, however, are mortified that their vacation friends would show up to their formal affair, but Emily’s father (Robert “Bunny Colvin” Wisdom) — normally disapproving of Marcus — bonds with Ron, and so an entire wedding weekend of wacky (sometimes drug-fueled) hijinx ensue.

It’s a dumb movie, and mostly dead on arrival, but the cast doesn’t realize it, gamely running around like chickens with their heads cut off. Rarely have I seen four actors so determined to rise above the material, and to their credit, they do. They’re gallivanting around on the sixth floor, but the script is down in the subbasement growing mold with the other ’00s rejected scripts written with Vince Vaughn and Owen Wilson in mind. The energetic performances don’t make it a good movie by any stretch, but it does make it one that’s hard to hate.