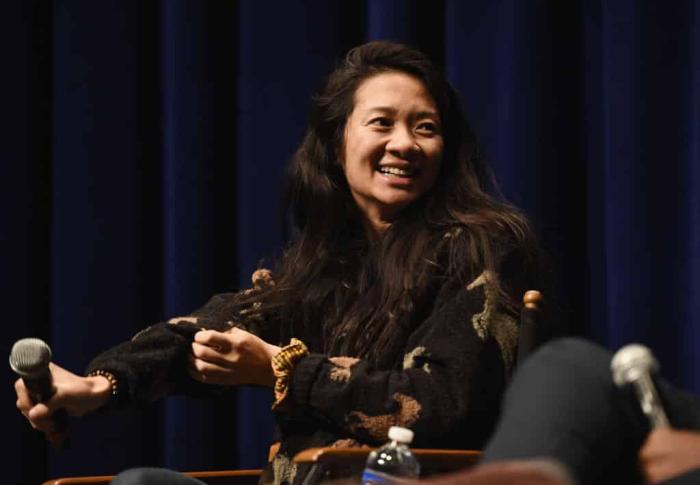 2021 Films Directed by Women to Look Out For

2021 is finally here, and maybe we’ll get some good movies with it? 2020 and all the carnage that accompanied it brought the entertainment industry to a complete halt. Many films saw their releases pushed back, shifted to streaming, or disappeared altogether. Yet, despite all that, women directors still completely crushed it in 2020. For those who pay attention, female filmmakers have been killing it for a long time (as we’ve noted over the past few years in similar posts), but now, it feels like even the dinosaurs in Hollywood are taking notice. There’s still a lot of work to do, but you can forgive us for being excited for the future. Here are just some of the 2021 films directed by women that we’re excited for. This is by no means every single title, so if there’s something we’ve missed that you’re amped up to see, let us know in the comments. Also, given the continuing state of precarity that we find ourselves in, all of these release dates are subject to change.

NOMADLAND
Dir. Chloé Zhao
Logline: ‘Based on the nonfiction book by Jessica Bruder, Nomadland follows a woman, played by Frances McDormand, who decides to adopt a traveling lifestyle after losing her job and social safety net.’
Why we’re excited: Zhao has already cemented her position as the frontrunner in this season’s very peculiar Oscar race. Nomadland has been rapturously received across the board and became the very first film to win both the TIFF Audience Award and the Venice Film Festival Golden Lion for Best Film.
Release date: February 21.

CINDERELLA
Dir. Kay Cannon
Logline: ‘A modern-day re-imagining of the classic fairy-tale, this time with an all-star cast that includes Camila Cabello, Billy Porter, John Mulaney, Minnie Driver, Idina Menzel, and Missy Elliott. And also James Corden.
Why we’re excited: While the presence of James Corden in a musical gives us a certain level of unease, we’re always amped up for an original movie musical that isn’t a Disney property. Besides, who can resist John Mulaney as a mouse turned beleaguered footman?
Release date: February 5.

BLACK WIDOW
Dir. Cate Shortland
Logline: Natasha Romanoff finally gets her solo movie in the MCU. Following the events of Captain America: Civil War, the eponymous Black Widow finds herself dealing with the darker corners of her past.
Why we’re excited: A lot of Marvel fans have waited a very long time for Scarlett Johansson to get her leading moment in the franchise, and the COVID delays have only made those feelings stronger. Regardless of one’s many complicated feelings regarding the actress and her increased inability to stop putting her foot in her mouth, Johansson is still an excellent Natasha and deserves to go out in style. She’ll be assisted in her endeavor by a murderer’s row of talent that includes Florence Pugh, Rachel Weisz, David Harbour, and O-T Fagbenle.
Release date: May 7.

RESPECT
Dir. Liesl Tommy
Logline: Jennifer Hudson stars as the legendary Aretha Franklin in this biographical drama about her rise to fame and status as one of the all-time greats.
Why we’re excited: Aside from the fact that Team Pajiba is one degree separated from the impeccable Tony-nominated Liesl Tommy? Well, musical biopics are tricky territory, but we can’t say no to the chance to hear Hudson, who was hand-picked for the role by Ms. Franklin herself, sing some of the most iconic numbers ever written.
Release date: August 13.

CANDYMAN
Dir. Nia DaCosta
Logline: Chicago’s Cabrini Green neighborhood was terrorized by an infamous ghost story for decades, and now that the area has been heavily gentrified, the spirit of Candyman holds greater thrall than ever. A visual artist now living in the Cabrini area latches onto the urban legend as inspiration for his paintings, unknowingly opening up a dark past and new era of terror.
Why we’re excited: We’ve been waiting ages for Nia DaCosta’s sequel-slash-reimagining of one of 1980s horror’s greatest titles. Clive Barker’s source material is rich for expansion and further development of its deeply Black inspirations, and who better to revive that than DaCosta and Jordan Peele’s Monkeypaw Productions? We can’t say no to a cast that good either, with an enviable ensemble that includes Yahya Abdul-Mateen II, Teyonah Parris, Colman Domingo, and Tony Todd back in the lead role.
Release date: August 27.

ETERNALS
Dir. Chloé Zhao
Logline: The Eternals, an immortal race of aliens who have secretly lived on Earth for over 7000 years, must gather together once more to protect humanity from the power of their evil counterparts.
Why we’re excited: COVID may have briefly delayed the domination of Zhao but it can’t stop her growing status as a critical and inevitably commercial darling of Hollywood. Now that the MCU is in its post-Endgame phase, its focus has turned to the cosmic, and even superhero skeptics have to confess some curiosity as to how Jack Kirby’s notoriously trippy Eternals stories will translate to the big screen. It’s one hell of a cast too, even by Marvel’s standards, with Angelina Jolie, Salma Hayek, Kumail Nanjiani, Richard Madden, Lauren Ridloff, Brian Tyree Henry, and Ma Dong-seok set to don their capes.
Release date: November 5.

THE MATRIX 4
Dir. Lana Wachowski
Logline: The plot is currently unknown.
Why we’re excited: Neo’s back, baby! The Wachowskis helped to irrevocably shape the face of modern cinema, and even at their weirdest and with their most noble failures, the directors always offer something wholly unique. While Lilly has taken a step away from the spotlight, Lana has returned to the franchise that made them famous, along with Keanu Reeves in the lead role. Whatever happens with the Matrix 4, we can guarantee that it’ll be unlike anything else out there.
Release date: December 22.

FEAR STREET
Dir. Leigh Janiak
Logline: Based on the teen horror books by R.L. Stine, Fear Street follows a group of teenagers in 1994 who find out that the terrifying events that have occurred in their town of Shadyside, Ohio, may be connected to each other.
Why we’re excited: We’re all in on women-directed horror, especially films based for younger audiences. Netflix is doing things a little differently with Fear Street, which will be a trilogy of movies released in quick succession.
Release date: Expected to be released in mid-2021.

BRUISED
Dir. Halle Berry
Logline: Berry stars as a disgraced former MMA fighter fighting to get back on top and be a better mother to her six-year-old son.
Why we’re excited: Critics didn’t get to see Bruised when it premiered at TIFF last year, but the buzz was high for Berry’s directorial debut, especially once Netflix dropped an eye-watering reported $20 million for the rights.
Release date: Expected to be released in mid-2021.

MOXIE
Dir. Amy Poehler
Logline: A teen girl takes inspiration from her former Riot Grrrl mother and create a feminist zine that becomes a surprise hit among her classmates.
Why we’re excited: Poehler clearly loved Jennifer Mathieu’s YA novel enough to give it a glowing cover blurb upon release, and now she’s bringing it to the big screen via Netflix. We’re all in on some girl power, both vintage and modern.
Release date: Expected to be released in mid-2021.

MY FATHER’S DRAGON
Dir. Nora Twomey
Logline:Run-away Elmer Elevator searches for a captive dragon on Wild Island and finds much more than he could ever have anticipated.
Why we’re excited: Cartoon Saloon is releasing some of the best animated films of the century so far, including one of Pajiba’s favorite films of 2020, the impeccable Wolfwalkers, so we’ll follow them to hell and back if they so desire. Their newest movie is adapted from a children’s book from 1948.
Release date: Some time in 2021.

THE POWER OF THE DOG
Dir. Jane Campion
Logline: Based on the Western novel by Thomas Savage, the story follows a pair of brothers who are joint owners of the biggest ranch in their Montana valley. When one of them marries a young widow and brings her to live on the ranch, the other launches a campaign to systematically destroy her.
Why we’re excited: Two words: Jane Campion. The only woman to ever win the Palme d’Or — — and only the second ever to be nominated for Best Director at the Oscars — Campion hasn’t made a feature film in over a decade. She’s one of the true monarchs of period dramas, however, and with a cast that includes Benedict Cumberbatch, Kirsten Dunst, Jesse Plemons, and Frances Conroy, we’re thrilled at the prospect of her taking on the American frontier in a way that only she can.
Release date: Some time in 2021.

THE NIGHTINGALE
Dir. Mélanie Laurent
Logline: Two sisters struggle to survive and resist the German occupation of France during the Second World War.
Why we’re excited: French actress Laurent has built up a solid reputation as a director, and now she’s bringing together the Fanning sisters, Dakota and Elle, to play the very juicy leading roles in this adaptation of the novel by Kristin Hannah.
Release date: December 22.

DON’T WORRY DARLING
Dir. Olivia Wilde.
Logline: An unhappy housewife in the 1950s discovers a disturbing truth, while her loving husband hides a dark secret.
Why we’re excited: 18 studios went to war to bid for the rights to this screenplay, which quickly became the next project for Olivia Wilde following her beloved directorial debut, Booksmart. This film is currently shooting and might be the most buzzed-about production in the industry right now, thanks to a cast that includes Best Chris Pine, Florence Pugh, Harry Styles, Gemma Chan, Nick Kroll, and KiKi Layne.
Release date: Maybe 2021?

THE LOST DAUGHTER
Dir. Maggie Gyllenhaal
Logline: Based on a story by Elena Ferrante, the movie follows a woman who gradually becomes obsessed with another woman, prompting memories of her own youth to haunt her afresh.
Why we’re excited: Maggie Gyllenhaal is a brilliant actress who seldom gets the credit she deserves. Now, she’s sitting in the director’s chair with an adaptation of a book Italy’s most enigmatic author. The combination of Olivia Colman and Jessie Buckley as the same woman is too good to resist.
Release date: Maybe 2021?