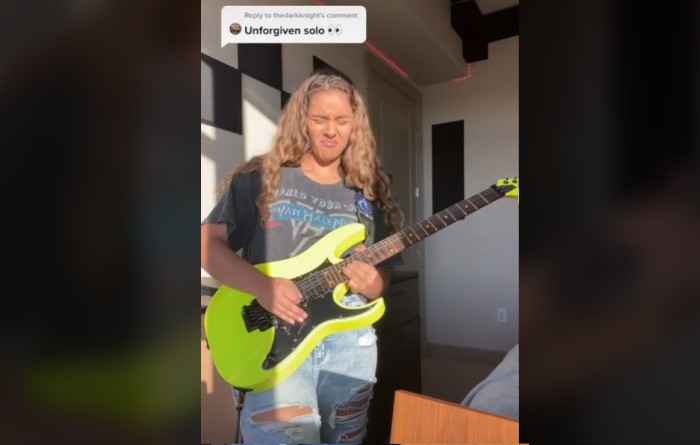 This is a scenario I’m sure many women can relate to:

Zaria, an R&B vocalist and dancer, is a TikTok star. Recently, she appeared in some of her TikTok dance videos while wearing a Metallica t-shirt.

And so, naturally, the male sneering and gatekeeping began, with comments along the lines like of ‘name 3 Metallica songs’ and ‘somehow I doubt you like Metallica’ appearing as if on cue, like parasitic worms burrowing their way out of the woodwork.

Do you remember a few years back when ace programmer and Victoria’s Secret model Lyndsey Scott took to Instagram to respond to the misogynist trolls who tried to diminish her programming skills? There had been a post written about Ms. Scott on the Instagram page ‘coding.engineer’ that highlighted her seriously impressive CV, focusing specifically on her proficiency in coding. The responses to that were predictable. ‘What a waste’. ‘Well printing Hello World these days is considered as coding’. ‘Yeah she can write Hello World’. Scott posted a retort that I can still feel the impact of today:

I have 27481 points on StackOverflow; I’m on the iOS tutorial team for RayWendelich.com; I’m the Lead iOS software engineer for @RallyBound, the 841st fastest growing company in the US according to @incmagazine, I have a Bachelor’s degree from Amherst where I double majored in computer science and theater, and I’m able to live my life doing everything I love. Looking at these comments I wonder why 41% of women in technical careers drop out because of a hostile work environment 🤔 #gofigure

We now have a worthwhile successor to Lyndsey Scott’s beautiful rejoinder. TikToker Zaria, after seeing the sexist bullsh*t being spouted in response to her wearing of a Metallica shirt, posted a response of her own. Asked to ‘name 3 Metallica songs’, Zaria instead shredded the sh*t out of 3 of the thrash band’s most iconic songs, powering through ‘Enter Sandman’, ‘Master of Puppets’, and the finger-melting solo from ‘One’—breezily prefacing that last entry with ‘Someone’s gonna criticise me for not doing leads, so here’s that little fun thing in ‘One’. Here’s Zaria’s mic drop of a response:

Reply to @paytonnsmith I hope this video finds the #Metallica fans lol, not my best #guitar playing but that wasn’t really the point #guitarist

And a few more that came later for good measure:

A little jam on Orion, can y’all go tag Metallica on my IG??? I just got my video on @billboard ##metallica ##guitar ##rock

Reply to @davidgriffith970 too much reverb but u get the point. Comment suggestions and I’ll play for y’all ##guitar ##guitarist ##metallica