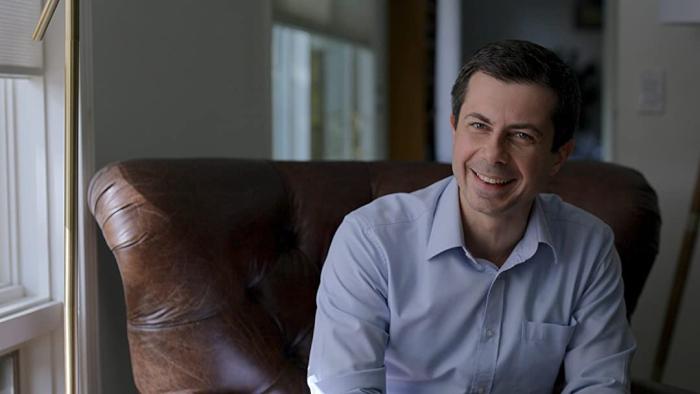 Remember Pete Buttigieg? No, not the Secretary of Transportation incarnation who unfairly gets dragged for taking paternity leave. And no, not the hotshot progressive who entered the race with an eye toward outflanking Bernie on the left, who embraced socialist policies before he rejected them. And no, not the incarnation that ran as hard as he could toward the center in an effort to outflank Biden after Elizabeth Warren usurped his position on the left — the one who couldn’t stop talking about his military service a few months after he couldn’t stop talking about all the languages he spoke. And no, not the Pete Buttigieg that went on Fox News and occasionally made fools of Fox News anchors, either.

I had hoped that the new documentary, Mayor Pete (now on Amazon Prime), might shed some light on the real Pete Buttigieg, but mostly what the doc wants to do is redefine Buttigieg as an inspirational figure for the gay community, a loving husband who overcame his struggles with his sexual identity to make a losing but successful run as one of the nation’s first openly gay presidential candidates. And maybe that’s OK! Maybe that’s all that Pete Buttigieg needed to be in 2020, a guy who help to open the door and fielded all the necessary questions so that maybe the next openly gay presidential candidate might be able to run without their sexual orientation becoming an issue. To be honest, by the end of his campaign, it was barely an issue anymore for Buttigieg, in part because of his inability to connect with people of color or anyone, really, outside of the states of Iowa and New Hampshire.

Mayor Pete, which comes from Jesse Moss, the same director responsible for the spectacular Boys State, is mostly a fluff piece, a behind-the-scenes look at Buttigieg’s campaign. It is not a particularly insightful one. In fact, near the end, I nodded off and woke up only to see Buttigieg ending his campaign. I rewound to see how long I’d been asleep only to discover that it’d only been nine minutes. Mayor Pete spends roughly an hour and 20 minutes on the rise of Buttigieg, peaking with the Iowa caucus, but only nine minutes covering his precipitous fall, much of which is covered in a musical montage.

Mayor Pete nods toward what initially led to his unraveling — his inability to manage the shooting of a Black man by a white police officer in Sound Bend, Ind., the town in which Pete was the mayor — but Buttigieg never really processes or even confronts what was an obvious weakness for him, besides at one point saying that he needed to appear at events that made him look “less white.” Neither does the documentary track Buttigieg’s move from the left to the right, or what were some obviously politically calculated moves that backfired.

Whenever the documentary brushes up against anything touchy or difficult, it seems to fall back on Buttigieg’s sexual orientation, or cut to his more charismatic husband, Chasten, for a pep talk. Buttigieg reminds himself that he just “needs to be authentic” on at least two occasions, but in maybe the only genuinely and honestly raw moment of the entire documentary, Buttigieg also concedes that maybe he can’t “let loose,” and that maybe “this is the genuine me,” and by that, he means the sort of stiff wonk who is great at obliterating others’ hypocrisy but who is neither reflective nor capable of making truly honest connections with anyone besides his husband. I don’t know if Buttigieg would have fared any better in his campaign had he leaned into that persona, but I think he’d have won the respect of more Democrats if he’d remained true to himself and more consistent in his policies.

I’ve seen a number of these campaign docs now — they seem to be great fodder for film festivals — but whether you like Buttigieg or not, Mayor Pete is not one I’d recommend. There’s nothing new here. It’s a collection of talk-show and debate appearances we’ve already seen interspersed with behind-the-scenes moments that the candidate clearly knows are being filmed. At one point, he’s signing bills and singing a song from “Schoolhouse Rock.” It’s carefully curated. There are no epiphanies. No come-to-Jesus moments. No mistakes acknowledged and lessons learned. It’s a facile piece of agitprop about the rise of a political figure that treats his loss as an afterthought because one imagines Buttigieg is not done being a candidate and wouldn’t want to spoil any upcoming races by admitting a weakness or showing some candor. It’s a shame, too, because not only is Mayor Pete a lousy political doc, but I don’t know any more about the man after watching the documentary than I did before I started. But I would absolutely vote for Chasten as mayor of my town.

← Was 'The Great British Baking Show' Semifinal the Most Humanistic TV You'll Watch All Year? | How Did Kirsten Dunst Become So Underrated? →