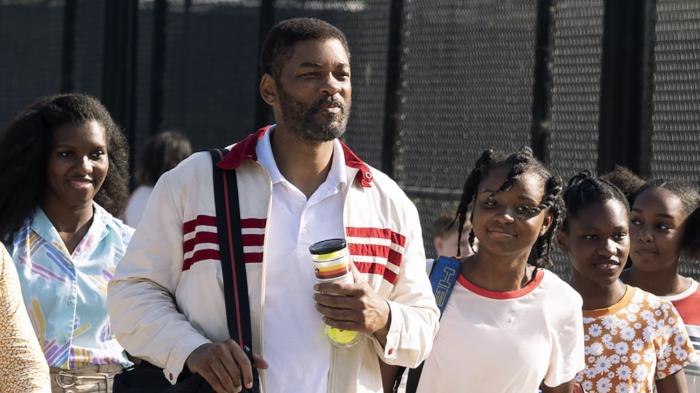 You know, they say that behind every great tennis world champion is … a dad, who is kind of an ass, but only because he wants his children to succeed. It’s interesting that the trailer for King Richard, starring Will Smith as the father of Venus and Serena Williams, is coming out today, the day after Simone Biles took leave of the Olympic Games because of the emotional pressures of being the best, because in King Richard, Will Smith plays Richard Williams, the father who applied all that pressure to succeed on his daughters.

I mean, it worked, and, uh, you can’t argue with the results. Granted, Williams is more than just the hard-ass father here, he was also their hard-ass manager, who did help his daughters break into the sport. Honestly, I don’t know enough about Richard Williams to pass judgment, so thank God that the story about the father of two of the best tennis players of all time is finally being told, because if Hollywood doesn’t tell these men’s stories, who will?

Aunjanue Ellis stars as Oracene “Brandi” Williams, Jon Bernthal as coach Rick Macci, Tony Goldwyn as coach Paul Cohen, and Dylan McDermott as a sports agent. And introducing Saniyya Sidney and Demi Singleton, who star as Venus and Serena Williams, and who deliver inspiring lines like “Yes, Daddy!” (h/t Puchko), “I’m hungry and tired, Daddy. Can we go home now?” and “It was all worth it, Dad, because Will Smith was nominated for an Oscar!”

Directed by Reinaldo Marcus, King Richard will open in theaters and air on HBO Max on November 19th.


← Lucy Liu Addresses the Beef Between Her and Bill Murray on the Set of 'Charlie's Angels' | Chonkerwar: The Great South Pacific, Passive-Aggressive Sea Lion Insurgency →