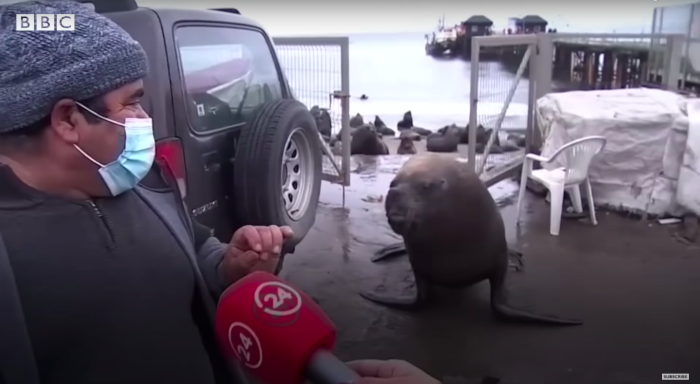 Habitat fragmentation is the unsung villain of the environmental crisis. I could go further into this, but I’m trying to write a lighter article here. Suffice to say, I’m pro “let’s make at least 50% of the Earth a wildlife reserve, and no, we cannot cheat around this with the Sahara and Antarctica.” However, many wild species manage to thrive despite human presence, sometimes because of it. In the case of sea lions and other pinnipeds in Chile, the bloody chonkers have started their very own kind of insurgency: A passive-aggressive-intensity conflict.

Sea lions are a common sight all along our 4,000 kms of coastline, drawn by the number and size of Humboldtian fish. Since they are so uniquely suited to human-dense environments, this results in a perpetual push and pull between excitable tourists, who want to photograph and chuck pieces of fish at them, and the local fisherpeople, who see them as a plague. This squarely falls into the problems caused by habitat fragmentation, despite Chile’s coast having a relatively low population density.

One thing we failed to consider in this discussion is what happens when these animals start going about the place, like an overfamiliar aunty from abroad you have to house for a few weeks.

The video above was shot in Tomé, a lovely small city located some 500 kilometers south of the capital, in a scene not unlike the U.S. North Pacific. As I mentioned before, sea lions are a usual sight in these towns, and they have been strutting around coastal towns like this as if they own them. I mean, sure, they have been around for a little longer, some million years or so before humans. But, would it bother them to act less like Brits or Americans on vacation? Just saying.

Here’s another one stopping traffic in Talcahuano, a much larger city, a few kilometers south of Tomé. Unbothered by the buses, the guy just plops itself, blocking traffic. As the lady speaking in the video says, it seems like it was staging a protest, asking for treats. She might’ve been more correct than she could’ve imagined.

These videos are from five to seven years ago, but recently, sh*t went down. Once again in Tomé, over 300 sea lions took over the place, escaping from a pod of Orcas. The latter were driven closer to the shore than usual, as shifting tides have reduced the number of fish. And would you look at that! The Orcas happened on a tastier treat. As usual, TV crews flocked to the site to interview the community. Most were delighted, except for the exasperated fishermen. That was the moment where the passive-aggressiveness turn into a more active kind. As a fisherman was being interviewed, one sea lion refused to be excluded from the narrative and decided to stick up for its fellow chonkfolk. He literally gatecrashed the scene demanding to have its say.

Look at that face. That’s the face of someone saying, “The f**k you were saying about me? Say I’m a plague, say it to my face!”

Things are getting heated, There seems to be a transition from the passive-aggressive insurgency to a “drunken-hooligan-shouting-come-at-me-bro-aggressive” insurgency. However, it’s not between humans and pinnipeds that we have seen the bigger clashes but between them and Chile’s ultimate Masters of the Land: Street dogs.

Street dogs and developing countries go hand in hand. But Chilean quiltros, (the Mapudungun language noun used here and in Bolivia) are unique in their size and how they become a sort of collective “neighborhood pet,” whether in cities or towns. One of these days I plan to write an essay on Chilean quiltros and the entire culture they embody (aside from the one of irresponsibility towards pets). For now, consider both species as mutual, chonky counterparts.

There are plenty of videos on YouTube of these shouting matches between dogs and their water counterparts, many shot by amused foreign tourists. Only Chileans could capture the essence of this clash of elements, of double layers of hair and fat, of whiskers, paws, and flops.

The most stunning register belongs to these intrepid amateur documentarians, showing one brave little quiltro defending the land from several sea lions at once. Granted, the latter stayed in the water and they both kept at least a meter distance between them. But still, riveting. The video has excellent English subtitles and, if you want to practice your Spanish, it also has subtitles in neutral Spanish … for Spanish speakers outside Chile.

What’s behind this interspecies animosity? Perhaps it’s simple animal territorialism. Perhaps it’s in order to protect us humans. Or perhaps dogs feel threatened down to their ontological being by sea lions’ interstitial, hybrid condition, so similar to them, but so floppy, so free yet so at ease among humans. A mirror to their own evolutionary journey. A mirror that raises questions too disturbing to even ponder.

Will a political solution be needed before things get ugly?

Funny that you mention it, because there is a political connection in all this. I am not talking about public environmental policy or something like that. Turns out that a sea lion was this close to changing the last 16 years of Chilean history.

Of all the Chilean cities where sea lions have planted their flags, nowhere else do they have a bigger presence than in Valdivia, perhaps the prettiest Chilean city. Located by the only proper, navigable estuary in Chile, a colony made their way inland and made use of the waterfront’s infrastructure.

In 2005, then-presidential candidate Sebastián Piñera visited the city on the campaign trail. Campaign trails demand generic pictures against touristic hotspots, so he went to the waterfront and visited the colony. In a demonstration of the impulsive and terrible decision-making that would mark both his presidencies, he approached a male sea lion chilling by a rail guard. Guess what happened next?

Now why would Getty not store the images of this?

A sea lion came within centimeters of eating one of the most prominent political figures in Chile over the last three decades. He refers to it as a “funny anecdote”:

Can you fathom a weirder divergence point for an alternate history? Now, he had no chance of winning during that election, but since that time, he finished consolidating his power as the main right-wing figure. After that, he was elected. Twice. F**king up so thoroughly that it led to this and this and this.

Were sea lions trying to send a message in the way any insurgency is, at first, a symptom of a real malaise? Are Chilean quiltros acting as an unthinking, oppressive law enforcement against what perhaps is a new, radical, environmentalist political movement? Should we have known better than to vote for a guy who can’t even respect the personal space of an absolute unit of a carnivore?

← 'King Richard' Trailer: Finally, the Inspiring True Story of Venus and Serena Williams' ... Dad | Who's Running Britney Spears's Instagram Account and Why Does That Have Us So Concerned? →