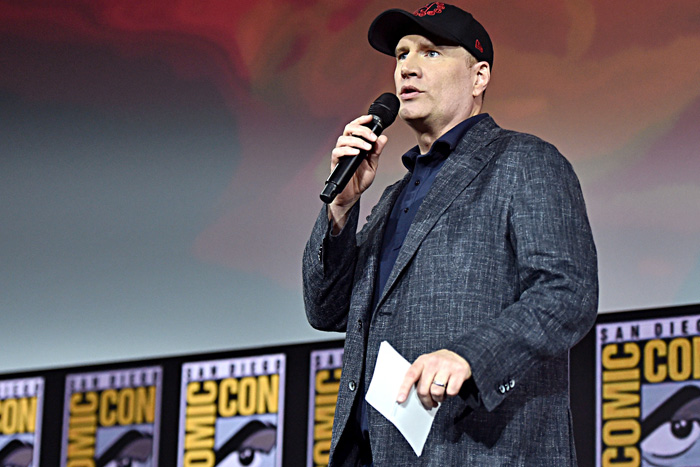 Kevin Feige Almost Quit Marvel Over Lack of Representation, So, Uh, Where Is It?

Because all of you obviously take diligent notes while reading my columns — Quick, who’s the father of Meghan McCain? Dick Cheney, that’s right! — then you already know how former Marvel Comics CEO and Trump stooge Ike Perlmutter was a goddamn stick in the mud during the early days of the Marvel Cinematic Universe. There’s a reason the massive franchise was a pure white sausage fest, and it’s because Perlmutter gets the gout from woman and ethnics.

OK, that’s not entirely true, but he sure doesn’t like them in his superhero movies.

As the legend goes, after Ava DuVernay walked from the chance to direct Black Panther, Kevin Feige went over Perlmutter’s head and reorganized Marvel Studios so that it now answered to Disney CCO Alan Horn. It also didn’t help Perlmutter’s case that he almost ran Robert Downey Jr. out of the Marvel movies by being a notorious cheap-ass. With the cranky ass comics CEO out of the picture, the Marvel movies were able to finally join the modern world by not making every character a white guy played by actors named Chris.

But in a new interview with Mark Ruffalo, Feige’s battles with Perlmutter stretched all the way back to the first Avengers film, and the MCU almost died right there on the table. From The Independent:

I mention how Marvel has been criticised in the past for its lack of LGBT+ representation. He begins to tell a story. “When we did the first Avengers, [Marvel supremo] Kevin Feige told me, ‘Listen, I might not be here tomorrow.’” He was going to talk to Disney about the issue of why there were no female superhero movies, which they had been discussing while preparing for Thor: Ragnarok. “And he’s like, ‘Ike [Isaac Perlmutter, Disney’s largest shareholder at the time] does not believe that anyone will go to a female-starring superhero movie. So if I am still here tomorrow, you will know that I won that battle.’”

That, says Ruffalo, was the turning point for Marvel. “Because Kevin wanted black superheroes, women superheroes, LGBT superheroes,” he explains. “He changed the whole Marvel universe. We now have a gay superhero on the way, we have black superheroes, we have female superheroes - Scarlett Johansson has her movie coming out, we have Captain Marvel, they are doing She-Hulk next. No other studio is being that inclusive on that level.” He smiles. “They have to, though. This is the f***ing world.”

So, here’s the thing. Ruffalo is correct that with Perlmutter out of the picture, Marvel Phase 3 featured very noticeable leaps forward in representation with Tessa Thompson’s Valkyrie in Thor: Ragnarok followed shortly by Black Panther and Captain Marvel. And, yes, Phase 4 is upping the ante even further with *supposedly* increased LGBT representation in Thor: Love and Thunder and The Eternals.

I emphasize supposedly because Ruffalo’s getting a little ahead of himself in singing Marvel’s praises. Despite increased talks of representation, the studio notoriously bailed on making Valkyrie explicitly bisexual in Ragnarok, trumpeted an “openly gay” moment in Endgame that was some bullshit, and Feige has himself already walked back a promise of trans character in the MCU.

Granted, yes, the MCU now has exactly two female superhero leads and will have exactly two black superhero leads once Blade arrives in 2022 — I paused after seeing those dismal facts in writing, too — don’t let Marvel get away with touting LGBT representation until you actually see it on the screen. Hopefully, for more than a second. And, look, I get it. We all love Mark Ruffalo and his activism, but never forget, part of his job is to be a hype man for the biggest film franchise on the planet.

← Rush Limbaugh Thinks He's an Expert on the Coronavirus Now | Where's That 'Zoey's Extraordinary Playlist' Cast Member From (And Other Questions Answered)! →