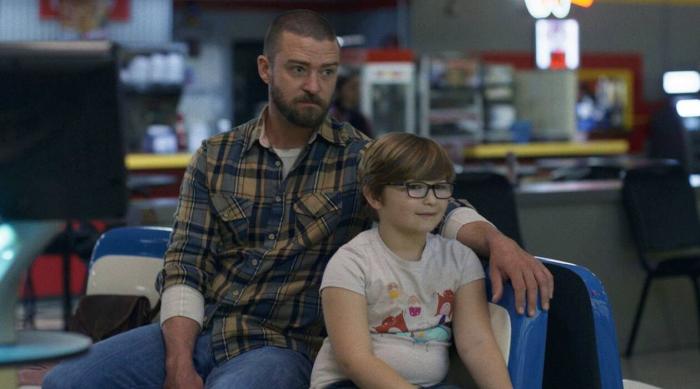 Now on Apple TV+: Beardy McBeardlake Brings a Big Heart to a Small-Town Story in 'Palmer'

Palmer follows the now-familiar The Visitor formula, whereby a lonely person’s life is upended by a stranger, usually a kid. Here, Justin Timberlake plays a former college football star, Eddie Palmer, who returns to his small, Southern hometown after a 12-year bid in prison for attempted murder. He moves back in with his grandmother (June Squibb), who helped raise him, only to discover his grandmother also allows Shelley (Juno Temple) to keep her trailer on her property. Palmer’s grandmother also frequently babysits Shelley’s eight-year-old son Sam (Ryder Allen) when the drug-addicted Shelley disappears, often for days or weeks at a time.

Sam is gender fluid — he likes to play with dolls, he likes to dress as fairy princesses, and he likes to try on lipstick — and as one might imagine, it doesn’t go over well in a small Southern town where high-school football is the primary topic of conversation. The reserved Palmer, straight out of prison, is initially cool to Sam, as well, but after his grandmother dies and Palmer and Sam are forced to spend time alone together, they forge a strong father-and-child bond over their common identity as outsiders. Palmer finds a job as a janitor at the local school, which allows him to keep an eye on Sam, and he also develops romantic feelings for a teacher, Maggie (Alisha Wainwright).

There’s not a single moment in Palmer that can’t be predicted from the trailer. It’s a formula we’ve seen dozens of times, and except for introducing an eight-year-old gender-fluid character into the proceedings, there’s not an original moment in Cheryl Guerriero’s paint-by-numbers screenplay. It is also shamelessly sentimental, a movie that is just begging for you to bring a box of tissues.

But it is also surprisingly affecting. Just because we can see all the puppet strings doesn’t mean it’s not effective in pulling at our emotions, and as reluctant as I am to admit it, Justin Timberlake is very good in this. I am not otherwise a big fan, but Beardy McTimberlake pulls off the brooding loner Palmer is meant to be at the film’s outset, while charming, charismatic electric-wavy Timberlake makes the relationship between him and Ryder Allen’s character work in the back half. The two have spectacular chemistry together, and Ryder Allen is a goddamn treasure. There’s nothing particularly precocious about him; he’s a seven-year-old who acts like a seven-year-old, and there’s something refreshing about that.

It’s not an especially challenging movie, and while its familiarity might otherwise be a big strike against it, there’s also comfort in it, particularly now when comfort is often hard to come by. It’s not a film that is going to move mountains, although it might help mold some small-town minds. Ultimately, it is a wildly predictable movie, but it has a huge heart, and I’m not feeling cynical enough to knock it off its sleeve.


← Review: 'Derek DelGaudio's In & Of Itself' Is Riveting Rubbish | Review: Swedish Thriller 'Knocking' Is An Aronofsky-Like Knockout →