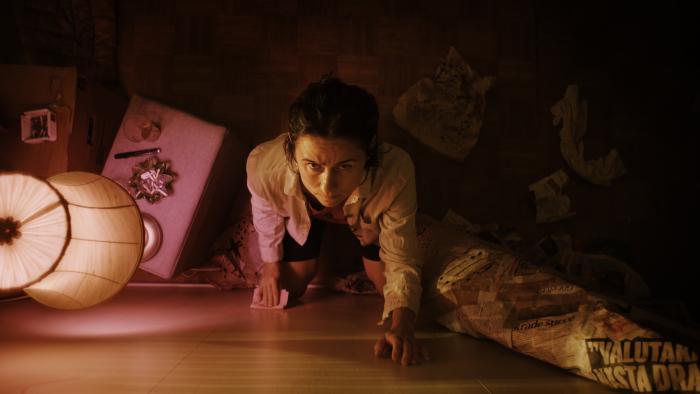 It’s late. You should be asleep. But your mind won’t shut down. Your eyes are locked on the mid-distance beyond your ceiling, a blank canvas that begs to be filled with a flood of thoughts, concerns, and dark spirals into late-night anxiety. Then, shattering through this cruel wall of silent distress comes a sound. A knock. There it is again. It’s coming not from your front door or even your window. It’s coming from above you, from the ceiling. Someone is calling out or asking to come in. This unsettling situation is at the center of the sensationally surreal Swedish thriller Knocking.

Directed by Frida Kempff, Knocking follows a fragile woman named Molly (Cecilia Milocco), who has experienced a psychologically scarring tragedy and is finally being released from an asylum. She’s trying to get back into the swing of things by moving into a new apartment, meeting the neighbors, maybe gussying up the place with a houseplant. Then comes the knocking. Despite her unease, she doesn’t immediately give in to intrusive thoughts or worst-case scenarios. Gently investigating, she asks the stern old man who lives upstairs if he’s—by chance—knocking on his floor. He insists he is not. The knocking does not stop. And soon, it is accompanied by a tremulous feminine whimpering, then screams.

Molly becomes obsessed with uncovering the mystery behind these desperate sounds. She spies on her neighbors, questions her super, and repeatedly begs the police for assistance. They call her crazy, hysterical, irrational, forcing Molly to question if what she’s hearing is real…or perhaps the ghosts of the past haunting her present.

Screenwriter Emma Broström translates Johan Theorin’s novel into an intimate thriller that not only bonds us to Molly but also ushers us into her perspective. We hear the knocking too. We share in her outrage as those around her dismiss her concerns. We understand the ache that lies in her heart, the need to be a savior. We are her witness as she researches Morse Code and tries to make sense of a snarl of delusions, gaslighting, and potential paranoia.

Through surreal visuals, Kempff further submerges audiences into Molly’s state of mind. Dripping blood and hissing critters become the backing band to the damnable knocking. Flashbacks to a time before burst with vibrant colors. In Molly’s present, her world is painted in sleepy reds, sickly greens, and sordid yellows. Hues of rot bleed into an atmosphere thick with suspense and uncertainty. A crawling pace reflects the agony of insomnia-ridden nights. Then, when Molly leaps into action, the cinematography employs Snorricam to reflect her frenzy. The camera centers her fretting face steadily in the frame as she barges into a neighbor’s home. Meanwhile, the setting behind her rocks wildly, presenting clearly how Molly feels her world is working to throw her off balance and into the abyss of her darkest fears.

In the atmosphere, intimacy, and style, Knocking feels like a Darren Aronofsky film, offering a heady dose of obsession, insanity, and dangerous vulnerability. All the artistry of Broström and Kempff would be for naught if it weren’t for the incredible performance of Milocco. Light on grisly spectacle, Knocking relies on Milocco to spin a sense of dread through the whole of its runtime, whether she’s primly confronting her neighbors, pleading for help, or staring into the abyss of uncertainty cracked wide by that knock knock knock. Hers is not the face of the ethereal ingenue common to horror and Aronofsky idolatry. She is an older woman, whose face has earned character with decades of broad smiles and furrowed brows. Her suffering is not regarded as sickening splendor, ready for an arty poster. It is unapologetically aching and raw. As such, a raised eyebrow sings of hope, while a tense frown strikes like a scream.

All together, these three women make Knocking a knockout. Methodically paced and keenly tense, this thriller draws you in with the openness of Milocco’s visage, then hooks you with its titular inciting incident. From there, Kempff and Broström spin a tale, spooky yet harrowingly familiar. Banging on doors, begging to be heard, Molly represents so many whose voices might make the world uncomfortable, and so are ignored or silenced. But Molly won’t accept just being ignored. From her righteous indignation comes a finale that is suspenseful, strange, deceptively simple, and ultimately satisfying.

In short, seek out Knocking.

Knocking is part of Sundance 2021’s Midnight slate. For more on the festival and how you can enjoy it from home, check their website.

← Justin Timberlake Brings a Big Heart to a Small-Town Story in 'Palmer' | Review: 'The Night' is Horror in the Key of Poe, Kubrick, and Gogol →