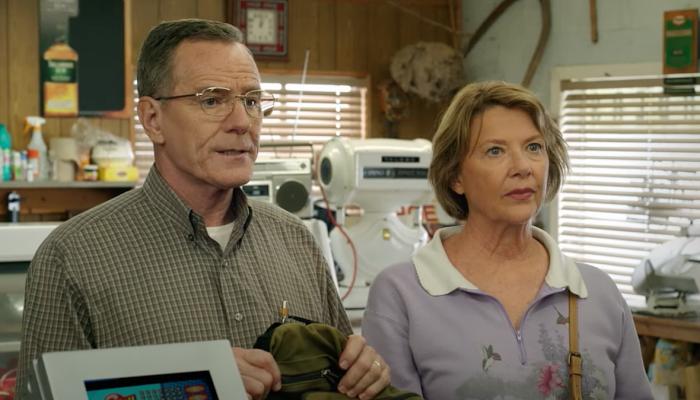 'Jerry and Marge Go Large' Is a Whole Lotto Boring

Jerry and Marge Go Large is blessedly only an hour-and-36 minutes long, but it’s been a long time since a movie so short has felt so interminable. From director David Frankel (Marley & Me, Hope Springs), the film (now streaming on Paramount+) is — by the director’s own admission — geared at older audiences, but it almost feels like an insult to expect grandparents to eat bland applesauce when another network is still providing shredded red meat.

Jerry and Marge Go Large is based on a true story, proving that not all true stories are worthy of the feature film treatment. It’s about a retired accountant who discovers a flaw in a particular Winfall lottery that more or less guarantees payouts bigger than the investment, so long as lottery tickets are bought en masse. The more lottery tickets one buys, the bigger the payout (in real life, Jerry and Marge earned $26 million from the Winfall lottery between 2003 and 2012). After Jerry doubles his money in his first attempt (after buying 8,000 lottery tickets), he decides to bring in the entire community of his small town, Evart, Michigan, to start a “corporation,” and pay out money to “investors” who use much of the money to help rebuild their dying town and bring it back to life.

It’s a compelling premise, and fun to imagine what one might do if they discovered a full-proof flaw in the system. Unfortunately, the act of driving to Massachusetts to buy thousands and thousands of lottery tickets and pore over them after each lottery drawing doesn’t make for great drama, and none of the bland Capra-esque flourishes can change that. There are some obvious Hollywood attempts to provide the story with quirky characters (Rainn Wilson plays a convenience store clerk who partners with Jerry and Marge by letting him use his lotto machine), some conflict (the “villain” is an entitled Harvard student who figures out the same flaw), and some emotional resonance (counting lottery tickets with his family members helps a detached Jerry bond with his kids), but none of it adds much by way of drama.

Jerry and Marge Go Large very much feels like a movie that Frankel and screenwriter Brad Copeland (working from Jason Faggone’s HuffPo article) think that older people will like: It’s genial, there’s minimal conflict, no threat of prison time or violence, and there’s a happy ending for the married couple who can afford to put their grandkids through college. Maybe it’ll play well in nursing homes across America, but it also feels a little patronizing, like they’re afraid a small dose of excitement might give their target audience heart palpitations. Even the Hallmark Channel is like, “The movie is not supposed to put your audience to sleep! That’s what nonbenzodiazepines are for!”

It’s also a colossal waste of the talents of Cranston, Bening, Rainn Wilson, Larry Wilmore (the family’s accountant), Jake McDormand and Anna Camp (who play Jerry and Marge’s adult kids), and even Michael McKean, who plays a doofus townsperson with about 90 seconds of screentime. It’s way too soon to put some of these actors out to pasture, and Jerry and Marge feels exactly like an attempt to do so.

Indeed, after the original HuffPo article came out about Jerry and Marge, there was a bidding war for the rights to their story, but it’s clear that no one thought through how painfully boring it might be to watch Bryan Cranston and Annette Bening count lottery tickets for an hour-and-a-half. No one here is even trying to evade authorities — Jerry at one point, in fact, informs the lottery commission of his intentions and they shrug him off. He not only discovers the flaw in the system but he’s given permission to exploit it. That’s a great real-life twist, but it’s a death knell for a movie trying to maintain the audience’s attention.

Jerry and Marge Go Large is streaming on Paramount+