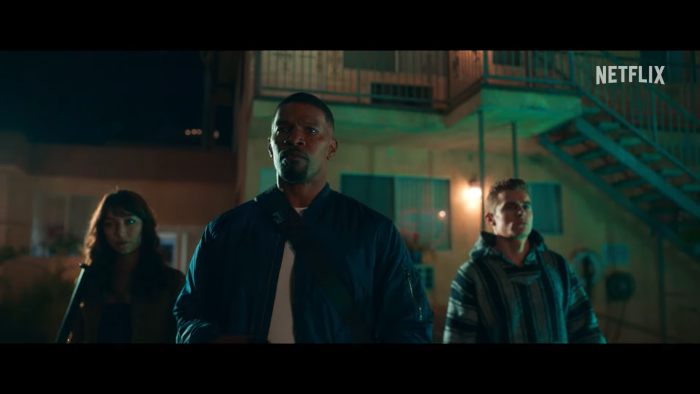 There is something inherently enthralling about a protagonist being hard up for money. Maybe because it is so relatable? If you’ve never had money issues, more power to ya. That sounds like a great way to live! But the idea of doing whatever you can to make ends meet certainly resonates with me, I’ll tell you that much. That’s why I was pleasantly surprised to find that conflict at the heart of the new trailer for Day Shift.

In Day Shift, Jamie Foxx plays a vampire hunter in a world where such a profession can get you paid. Gone are the days of Abraham Van Helsing, Buffy Anne Summers, and Eric Cross Brooks, better known as Blade, seeking purely to eliminate evil. Here, we have Foxx battling the undead for that almighty dollar. Specifically, he’s trying to make enough money slaying vamps so his wife and daughter don’t move to Florida. Tale as old as time.

Foxx poses as a pool cleaner so he can dust these bloodsuckers, but freelance only gets you so far. In this world, the best way to make money vampire hunting is by joining a union. Not only does this action-led vampire hunter flick focus on fiscal responsibility but it’s also union strong! This means Elon Musk will hate it, so it’s already aces in my book.

An interesting wrinkle to this film is that it is the directorial debut of actor, stunt performer, and stunt coordinator J.J. Perry. Perry has an extensive career, but here they are leading with his work on John Wick. The movie certainly has a Wick feel, with the trailer featuring some gnarly-looking fight scenes. It takes a lot to challenge Wesley Snipes falling into a pool of blood only to emerge and eviscerate a gang of vampires dressed like S.W.A.T. Team members, but Day Shift seems like they’ll certainly try!

I’m pretty excited for this over-the-top action/horror movie. It feels perfect for summer! I’m also a sucker (nailed it) for hip-hop stars in horror movies, and Day Shift boasts Snoop Dogg as a co-star. At one point in the trailer, he brandishes a large Gatling gun and opens fire on a pack of vampires! Does that take us even further from the relatability of a man trying to provide for his daughter? Sure, but that’s how they get ya!

Vampire hunting is his business — and business is booming.

← Nation Prefers Biden to Trump, but Dems Overwhelmingly Prefer to Move On from Joe | Jameela Jamil Knows Her 'She-Hulk' Character Photo Is Not Great →