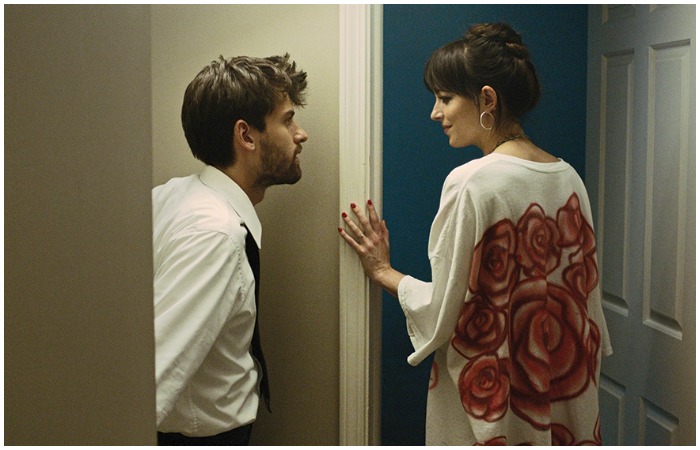 In 'Cha Cha Real Smooth,' the Actor/Writer/Director Can't Stop Obsessing Over Himself

Charm is a hell of a thing. Those who naturally possess it can elicit smiles from all kinds of people, turning any instance into an opportunity to look up from under a brow and generate warmth. In the right hands, you can end up with gaggles of social media users gathering around a three-second clip of Jon Bernthal saying, “you can call me whatever you want” to an entertainment reporter. In the wrong hands, charm can go down like a ladle full of bleached white sugar. Anyway, so there’s a movie on Apple TV+ called Cha Cha Real Smooth.

Cooper Raiff (who also wrote and directed) stars as Andrew, the hero of this slice-of-life story. Andrew is the portrait of youth at a crossroads, a recent graduate stuck in a “bad job,” trying to find focus for the next stage of his life. He’s pining over an uninterested woman who’s left for Barcelona, spending his days at a food court gig sending her a string of carefully crafted texts. In his off-hours, he razzes his brother and stepfather over dinner, chaperoning the former to the odd bar or bat mitzvah.

At one such affair, his charisma lands him in possession of the microphone and the attention of the crowd, and he’s soon latched onto by the moms as the next great thing in teen entertainment; the party starter for these coming-of-age events. Still in a state of arrested development, Andrew dances to the “Cha Cha Slide” for small crowds while “nice guy“-ing his way into the heart of one of the mothers, Domino (Dakota Johnson giving another of her quiet and subdued performances like the one that rightfully got her buzz for The Lost Daughter).

Domino isn’t just a manic pixie dream girl, nah, she’s an impossibly beautiful damsel in distress, and this aimless twenty-something fancies himself just the knight she needs. Because, of course, Domino isn’t just the gorgeous, fun, smart, magnetic woman of everyone’s dreams; she’s suffered all kinds of womanly problems like a miscarriage, a rich and hot fiancé she doesn’t really like, and an autistic daughter whom she needs to supervise lest she be bullied by the other kids. But Andrew is here to save the day as the compassionate guy who isn’t grossed out by the blood dripping down her legs and who is willing to babysit Lola (Vanessa Burghardt) so Domino can socialize (and, of course, return home in time to flirt with him). What follows is a sticky sweet tale of confused love and friendship that follows Andrew flowing through the lives of the women around him and shaping the young men who’ll later walk in his shoes.

There are elements of this romp that are charming and promising enough to align it with its stronger cohorts. It’s near impossible to avoid comparing it to Licorice Pizza, another recent tale of impractical love and confused young friendship, or even the works of Richard Linklater. But by writing and directing himself, Raiff’s sincerity reads as a nauseating, him trying to capitalize off his own natural charm. It’s the centering of his lead that washes away a lot of the authenticity of the story and makes it feel less like a messy and gorgeous slice of life and more like the fantasy of the nice kid from down the street. There’s a fathomable version of the same story where a frustrated woman struggles to find support in all the wrong places when her fiancé neglects her in favor of his work, but this is thwarted by the over-centering of Andrew in the story as the gentle hero. In fact, Andrew is surrounded by meatier stories like a half-baked anecdote about his repressed mother’s mental health issues, his younger brother’s struggles with manhood, and the inferiority complex of the subject of his tryst. Andrew grazes through all of them with a charming piece of dialogue and a pat on the head that centers him in each of these moments.

But on authenticity, Raiff captures the experience of that year of bar mitzvahs. Every little detail from the outfits to the bathroom conversations about first kisses to the swarms of moms kvelling over the magnetism of your coordinated dance moves felt so completely genuine that I clutched my heart for the memories. The best bit of the whole feature is an opening moment where a young bar mitzvah boy falls for the entertainment, a woman whose job it is to pump up the crowd with her dance moves and charisma. The former teen within me who still pines for my bat mitzvah DJ felt that (look, he sang the boy part to “Oops, I did it Again” with me, I’m just saying, there was SOMETHING there). All this to say, the cultural bits in Cha Cha Real Smooth were refreshing and brought a nice sense of levity, and also functioned as a perfect backdrop to raise up the fathomability of these characters crossing paths. Este Haim worked on the music, along with Christopher Stracey, which contributed to the “vibes” that held this story together.

Cooper Raiff has a few of the makings of a romantic filmmaker but Cha Cha Real Smooth isn’t going to be the piece of evidence to convince me he is the next generation of Linklater or Baumbach. In his hands, the camera dances around a lot of beautiful moments like inquisitive youth, women on the edge, and blossoming friendships, but it never focuses enough on those things because Raiff is too caught up pointing the camera at himself.

← Kill Your Television: 'Poltergeist' Turns 40 | You're Allowed to Be Upset About Marilyn Monroe's Dress →