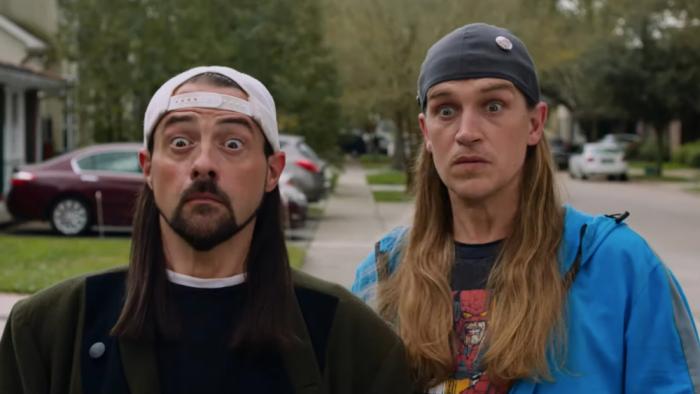 How the Hell Can We Watch Kevin Smith's 'Jay & Silent Bob Reboot'?

As the resident Kevin Smith fan here on Pajiba, TK graciously assigned the Jay & Silent Bob Reboot review to me this month, though I have otherwise mostly taken myself out of the film review rotation. Notwithstanding, uh, Tusk and Yoga Hosers, I was pretty excited to see Jay & Silent Bob Reboot, if only because it would provide me with an opportunity to revisit some old friends. I grew up on the View Askew Universe, and I know that some of Kevin Smith’s old regulars — Joey Lauren Adams, Matt Damon, Ben Affleck, Jason Lee, Rosario Dawson — would be returning for cameos, along with the likes of Chris Hemsworth, Joe Manganiello, Deidrich Bader, and Keith f**king Coogan.

Was I expecting greatness? Maybe not (although, reviews have been generally positive!). Was I expecting an enjoyable two hours with a few laughs and/or maybe the opportunity bitch about a Kevin Smith movie again, because we’re hardest on the ones we love? Absolutely!

As the release date approached, however, I checked my local movie listings and could not find any showtimes. Bummer. I am not a regular listener of Smith’s podcasts anymore — although I do enjoy seeing him on late-night shows, The Talking Dead, and even Fred Savage’s fake after-show — because I am a busy person who doesn’t have a lot of time to devote to Smith’s weed-fueled ramblings (not that I wouldn’t enjoy it). As such, I haven’t heard much about the release of Jay & Silent Bob Reboot beyond a date and a trailer.

My immediate thought was, “Huh. Maybe it’s getting a token release in four theaters and will show up on digital platforms in a couple of weeks.” But when I wrote the box office over the weekend for Uproxx, I saw Jay & Silent Bob Reboot at number 27, earning a mere $93,000, which isn’t great. Then again, it only screened in one theater, and $93,000 is amazing for one theater. I also saw that it had already earned over $1 million at the box office, and yet I had no idea how, since it had not been released here.

As it turns out, Jay & Silent Bob Reboot screened last Tuesday and Thursday as part of Fathom Events, “an entertainment content provider that broadcasts entertainment events in movie theaters throughout the US.” Fathom allows us to go see the opera in our movie theaters, or what the premiere of Doctor Who or The Walking Dead, or a concert, or a Studio Ghibli movie. The thing is, Fathom Events are not heavily promoted, at least in my neck of the woods, beyond the occasional mention before the trailers of another movie.

So, it came last Tuesday and Thursday, and if you missed it, well, you might be shit out of luck. There will be no more regular screenings of Jay & Silent Bob Reboot in your local theaters. However, Kevin Smith and Jason Mewes are touring with the movie. They’re taking it from town to town, doing local press for the film, and screening it with Smith in attendance. They kicked off the tour this week in New Jersey, and Smith will be taking it to over 60 cities, through February of next year.

At the @musicboxtheatre in CHICAGO for the 2nd stop on the #RebootRoadshow Tour! This is how the Windy City greeted #JayAndSilentBobReboot! Wanna get in on the fun? Get your tickets at https://t.co/LU79HZC1Ql! DETROIT and GRAND RAPIDS are next! pic.twitter.com/lPjxdXq3V0

Believe it or not, many (if not most) of the shows are already sold out. Fortunately, he is coming through my town late in the run — February 6th, 2020 — and it hasn’t sold out yet. I don’t know how much tickets are in other venues, but I just paid $60 for two tickets to see a goddamn Kevin Smith movie, so I guess the Jay & Silent Bob Reboot release strategy is working. After all, it’s already made $1 million, it only cost $10 million to make, and if he’s selling tickets from $25 to $200 a pop in over 60 cities, most or all of which are selling out, well, it sure looks like he’ll see a tidy profit, which all but assures that Kevin Smith will get to make Clerk 3 or Dogma 2 or whatever sequel that Kevin wants to make next.

Good for him, and check back in this space in February 2020 for a review. Tickets are available here, by the way.

← This 'NYTimes' Piece on 'Anxious Democrats' Is Malarkey | Review: 'The Laundromat' is a Rare Misstep for Steven Soderbergh →