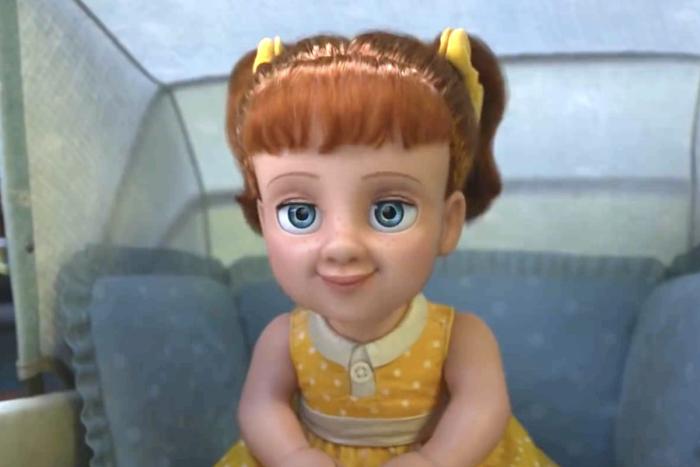 I am sick to death of sequels, prequels, remakes, reboots, and reborquels, as franchise fatigue has firmly settled in at the summer box office, so much so that I’m going tonight to see both Stuber and The Crawl, not so much because I’m that interested in either, but because they’re original films. One exception to that rule (besides John Wick 3) has been Toy Story 4, which successfully combatted franchise fatigue by introducing a number of horror tropes to a kids film. It is fantastic and creepy and funny.

Of course, One Million Moms is objecting to it, calling for a boycott that will have zero impact on the $662 million gross it’s already put up at the box office worldwide. And what is it, exactly, that One Million Moms objects to? The chilling new character, Forky, who repeatedly tries to throw himself in the trash? Or is it Gabby Gabby, the creepy doll who literally attempts to steal Woody’s voice? Or how about these guys, who look like they escaped from a Blumhouse film.

It’s a horror show! And yet, One Million Moms takes no objection to the horror elements of the film. They’re upset over the real terror: Lesbians!

Wait? There was a lesbian couple in Toy Story 4? I didn’t even catch that, but apparently, that was part of Pixar’s AGENDA. From Newsweek:

“The scene is subtle in order … to desensitize children,” One Million Moms wrote in a statement on its website. “But it is obvious that the child has two mothers, and they are parenting together.”

The group called the scene “dangerous” and warns that parents may be “blindsided” by the “subtle but obvious promotion of the LGBTQ lifestyle.”

“It has not been mentioned much in mainstream media, which could appear as acceptance when really it was because it happened so fast,” the petition adds. “But the scene was included and intentionally not announced prior to the movie release in hopes it would be kept quiet to expose as many children as possible.”

It also balked at a line in the film about not hiding in a closet. “Some children may not catch this reference, but it was extremely unnecessary.”

OH MY GOD, there are two women in the film who can briefly be seen showing affection for one another and their child? THE HORROR. What will this insidious studio push next? Men, holding hands, while lovingly scruffing their son’s hair? Pixar has gone too far. An animated film is no place for endearing loving families and this will not stand. Also, why is it One Million Moms? Are they bigoted against fathers? Or is this some massive lesbian cabal? Maybe we should be boycotting One Million Moms, too! You can’t put one million moms in the same room without expecting shenanigans. My wife went to Smith, and I’ve heard stories. Dangerous stories. About love, and solidarity, and finding yourself. It’s unconscionable! We must separate these moms before it’s too late!