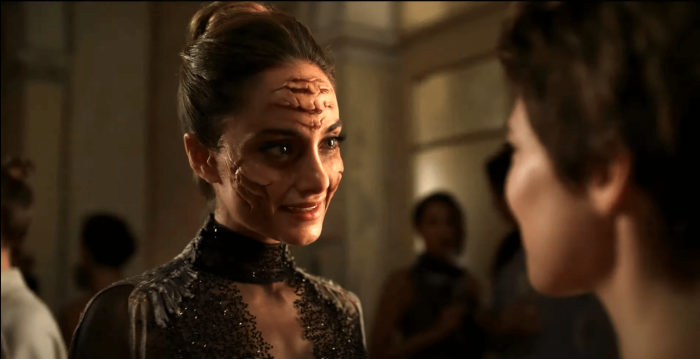 For 'Crimes of the Future,' Cronenberg Dusts Off his Old Self to Reflect on His New, Older Self

Warning, the below contains spoilers for ‘Crimes of the Future’

David Cronenberg has a varied filmography, stretching from historical reflections, to action features, to crime dramas. Though he’s found colossal success with all sorts of cinematic events, he is most associated with body horror. And though his name usually evokes conversations about technological devices that look more like Xenomorphs and vaginas, what the auteur is really known for is the way he uses science fiction, horror, and the body, to create meditations on technology and humanity. Videodrome (1983) wasn’t just about oozing televisions, but about “a fascination and horror of sex and violence, and the boundaries of reality and consciousness.” eXistenZ wasn’t just about a video game that uses fleshy-looking “game pods,” it was an exploration of technology and evolution, as told through forced phony social interactions and a flawed revolution. Returning to form, Cronenberg is now a different director than he was when he put down the flesh-covered pen in the late 1990s. For his latest, Crimes of the Future, David Cronenberg has crafted a story about the old guard contending with belonging amongst the rebellion.

In Crimes of the Future, Viggo Mortenson (an actor who has worked with Cronenberg on films outside this realm), plays Saul Tenser, an aging man in a world where pain and infection are almost extinct. Tenser’s body has been slowly betraying him, causing him to feel pain, spontaneously grow new organs, and to have difficulty ingesting and digesting food. Tenser has parlayed this strange ability to spawn new organs into fodder for grotesque performance art, finding himself amongst the underground glitterati, snugly on stage before hip progressive types who wear designer pleated pants. But Tenser isn’t just the canvas for his performance art partner’s beautiful surgeries, he’s also an undercover officer working to assist in bringing down the rebellion.

What appears to be a bloody and morose story of the world turning to public surgeries for sexual pleasure is also a reflection by a member of the old guard on progress. Cronenberg is using plastics and crumbling backdrops to have a conversation about progressive climate activists being squashed by the state, and to consider where an older man fits within that equation. At one of his shows, Tenser is approached by a member of an underground group of “plastic eaters,” who asks him to perform a public autopsy on his son’s corpse. The plastic eaters have performed surgeries on themselves to create new organ pathways that allow them to consume, digest, and live off of plastics, and this man’s son was the first born with the ability to do so without any surgical modification. Hoping to show this to the world, avoiding the cover-ups of law enforcement, he’s desperate for Tenser to put his son’s corpse on display. Struggling to balance his position between worlds, Tenser has to decide his next steps.

Of course, plastic eating and an underground rebellion scream that they’re a metaphor for progressives by way of environmental activism. Nary a month passes without an article entitled “You’re Eating Microplastics,” with a subtitle explaining how they’re killing us. For every one of those pieces, there are even more about climate change denial, politicians ignoring core issues, and culpable corporations turning their eyes to paper straws. Young activists become social media icons, performing their activism for celebrities as a means of getting the world to take notice. Crimes of the Future’s crumbling setting represents a deteriorating planet, and the plastic eaters stand in for a rebellion wishing to perform for the “liberal elites,” to throw negative attention at the suppressive government.

Caught within this melee is Tenser. Tenser, like the leads of Bladerunner and Equilibrium before him, is an incidental oppressor who realizes he belongs with the rebels. He’s the portrait of the ruling class, whose struggles present themselves as a parts of aging out of relevance. But the further he dives into the fray, the more Tenser sympathizes with those he’s quieting. It’s no coincidence that Cronenberg’s film’s final moments have Tenser conceding, at the hands of his none-the-wiser partner, that he consumes plastic.

Cronenberg, himself, is in his late seventies. One of his earliest features was Crimes of the Future (1970), a story about a cosmetic that’s eradicated sexually mature women. In this story, men contend with a women-less world going so far as to grow new organs and remove them to parody childbirth. Cronenberg then held on to the title, considering it for eXistenZ. Then, after contemplating retirement, Cronenberg was encouraged by producer, Robert Lanton, to dust of this screenplay (called “Painkillers”) which he wrote around 1998. According to him, he didn’t change a word of the more-than-twenty-year old script, purposing it to be evergreen, taking place in an alternate universe and tackling ever present themes. And while that’s perhaps true, it’s easy to imagine the aging director crafting a protagonist who is contending with an aging body and thoughts about allegiance with the young.

In returning to his roots, David Cronenberg has given his adoring fans more of what they want: bizarre bio-technological nightmares that wink at sexuality by way of the grotesque. But each time the filmmaker has given us one of these features, he’s explored deeper philosophical ideas about technology and life in an ever-changing world. Though using his own old script, insisting nothing has changed, this newest feature feels like the reflections of a man who spent his life challenging biological and technological evolution, and is doing so again from the perspective of an aging member of an earlier wave.

‘Crimes of the Future’ is now available on all the usual digital platforms.


← Netflix Continues Its Weightless, Drab Assault on Cinema in 'Spiderhead' | 'The Old Man,' Like a Geriatric Urine Stream, Is a Satisfying Slow Burn →