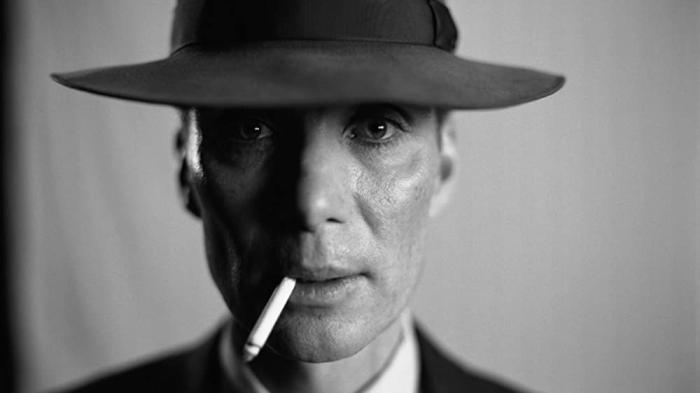 Christopher Nolan Has Gifted Us with an 'Oppenheimer' Poster

It’s fair to say that Oppenheimer, Christopher Nolan’s historical drama about the man who helped to create the atom bomb, is one of 2023’s most anticipated films. Nolan’s work is always hotly hyped and this one includes a starry cast of seemingly every white man in Hollywood. As with many Nolan projects, details of what to expect have been kept hidden. Granted, this one’s biographical so it’s not as though we need spoilers on whether or not the bomb successfully destroyed Hiroshima, but there are still many elements we’re keen to hear more about. Well, now we’re getting teeny tiny hints of what’s to come.

Reports indicate that the first teaser trailers for Oppenheimer will play before Jordan Peele’s Nope, which opens in theaters this week. And now, we have a poster!

#Oppenheimer - Only in theaters 7 21 23 pic.twitter.com/olB1RLnNZl

It’s certainly eye-catching. I appreciate Cillian Murphy’s ‘this is fine’ energy as he stands amid the chaos with that impeccable hat. Nolan really is one of the few directors working today (not including the endless IP wagons) who can incite online fervor with a mere poster. This is a major undertaking for him, given the history, politics, and still deeply relevant issues at play in the story of J. Robert Oppenheimer. This is a man who does spectacle like nobody else but he’s also great in quieter character moments (there’s a reason The Prestige is still one of his best films.)

Nolan’s not coasting either, not with that cast, Ludwig Göransson on score duties, and Hoyte Van Hoytema as cinematographer. The book it’s based on, American Prometheus: The Triumph and Tragedy of J. Robert Oppenheimer by Kai Bird and Martin Sherwin, took 25 years to research and write and clocks in at over 700 pages. He’s got a lot on his plate, and he’s one of a handful of filmmakers who can get mainstream audiences hyped for lots of scenes of scientists sitting in rooms and talking about stuff.


← Freema Agyeman Exits 'New Amsterdam' Ahead Of Its Final Season | Will the Senate Codify Same-Sex Marriage? →