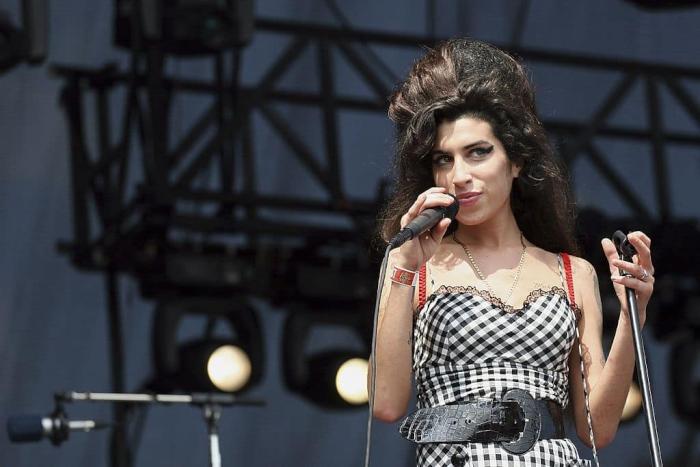 The Amy Winehouse Biopic Continues to Be a Terrible Idea

Production has begun on Back to Black, the biopic of the late singer Amy Winehouse directed by Sam Taylor-Johnson. The Grammy-winning musician who died at the age of 27 will be played by Marisa Abela, who you may recognize from HBO’s Industry. Biopics of tragic musicians are ten a penny in this business, and most of them are mediocre by design. They exist to sell records and to allow the estates and record labels to continue to cash in long after the artist in question has passed. I’m used to feeling queasy about these enterprises, but there’s something about this one in particular that makes me feel really sad.

First images of the film reveal Abela in costume as Winehouse, with Eddie Marsan playing her father Mitch.

A surprise first look at the Amy Winehouse biopic BACK TO BLACK.

- Production kicks off 1/16 in London

🚨 NEWS: marisa abela and eddie marsan on the set of upcoming amy winehouse biopic, “back to black”. pic.twitter.com/sLZs6X4lNP

Abela doesn’t look entirely like Winehouse but that doesn’t bother me personally. I think biopics get so wrapped up in achingly recreating the person’s appearance that they risk turning into Vegas impersonations rather than fully fleshed out people. Abela’s talented. I see why she’d want this role. But it does seem weird to me that they’ve been so half-arsed in the hair and make-up department. Winehouse’s look was so distinctive and so frequently replicated. Yet the eye makeup is too small, the hair too neat, the lips all wrong. Did Mitch tell them to tone it down or something? It looks so cheap.

And then there’s the Mitch of it all. This is a biopic supported by the Amy Winehouse estate, which is mostly the work of her father, a man with a terrible reputation. As shown in the documentary Amy, he only seemed interested in his daughter for her fame and what it could get her. He infamously said she didn’t need rehab when she clearly suffered from serious addictions. He pursued his own musical career off her back. To this day, he’s eager to milk the Amy train for all its worth, including supporting a hologram tour of a dead woman (that was mercifully postponed indefinitely.)

We see what happens in biopics where money and ego get in the way of the truth. Consider Bohemian Rhapsody, a film so heinous and morally repugnant in the way it twisted the life and illness of Freddie Mercury to make Brian May and Roger Taylor look like the real heroes of Queen. Even Elvis couldn’t help but gloss over tricky areas of Presley’s life, such as the age of Priscilla when they first met. Record labels don’t want to dent their precious assets’ images, even if their lives were mired in troubles and well-documented trauma.

There isn’t a single Amy Winehouse fan who isn’t keenly aware of what she went through and how she was treated. She was an addict, a woman with disordered eating, a troubled Londoner who found solace in jazz but struggled with a cruel spotlight. She was sardonic, kind, brittle, often mean, and frequently lonely. Her dad sucked. What does any fan have to gain from a film where her difficult truth will undoubtedly be diluted into a glitzy movie narrative to make money for those who barely helped her when she was alive?

Mitch Winehouse wants a big Hollywood biopic where he can be seen as a key figure in Amy’s success, and not the millstone around her neck as seen in the documentary and many press reports. At least Brian May played the guitar in Queen. Mitch just pecked at the scraps while Amy fell into darkness.

I wish we could just let Amy rest, but death never stopped the vultures from devouring their prey.