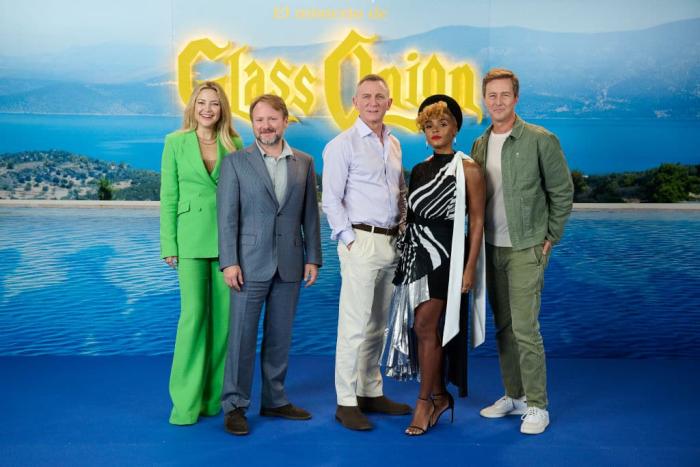 Dear Rian Johnson: Please Cast These Actors in ‘Knives Out 3’

Glass Onion: A Knives Out Story is ready for the holiday season. After premiering to huge applause at the Toronto International Film Festival (believe me, I was there), Netflix seems eager to get Rian Johnson’s sequel to his Oscar-nominated murder mystery in front of audiences. And we don’t blame them. After all, they paid a reported $450 million for the exclusive rights to two follow-ups to that movie.

Knives Out is a welcome return to the era of murder mystery ensembles, the kind we haven’t had in too long. Sure, Kenneth Branagh’s trying to revive it with his mediocre take on Poirot (complete with a tragic backstory for his moustache), but Johnson’s mysteries are funnier, sharper, and offer far more fun for his actors. The impressive casts for both movies are clearly having the time of their lives without sacrificing character for shenanigans. Really, it’s a dream gig, beaten only by the prospect of becoming the new Paddington villain (we deserve a Benoit-Bear crossover, dammit.)

I could be here all day writing a thesis-length list of actors I would love to see in Knives Out 3 but I have admirably restrained myself to eight figures. I feel like offering your choices for a Knives Out cast is the new pop culture litmus test, akin to offering your casting preference for James Bond. So, don’t take this too seriously, and feel free to add as many actors as you want in the comments. Sure, why not let this sequel have a cast of 5000?

We love and celebrate the Brenaissance, which has become one of the most truly positive and welcoming parts of pop culture in 2022. Brendan Fraser may be on the road to Oscar success thanks to his tear-jerking turn in The Whale but true afficionados know that he’s an old-school leading man who would fit right into Johnson’s world. His comic timing is spot-on and he’s at his most appealing when he gets to wield that mixture of retro charm and ’90s goofiness. He’d be the guy you’re convinced couldn’t be the killer but, as time passes, you wonder how much he has you fooled. Also, let him swear up a storm. He uses the F word so beautifully in Doom Patrol.

Every murder mystery needs a grand dame. The one and only Dame Julie Andrews is utterly deserving of such a role, one perhaps not unlike that of her The Sound of Music co-star Christopher Plummer in the first Knives Out. Or maybe she can be the devious schemer who knows everyone’s secrets. Hell, maybe she’s just a knife-wielding maniac dressed in Chanel. She can do it all. It’s about time we gave her another plummy role outside of a Bridgerton narration and that one sea monster in Aquaman.

I’ve been a huge fan of Hong Chau since she offered the p*ssy eater’s special in Inherent Vice. She’s the epitome of a supporting player who makes every project instantly better simply by turning up. Chau can be stoic, giggly, unnerving, weary, and outright odd, often in the same movie. I firmly believe that she can do anything, and now that she’s getting major Oscar buzz with The Whale, she should get in on the murder mystery fun.

There is no project that cannot be immediately improved by the addition of one Matt Berry. His ultra-creative approach to the basic act of verbal pronunciation should be preserved and studied for future generations. Few actors are able to elicit cackles of laughter from the audience through a mere inflection. The best thing about these Agatha Christie-esque murder mysteries is that it lets actors bring a touch of ham to the table. It’s a genre designed to pander to character actors who play to the cheap seats. Berry is king of that. Just keep him dressed as he is on What We Do in the Shadows and let him go wild. Jackie Daytona definitely did it.

The queen! What can’t she do?! In a fair and just world, Angela Bassett would be rightfully seen as one of the great actresses of her generation. Alas, decades of racism and misogyny have kept her shut out of the roles she deserved, and many of my friends have never gotten over her losing the Oscar for playing Tina Turner in What’s Love Got To Do With It? Few actors bring the regal energy she does, or the grit, when called for it. Put her on a yacht or in a grand mansion, preferably surrounded by gorgeous loyal footmen, and see where the story unfolds from there. She and Benoit would get on like a house on fire. Or become instant enemies. Either way, it’d be delicious.

Of course the Best Chris is on this list. While any iteration of Mr. Pine could fit into the Knives Out world, I would like to give a shout out to the recent hairy pool boy era of Pine. You know the one I’m talking about. That ‘are you looking for a cult leader’ flair. The long hair. The open shirt. The beard. The overwhelming sense of zen and chaos in perfect unison. The true heir to Jeff Bridges! Benoit’s already gone up against one Chris. Let’s see him tackle the best.

Banderas’ on-screen magnetism has been the stuff of near legend for decades. How can anyone resist that voice? But he’s also got impeccable comedic timing and a willingness to poke fun at himself. He gave one of his funniest performances in the recent Spanish satire Official Competition, playing an egotistical Spanish megastar who is totally not a piss-take on Antonio Banderas. Of course, he can also bring the tears if needed. Just pick any one of the films he’s made with Pedro Almodovar at random to see his impeccable range. Maybe he can try to seduce Benoit? I’m up for that. Also, like Blanc, he sings Sondheim. Speaking of…

We know that Johnson is a musicals fan, especially of Sondheim and Lloyd Webber (his not-so-secret fanboying of The Phantom of the Opera is an endless delight to me, a fellow Phantom trashbag.) What better way to pander to his interests than to bring one of the grand divas of Broadway to the scene of the crime? Lupone is bombastic to her core. You have to be when you’ve played Mama Rose and Eva Peron. If ever there was an actress ready to play an attention-grabbing countess with secrets as big as her fur-lined hats, it’s Patti. Besides, isn’t it about time we got some musical numbers in this series? You know Benoit needs a good show-stopping climax.