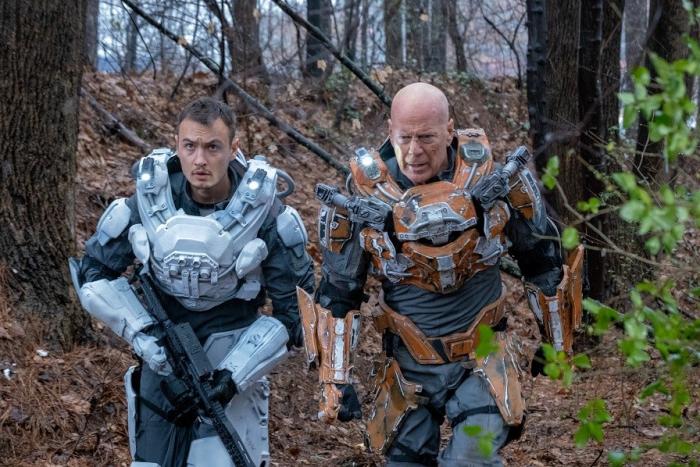 Now on Netflix: Frank Grillo And Bruce Willis' 'Cosmic Sin' May Be A (Failed) Test Run of Deep Fake Technology

Cosmic Sin cost me $5.99 to watch on Amazon Prime. That was approximately $129 too much, and I will be issuing an invoice to Amazon that I expect to be credited to my account.

The movie is nominally about first contact with alien life, which we then proceed to blow up. It also is only nominally a movie, since it has the approximate production values, writing quality, and acting skill of a high school film club production.

I apologize. That was uncalled for and hyperbolic.

A high school film club’s film does not deserve to be compared to this movie’s utter abandonment of anything approaching filmmaking other than literally accomplishing the definitional task of recording moving pictures.

There is no visual creativity whatsoever. Earth looks like it does now. And then there’s another planet with a forest, and some aliens that are alternately humans with some smeared mascara or dudes dressed exactly like they bought Halloween costumes of Nazgûl. I mean literally, I am pretty sure that they’re wearing the Nazgûl helmet and gauntlets from Lord of the Rings. Other than that, there are a couple of empty warehouses in which they have long drawn-out firefights.

There are some shots of space with spaceships, but they would have looked dated on Babylon 5 on UPN in 1995. I cannot express clearly just how terrible the visuals are. Any random sci-fi video game from the last 20 years looked more convincing on screen than whatever this was.

For instance, if the film’s world is set in the 26th century, why does it look just like the outskirts of Cleveland, complete with strip malls, dive bars, jukeboxes, interstates, and late model pick-up trucks from 2010? At least the high school film club would have slapped some cardboard thingamabobs and cleverly glued glowsticks onto Frank Grillo’s truck to signal we were pretending it was five hundred years from now.

And speaking of Grillo? And Bruce Willis? I mean, there is sleepwalking through a role, and there is whatever these two are doing in this movie. But I find it hard to criticize them too much, because at least they showed up on set, which is more than can be said for the screenwriter.

Was there a screenplay? I am convinced there wasn’t. Every word spoken by every character is a cliché. Literally, every single line uttered in the movie feels like it was copy and pasted from a Buzzfeed list of things people only say in movies that we are sick of hearing. There are entire conversations between characters where those cliché lines are strung together, except with none of the small stitching of other words to make the conversation make sense.

“All of our shots are lucky shots.”

That is an actual three lines of dialogue. In a row. A human being did not write this. Human beings did not say this.

Every bit of dialogue by every character has weird spacings and intonations like one of those computer voice menus going full Shatner. “Take THIS … man … to. THE brig, soldier. Dial 3 for other calls”. Every sentence spoken has a pause after it that is slightly too long like no one knows their lines and is waiting for the cue card off-screen to flip over. Or because the computer cut and pasting random audio together like a hostage taker pasting together a ransom note with cut-out letters just didn’t quite understand how long to make the pauses before words and sentences sound natural.

I am being absolutely serious when I suggest the possibility that none of the actors are actually in this movie, and that the entire thing is a (failed) test run of deep fake technology. The editing, acting, and dialogue are genuinely so bad that I find that alternative more believable than a camera actually being pointed at living human beings that spoke like this.

This extends to the action as well. There is essentially no discernible action in the movie, despite it being a sci-fi action movie. I mean, they pretend there’s action. There are lots of scenes of people shooting guns. But almost all the camera shots are in tight focus on the person shooting.

Every aspect of this movie is so incoherent that I kept pausing it to make sure I didn’t smell burning toast.

I do not understand how a movie can be this utterly amateurishly made on every level, and yet still have a pair like Grillo and Willis in it. Not because those two won’t demonstrably take a paycheck to be any pile of dreck, but exactly because it required a paycheck and there is no evidence on screen of any actual money being spent on anything else.

I honestly urge you to light six dollars on fire rather than spend it on streaming this movie.

Originally reviewed for its theatrical release in March of 2021, Cosmic Sin is now on Netflix.