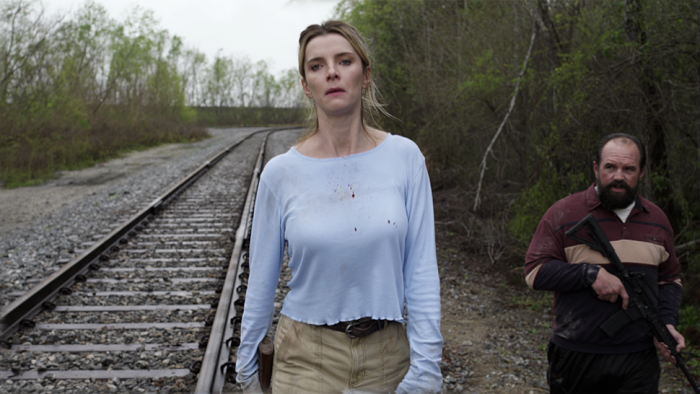 Spoilers for The Hunt.
It opened in theaters the weekend before most theaters shut down in March, but The Hunt has been hanging around in the upper levels of the VOD and iTunes charts for over two months now. Ciara reviewed it back in March, and I find absolutely no fault in her negative review. It’s a bad movie.

1. Glen Howerton, Justin Hartley, Ike Barinholtz, and Emma Roberts are all in The Hunt just long enough to appear in the trailer, but their roles would barely even qualify as cameos. In fact, Emma Roberts — whose character name is “Yoga Pants” — only delivers maybe 3 lines, including, “It almost hit me,” referring to a bullet that whizzes by her head. The next bullet, however, splatters her brains on the side of a crate. Two minutes later, Justin Hartley steps on a landmine and explodes. Barinholtz survives 23 minutes into the film. At least a million dollars must have gone toward those four cameos.

2. Damon Lindelof wrote the script along with Nick Cuse, who served as a writer alongside Lindelof on The Leftovers and Watchmen. I have no idea how this mess came from two minds responsible for two of the best television series the last decade. Ten times more effort must have gone into the writing for one episode of Watchmen than went into the entirety of this script.

That said, I have a screenwriter friend who once told me that most scripts that are bought and produced begin as good scripts, and that when he watches bad movies, he tries to find the germ of a good idea beneath the mountain of bullsh*t shoveled onto it by the studio and/or director. However, this is a Blumhouse pic made for a relatively small budget of $14 million. How much interference could there have been? Is it possible that Craig Zobel (Compliance, Z for Zachariah) misread the tone of the script? It’s hard to say, but as written, the jokes in The Hunt read like a bad Twitter fight being translated onto the screen by Chuck Lorre (Two and a Half Men, Big Bang Theory).

3. But seriously, I don’t get it. Lindelof gets a bad rap for his film work — Prometheus, Tomorrowland, Star Trek Into Darkness — but those movies did or did not work for totally different reasons. The Hunt feels like a back-of-a-napkin script someone pulled out of a drawer, and the fact that it took two people — Lindelof and Cuse — to write this movie makes no sense to me unless they were engaged in some kind of exercise where they thought they could successfully sell out for some quick money by making a very broad version of The Purge that badly makes fun of both sides of the political spectrum with jokes that would feel right at home in Shear Madness.

4. I cannot believe that Universal pulled this film because of Donald Trump’s objections. This movie? Honestly? There is nothing provocative or controversial here. There’s a moment early on where Crystal — a character played by Betty Gilpin — asks a couple working at a convenience store what state she’s in. When they tell her “Arkansas” after Crystal buys a pack of cigarettes with a $20 bill and they give her $10 in change, she immediately recognizes that they are lying. “Cigarettes in Arkansas only cost six bucks. You f**cked up, bitch!” Crystal tells the cashier before blowing her away with a shotgun. That’s the caliber of writing here.

6. At one point, Gilpin tells a horror version of the tortoise and the hare story, where the tortoise wins but the hare comes to the tortoise’s house that night and kills his entire family with a hammer. It’s a terrible, poorly written story, and yet, I hung on Gilpin’s every word. It is insane how much better she is than this movie.

7. My favorite part of the movie is when Crystl (Gilpin) is peeing, and Ethan Suplee — whose back is turned to her — says, “My name is Gary,” and Crystal snaps back with irritation, “Shut the fuck up, Gary.” That is Suplee’s billed name.

8. OK, there is another line that is outstanding. As one of the liberal elites is lying on the ground with an arrow through her stomach, Crystal holds a gun to her head. A redneck yells, “WAIT! You can’t shoot a woman!” and Crystal says, “Ms., do you think you should be afforded mercy just because you’re a girl?” When the feminist woman replies, “No,” Crystal shoots her in the head without missing a beat.

9. If you haven’t seen the movie yet, it’s worth mentioning how The Hunt gets started. A bunch of “liberal elites” in a text thread joke about hunting “deplorables” for sport. It’s just a joke, but the text thread falls into the hands of some right-wing conspiracy nutjobs, who make bad-faith arguments that these liberals actually are hunting Trump voters. Those bad-faith arguments lead to the firing of Athena Stone as CEO of a big company and she decides to kidnap all the conspiracy theorists and hunt them for sport as revenge. This scenario is the most realistic thing about this movie.

10. The weird thing about The Hunt is that, while it’s no good, I have watched it twice. In three days. That’s how much I like Betty Gilpin in this. The showdown between Gilpin and Hillary Swank in the end is terrific, although the elitist Athena being surprised by the deplorable Crystal having read Animal Farm is so on the nose that it hurts my soul.

Moreover, having watched it twice now, I have to come to terms with the fact that, while it is not a very good movie, I did not hate it. It’s got a very rewatchable Saturday afternoon hungover vibe. It’s too bad The Hunt got delayed, and then Coronavirus’d because it really could’ve been another break-out role for Gilpin.


← Remember the Robsten Cheating Scandal? | TNT's 'Snowpiercer' Is Basically 'Murder On The Survival Express' And That's Fine, I Guess →