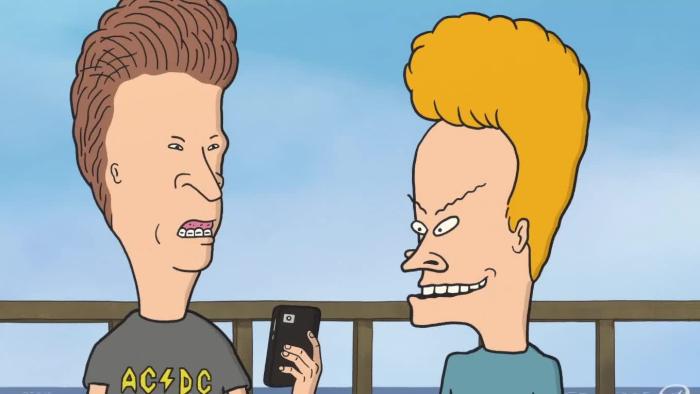 Given all the positive reviews that Beavis and Butthead Do the Universe has received, I’m not going to be the buzzkill and suggest otherwise. It’s funny. Occasionally, very funny. Of the MTV throwbacks, it’s much better than the brief and nearly-forgotten resurrection of Punk’d, although it does not rival Jackass Forever.

Mostly, Beavis and Butthead Do the Universe succeeds by remaining 100 percent true to itself. The characters do not evolve. There are no new twists on the old jokes. If you still think it’s funny when Michael Scott says, “That’s what she said” — and it can be, when deployed correctly — you’re going to love Beavis and Butthead Do the Universe, which holds no mirror to itself as much as it breaks the mirror over its own face, leaving shards of glass sticking out of its eye.

For a refreshingly brief 90-minutes, Do the Universe offers a reprieve from the real world by almost completely ignoring the real world, save for a moment when B&B exploit their white privilege. Beavis and Butthead Forrest Gump themselves into space, through a time hole, and into the present (positioning themselves for the forthcoming series), where they spend some time in a college gender studies class and in prison, all in an effort to have sex with Serena, an astronaut and later governor voiced by Andrea Savage. They make the same five jokes they always make, and the movie begins and ends with Beavis and Butthead right back where they always are: Sitting on their couch, as virgins, watching TV.

It’s less a movie and more of a mash-up of old episodes, and that’s fine. Beavis and Butthead are dumb! They mistake every statement for a reference to sex. They like to say bunghole! It doesn’t need to be any more than that, and it would be dishonest to the characters to be otherwise. Not everything has to “grow” or “evolve” or “be relevant” or provide commentary on the state of the world. Sometimes, a dick joke is just a dick joke, and for 86 minutes, that’s all that Do the Universe amounts to: A whole lot of dick jokes, which are variations on the same dick jokes the series deployed 30 years ago. If you liked Hot Pockets in the ’90s, I suppose there’s no reason to believe you’d stop liking Hot Pockets in the 2020s.


← Alec Baldwin, King of Bad Ideas, To Interview Woody Allen on Instagram | Every Version of 'Father of The Bride' Compared →