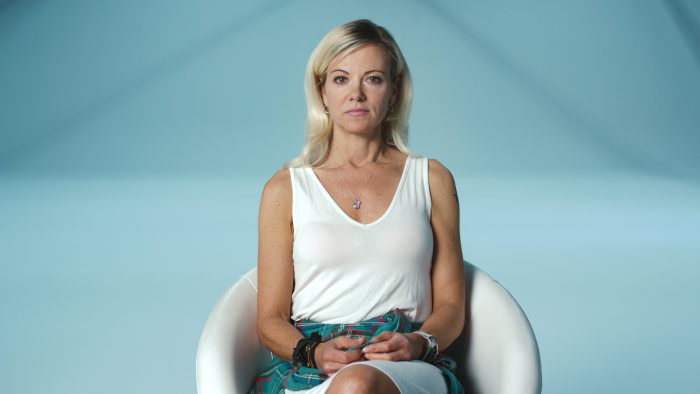 All things considered, I thought that director Chris Smith’s Bad Vegan docuseries painted a mostly favorable portrait of its central subject, Sarma Melngailis. It briefly raises the question that Melngailis could have been an active participant — instead of a brainwashed victim — in the scam that robbed investors of millions of dollars and her own employees of their wages. However, the docuseries most strongly suggests that she acted under the spell of Anthony Strangis’ lies.

Chris Smith could have, for instance, emphasized her history of bad romantic decisions. For instance, early on, her first business partner and boyfriend, Matthew Kenney is depicted as the one who was irresponsible with money, and while that certainly might be true, it’s ironic given what we later find out about Melngailis’ financial decisions. The documentary also doesn’t get into the fact that her chief investor Jeffrey Chodorow had his own shady history — he was investigated for money laundering and served four months in prison for bankruptcy fraud. Obviously, her almost romance with Alec Baldwin does not speak well to her taste in men, nor does her fling with Louis C.K., or the fact that she had a lengthy (but very consensual) affair with the attorney representing her in the very case at the heart of Bad Vegan (Her attorney, Jeffrey Lichtman — who also defended El Chapo — should know that sleeping with a client is highly unethical).

Bad taste in men does not a criminal make, however. All of which is to say: Given what Smith left out but could have included, the cut of Bad Vegan that made it to Netflix seems mostly pro-Melngailis. In fact, she said herself on Instagram that she was mostly happy with the way it came out, although she had some issues with the way that Netflix marketed the film, and she thought that the phone call between her and Anthony Strangis at the end was “disturbingly misleading.”

For those who need a refresher, after Bad Vegan spent the better part of four episodes interviewing Melngailis about the lies of Strangis, how badly he screwed her over, and essentially what a monster Strangis was, the final scene features a not unfriendly phone call between Melngailis and Strangis (how the director obtained a
recording of the phone call is an open question). In the phone call, Melngailis did make clear that she was over Strangis, but they were also civil and even joke-y with one another, not that being polite to someone who scammed you means that you are complicit in the scam.

Strangis: Hello?
Melngailis: Hi, can you hear me?
Strangis: I can hear you, yeah. I was gonna… I almost texted you last week. You Know I miss you. I do miss you.
Melngailis: * Makes gagging sound *
Strangis: Really?
Melngailis: That’s my response. You realize you do have to step out of the meat suit and appear on a unicorn.
Strangis: I know that, and it’s already in the works in my mind. There will be something.
Melngailis: You’re gonna shapeshift in front of me?
Strangis: I mean…[laughs]
Melngailis: [laughs] Come on, you know I’m serious!
Strangis: I know you are. Well, I can still make you laugh so that is good.
Melngailis: Yeah, no it’s not good.
Strangis: Yes, it is. In a long period of time, I’ve been all over the world been in all different places, and met all sorts of people over a whole lot of years. I love you. You’re the smartest person that I’ve ever met, okay? And you’re the most beautiful thing.
Melngailis: It f**king* pisses me off because you’re right.
Strangis: It was really good hearing your voice. All right, Sarm. Good night.

“The inclusion of the last phone call isn’t to imply that Sarma and Anthony were still close. The call is dated ‘22 Months After Prison’ — and Anthony clearly says at the end of the call ‘it was nice to hear your voice’ —which we feel shows that communication between them is not common.”

“In this call, we found Sarma to be confident and strong—making fun of the tales Anthony had spun, telling him that he had to show up on a unicorn for there to be any reconciliation (meaning there is no reconciliation).

“Lastly, this call was one of the few pieces of audio we found of them communicating in a way that helped us understand their relationship in the first place.”

It’s also worth noting, FYI, that though Melngailis was not directly paid for her participation in the documentary, as part of their arrangements, Netflix did pay the employees that Melngailis owed after her 2015 disappearance.


← Seth Meyers Clarifies That His Children's Book Is Not A Joke | When a Politician Says He Thinks 'Loving v. Virginia' Should Be Abolished, Believe Him →