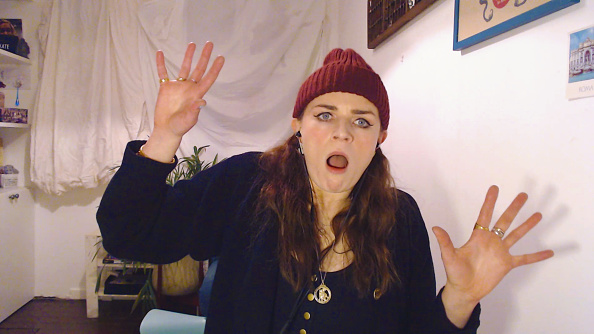 Fans of Aisling Bea, which should include all of you (watch This Way Up or her season of Taskmaster!) know that the actress/comedian is famously Irish. Irish people famously speak with Irish accents. English people, as most of you know, speak with English accents. Social media was thus confused yesterday after the premiere of the (cringe-face) Home Sweet Home Alone trailer as to why Aisling Bea — who is Irish — spoke in the accent of an English person since she is famously Irish, not English.

Aisling Bea with an english accent is the worst thing that’s ever happened to me https://t.co/IxdpczvXeY

Bea took to Twitter yesterday to address the “uproar” over the English accent of a famously Irish person, and honestly, her droll response is more amusing than anything seen in the Home Sweet Home Alone trailer.

It is also not a true crime documentary about a Mother who leaves her son alone to fend for himself, because if it was I would be in jail. #HomeSweetHomeAlone @disneyplus pic.twitter.com/zO1JJe8GIk

Now, it is true that Bea’s Irish accent is lovely. It is also true that her English accent is dodgy. I would be reluctant, however, to call it a hate crime, because that distinction belongs solely to every accent in Cold Mountain:


← Amber Ruffin Agrees That Trump Has Done A Lot For Religion In Hilarious Sketch | 'I Am Weed': That Megan Fox and Machine Gun Kelly Interview Has Inspired a Lot of Jokes →