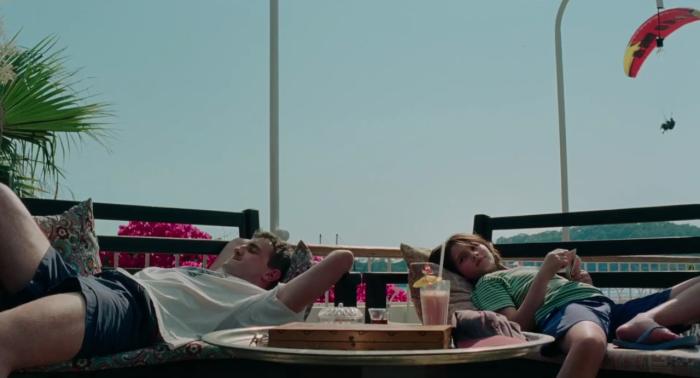 'Aftersun' Review: Sometimes The Past Is Everything But Ambiguous

I wonder how the section of the Internet film discourse that can’t process ambiguity and needs an ENDING EXPLAINED video for everything will process Aftersun, the debut feature film by Scottish filmmaker Charlotte Wells because I don’t think there is anything ambiguous about this movie. Everything you’d need to know is there on the screen.

Aftersun follows sparkly 11-year-old Sophie (Frankie Corio in her debut role) during a summer holiday in Turkey with her dad, Calum (Paul Mescal), during the late 90s or very early 00s. Interspersed are scenes with a 31-year-old Sophie at a rave located somewhere at the intersection of reality, dream, and memories, the strobing lights and dancing bodies showing glimpses of her father at the same age he was 20 years ago.

Calum is 31, making him a technical adult when he had Sophie, but still too young, too undeveloped to be a father on top of being loving. Sophie lives with her mum in Scotland, while Calum comes and goes around Southern Europe, picking up temporary jobs here, failing to start businesses there. A traumatic upbringing prevents him from going back to Scotland, but they still follow him everywhere in the way his head and back curve slightly downwards or in the sadness in his eyes. Still, he buries all that under a Kevlar mask when Sophie is near, so he can always show himself as fun, loving, and caring. Until he can’t. Sophie is intelligent, funny, and lively, at the transition point where loved-up teenagers are still funny and icky, but also when she starts developing feelings for boys her age. She is perceptive but perceptive in a delayed way, perceptive in such a way that her brain registers, her amygdala generates the blueprint for an emotional response, but everything in between has not been coded or given a language yet. Memory as a delayed fuse is the entire motif of Aftersun.

We understand all of this only through how Wells frames her subjects, how she directs the performances, and a few lines of dialogue. Unlike other movies that one might classify as “mood pieces” or “contemplative,” there is conversation and “wordiness” in Aftersun. Calum and Sophie are always interacting with their words, those kinds of conversations where something very important is discussed out loud (So, how come you and Mum say, “love you?) sandwiched between jokes and filler conversation, but the kind of filler conversation that becomes etched in your memory. Wells takes all those moments, the ones other, less inventive directors would discard as insignificant, and pieces them together with those which clearly will become life-altering in the future life of Sophie. The kind of moments less inventive directors would set to swelling scores and close-up shots of actors ACTING. Would other directors set most scenes during the magic hour, making the best out of the colors of the Mediterranean sunset? Wells chooses instead to set them during the day and early afternoon, a blaring sun forcing the characters inside or to lay languidly on pool chairs, or in the late evening and night, lit by the inefficient halogen lights of the late 90s. Wells retrieves the memory of things that become ingrained despite not necessarily being The Most Transcendental Thing Ever. These scenes are, in and of themselves, raw data, mostly ambiguity, if not for how Calum’s sadness permeates them.

Several scenes, however, are shot using a DV camera, a brand-new purchase by Calum, sometimes used by him, sometimes by Sophie. It’s those scenes that tell us everything else without telling us anything directly. Family holiday videos always leave sadness outside the frame, even when the camera operator does not have a steady hand. But when has homemade footage, in the language of film, ever not been an ominous sign? When has it ever signified something other than loss? Wells, again, paints with it, maximizing every frame of a medium mostly known for being low-fi and rugged.

Charlotte Wells, recreating very personal experiences, uses ambiguity not for us to fill with our own theories or, worse still, to leave it at that and say “the director made it ambiguous for a reason, please don’t touch.” Wells clearly sets out the story she wants to tell, what happened is very transparent because her story is about what we do with memory, with the things we lost and lost much too early.

That is the ambiguity that matters to Wells, the expansive kind, the one that allows for new questions and attempts at answers. What do you do with memories that are well preserved in your mind-brain, memories you even have on film, but that are only now beginning to have a language, forcing you to relive the event? What do you with memories that, in combination, cannot yield a clear answer? Calum was kind, cuddly, beautiful, protective and close. But he was also not there for her in the before, not responsible enough, not constant enough. And then what happened becomes evident.

Paul Mescal is absurd; it is astonishing at how he can become someone completely different without turning off the pull of his charisma. Frankie Corio is, well, remember when you saw Saoirse, or Dakota in their first roles? Same thing. Charlotte Wells has produced something that will have us talking for years and years to come, each layer of Aftersun containing more layers that connect with other layers. Did I mention the needle drops? Because once again, Wells takes what could be an almost predictable selection of songs, the songs you would expect to hear in a resort for Brits during the late 90s, and resignifies them with the emotional load of having imprinted themselves on your memory. You’ll know which.

Aftersun is currently on VOD in the USA and streaming on MUBI elsewhere.

Alberto Cox recommends this thread by YouTuber Broey Deschanel for an insightful and brilliant angle.


← Whatever Happened to the USA Network? | 'Koala Man' Review: So, About Justin Roiland's Domestic Assault Charges →


Image sources (in order of posting): A24, MUBI, BBC Films
Most Viewed