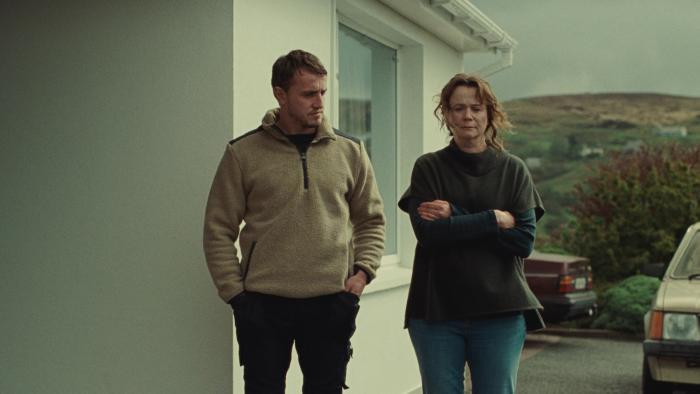 In 'God's Creatures,' A Mother Has to Choose Between Her Son or the Truth

Just like with all classic tragedies, the two-fold one at the heart of God’s Creatures is deliberately telegraphed through the cinematic conventions of planting and pay-offs. This is not a mark against it, only a warning against potential spoilers. And trigger warnings on sexual violence.

The favoritism of mothers towards their sons might be as universal as it gets, especially so for the elder or sole male child. But in Catholic culture, as I mentioned before, the fixation on Virgin Mary as mother to a son makes up at least one third of its foundations. At least when measured in the amounts of hymns and songs devoted specifically to Mary as a mother to a son, always either suffering, longing, or accepting. This creates a mindset that is pretty useful if your son happens to be as great a guy as Jesus. Most men are not like Jesus and some, way too many, are his direct opposite. Some end up being terrible, power-hungry men. Like King Herod, or Peter*.

God’s Creatures, directed by Saela Davis and Anna Rose Holmer (The Fits), also opens with a tragedy: A young fisherman drowns in the tides because as superstition dictates, fishermen shouldn’t learn how to swim. Emily Watson stars as Aileen O’Hara, a shift manager at the local fish processing plant. Shortly after the young man’s death (a son of a coworker and friend, as they all are supposed to be in these little towns), her only son, Brian (Paul Mescal), returns after a long stay in Australia. Like with the prodigal son, Aileen couldn’t be happier, even though we are shown hints throughout that Brian is a ne’er do well of sorts, someone who couldn’t hack it in Australia (I’d guess Irishmen are the one kind of immigrants that wouldn’t be rejected there), coming back with no marketable skills to a place with no job prospects, save for the fickle promise of his grandfather’s oyster farms. None of that matters to Aileen, who dotes on him as Catholic mothers will always do. It’s also hinted that she has always pampered him beyond what’s reasonable like when she steals oyster baskets from the processing plant for him, pays for his drinks at the pub, or looks the other way when he contrabands salmon. Or when she picks the goddamn clothes he leaves on the floor, working or otherwise.

As the weeks pass, Aileen receives a call from a friend at the local Garda (police) station, the officer informing her that a rape accusation has been levied against Brian (though in much more diluted terms than those), and it is up to Aileen to corroborate his alibi. She does, because a mother’s denial about her own sons can be powerful enough to change the past, even though we have just seen that night in question and we know that she cannot vouch for Brian’s whereabouts.

The victim is Sarah Murphy (Aisling Franciosi), a coworker and childhood friend of her daughter Erin. A girl she has known her entire life, effectively a niece-daughter in the extended family that are those small towns. She tries to justify it and explain it away based Sarah’s long relationship with an abusive man. Emily Watson breaks your heart conveying the guilt, doubt, and denial she goes through, and the directors work with her by slowly shifting to close-ups focused on her face, while things fall apart around her as she comes to terms with the fact that Brian, her beautiful boy, is indeed one of those guys. The patriarchal structure (deftly portrayed by the directors as it actually happens: sometimes subtly, sometimes blatantly) already has him covered, but something has already been broken in the town’s community, in her standing as a maternal figure to all, and in her own family, as her daughter stands firmly with Sarah. In the end, the only way to solve one tragedy — the social one brought about by Catholic culture and goddamn Marianism — is through another tragedy, one brought about by those superstitions. But what good is it anyway?

Paul Mescal is something else as Brian. He plays the charmer, the finest guy in town that his mother sees in the first half, and then one of those guys without changing a single beat — credit to how the director’s way of working with the actors and the tonal transitions. Aisling Franciosi completes the tragic triad with a performance that is all about her voice. Not just her disarming singing voice, but her speaking voice too, a low and whispering register which tells us everything about Sarah, another young woman tethered to a town, even though she clearly had the resources (physical, intellectual, and financial) to leave it, broken down by patriarchy until the incident broke down her last ties to a place she loved.

The last minutes and frames of the movie are dedicated to Franciosi’s performance, elevating her from the role of tragic device. I wish her character had more screen time so we could see more details about her relationships with the O’Hara family, Brian and Aileen in particular. It’s one minor absence in a film that, overall, delivers. Special shout-out to cinematographer Chayse Irvin for going with a more washed-out palette that is never dull or grey. The usual temptation with these Irish seaside settings is to romanticize its natural beauty.

*Alberto Cox is firmly on team Judas Iscariot was Jesus actual Best Friend and the only one who knew, as a follower of the Kazantsakis Gospel


← The Latest 'Atlanta' Features Yet Another Problematic Male Celebrity | What the Ending of Netflix's 'Midnight Club' Is Trying to Say About Life, and Death →


Image sources (in order of posting): A24, BBC Films, Nine Daughters
Most Viewed