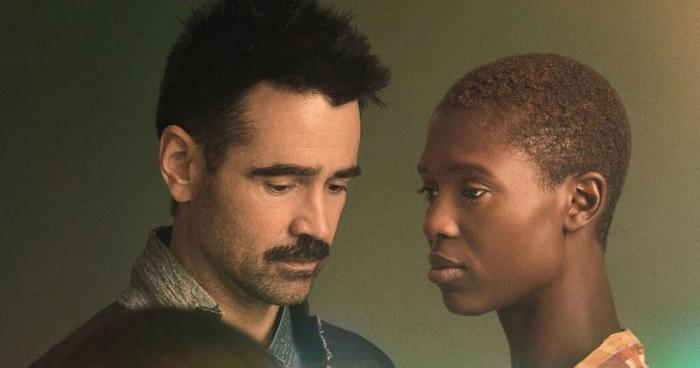 On Showtime: ‘After Yang’ is a Complex Story of Humanity in a Simple Tale of a Busted Bot

Science fiction has been a conduit for all sorts of expression. Its spectrum is as wide as that of genre itself, from monsters versus aliens battling it out in the Pacific Ocean to cyborgs programmed to be lovers as an exploration of humanity. Somewhere in the middle, but most certainly to the latter end, sits After Yang, a subtle tale of facets of humanity seen through the eyes of a robot.

Colin Farrell holds the audience’s hand as Jake, the patriarch doing his best to repair his family’s broken android. Jake and Kyra (Jodie Turner-Smith and her angelic voice) are the adoptive parents of Mika (Malea Emma Tjandrawidjaja), and to help the Chinese girl adjust to her surroundings, purchased Yang (Justin H. Min), an android of sorts to act like her big brother and help connect her to her heritage. This is a common action in this version of reality, one where there’s an empire of “techno-sapien” shops that feel all too similar to cell phone stores that prefer you to trade up than repair. When Yang malfunctions, Jake is set on a path of discovering not just all that Yang was, but all of what his family is, and how much more Yang saw of them than he did. Via Jake’s journey from repair shop, to underground techies, to museums and his secondary journey through Yang’s recorded memories, After Yang explores the vivacity of life itself in a time of grief. Jake shuffles through the memories of his faulty android like one might rifle through the personal effects of a lost loved one, putting together the puzzle pieces to discover what was important to them. It’s a delicate dance of breaching privacy while becoming closer to a lost loved one, and in Jake and Kyra’s case, the exercise reveals to them the value of things that remain.

Writer and director, Kogonada, gorgeously tackles complicated emotions using a neutral painted setting and the restrained performance of his lead. What’s magical about his version of this tale (adapted from a short story by Alexander Weinstein) is that there’s no clear arc for the characters to blast through, but more a persistent mood that flexes around the characters’ experiences. Jake is a stand-in for the icy father who has a poetic attachment to his career, one that only shows itself in quiet conversations with Yang. His demeanor almost never fluctuates, but his wants are clearer to him as he explores Yang’s recorded snippets. Each moment spent on the fatherly pursuit of repairing his child’s robot is a moment where his outer shell cracks and reveals the part of himself his wife and daughter appear to be longing for.

Kogonada is sneaky about where he drops his themes, presenting what manages to have a shiny aesthetic reminiscent of Minority Report and burying so much heart that it’s fathomable for everyone to have a different experience with the text. As it plays through, it feels like a story of parenthood, or the realities of cultural connection. Sometimes it feels like a story of growth or siblinghood, or the relationships we have with our technology. Often it feels like a philosophical pursuit of the blurring lines between humans, humanoids, and sub-humans. Then, just when you least expect it, it reminds you it was about grief and the power of love. All of this stuffed into a lilting dance of a man cruising to repair shops and watching video clips on his VR rig. (It almost makes you long for the fleeting metaphors of early episodes of Black Mirror).

Plucking through Yang’s memories and showcasing what he deems important functions to blur the line between us and our AI. Moments like his desire to understand art (as played through a gorgeous conversation about tea leaves) highlight Yang’s desire to understand humanity. Robots desiring to be more human has been portrayed in films before, but Yang’s adjacency to humanity uses elements of robotic function to mirror philosophical or religious themes. The more his desires are explored, the more Yang feels like a conduit for reincarnation, and his technological capabilities become a way for humans to empirically experience life after death. The film wants these lines blurred, fudging them further with clones and variations of “techno-sapiens,” tapping into our natural desire to question these concepts.

It’s difficult not to continue to circle back to the film’s aesthetic multiple times as its setting is imperative to many of its successes. The omniscient sounds of voices on the phone paired with the inviting score, the sharp lines that are paired with asymmetry and warm lights, the greenery framed with tight corners and closely adjacent windows, all create that blend of Blade Runner’s futuristic tone with the whisper of something like The Lovely Bones.

After Yang is the kind of science fiction that uses a not-so-distant future to suspend just enough disbelief to allow us to explore complicated concepts through the lens of fantasy technology. It takes something so simple — your robot big brother broke — and parlays it into a metaphor for various human experiences. After blending the human capability of memory with the photographic recreations of a robot, it ends with a simple whistling of a song that reminds us that memories are like a legacy that allow someone to live forever within us.