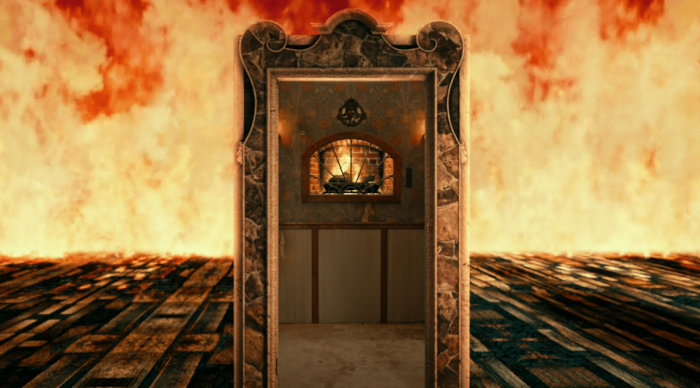 'Adult Swim Yule Log' On HBOMax: What Did I Just Watch?

I don’t want to give too much away about Adult Swim Yule Log aka The Fireplace, but I also don’t want to encourage anyone to watch this because it’s an incredibly dumb movie. Incredibly dumb movies are directly in my wheelhouse. To be fair, it’s probably no dumber than any of the Hallmark “Holiday” movies. Just with a lot of gore, and a cursed yule log that is tied to our country’s racist history. The story only vaguely makes sense when put into context with movies like Barbarian and The Strangers. They could have just left it at red-neck, home invasion in the woods (plus a magically cursed yule log.) But writer/director Casper Kelly got overly ambitious and decided to throw in space aliens, time travel, and devil worshippers, like half-cooked spaghetti flung at a wall.

If someone had told me this was created by the guy behind the 2014 Adult Swim short Too Many Cooks (eleven minutes of escalating weirdness masquerading as an ’80s sitcom intro that you can watch here) I would have made myself a pitcher of cocktails before watching it. Kelly is also responsible for this Cheddar Goblin commercial in Nic Cage’s ultra-violent 2018 movie Mandy.

Those two projects give a fairly accurate window into what Adult Swim Yule Log looks and feels like, except it’s an hour and a half long. It definitely could have been done in an hour. Hell, it’s a story that probably could have been told in a half an hour. Kelly would have had to leave out a lot of the unnecessary business and I’m not sure he’s capable of self-editing. The basic plot is solid. Alex (Justin Miles) has arranged for a romantic weekend away in a quaint log cabin with his girlfriend, Zoe (Andrea Laing.) They’re interrupted by a sheriff and his deputy arriving to tell them there’s a killer on the loose in the woods, which does a lot to kill the whole mood. Then a quartet of social media influencers/podcasters appears at the door, having made reservations for the cabin too. Yep, the place is double booked and there’s nothing to do but wait until the morning to sort it out because the owner has mysteriously vanished. Good thing there’s a hot tub! Over the course of the night, there’s a lot of blood, a lot of time travel, and flashbacks to the cabin throughout various periods of American history, a little demon dude in the fireplace, and space aliens. The less I say about all of that the better. I may have said too much already. 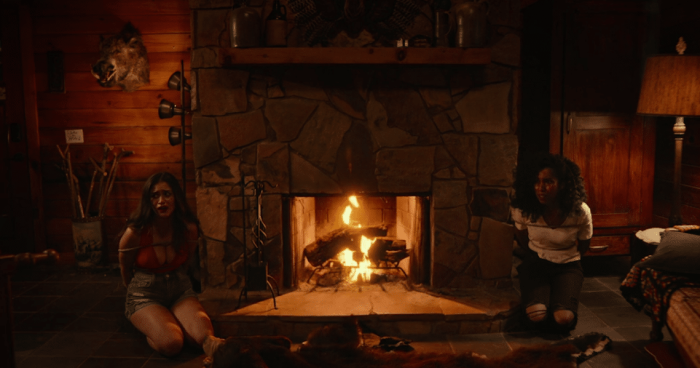 The cast, the effects, and the script are all solidly in B-/C movie territory. It is the kind of low-budget weirdness that only Adult Swim can get away with. If this had been on Prime or Netflix, I wouldn’t have made it all the way through and probably would have spent some time questioning the wisdom of my continued subscription. Adult Swim though? Pshht. Bring it.

A couple of weeks ago I wrote about The Mean One and was psyched when the production company said they were going to send me a screener. But then they didn’t. Booo! Adult Swim Yule Log scratched that particular itch for me. I think Casper Kelly has some interesting, creative ideas. I’d like to see what he can do with a proper budget and a little script doctoring. Or at least an editor. And maybe a slightly higher-tiered cast. Not Chris Pratt though, please. Sorry, Justin Miles.

Adult Swim Yule Log aka The Fireplace is now streaming on HBOMax and on adultswim.com