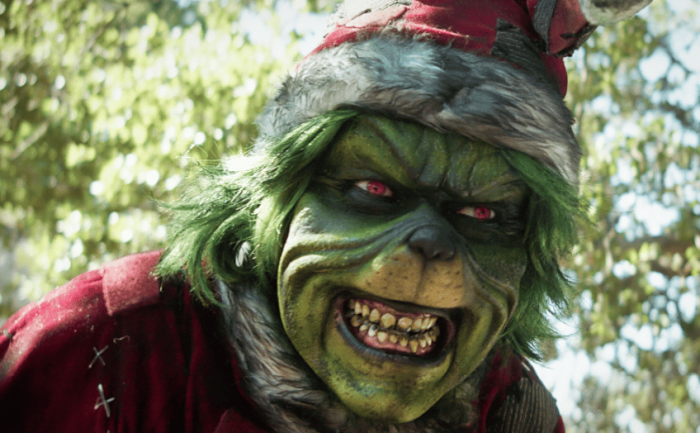 'The Mean One' Trailer: Everything From Our Childhood Is Terrifying Now

Do you know how sometimes the collective unconscious means we get two movies in the same year about alien invasions or catastrophic volcanic eruptions? Or three television shows about angels? I don’t know what’s going on in our brains this year (yeah I do, everything is terrible) but 2022 has become the year all of the beloved, animated friends of our youth make an about-face and become terrifying, live-action villains.

In August Winnie the Pooh: Blood and Honey was announced. Last week, stories about a new, macabre version of Bambi started circulating. Yesterday, the trailer for a new Christmas horror movie dropped.


The Mean One is a “Grinch Horror Parody,” a phrase that only entered the lexicon yesterday as far as I can tell. It stars Terrifer 2’s David Howard Thornton as The Grinch. If you thought Jim Carrey’s Grinch was unpleasant looking, get a load of the header here. Yuck. Krystle Martin is an adult Cindy Lou Who, whose parents were killed by The Mean One 20 years earlier.

One Christmas Eve in a sleepy mountain town, Cindy’s family is killed and her Christmas is stolen by a bloodthirsty green grouch in a Santa suit. Twenty years later, Cindy returns to town with one goal - trapping and killing The Mean One.

My only question is, will there be a tiny dog wearing antlers?

The Mean One opens in theaters on December 9th. And you better believe I’ve requested a screener.