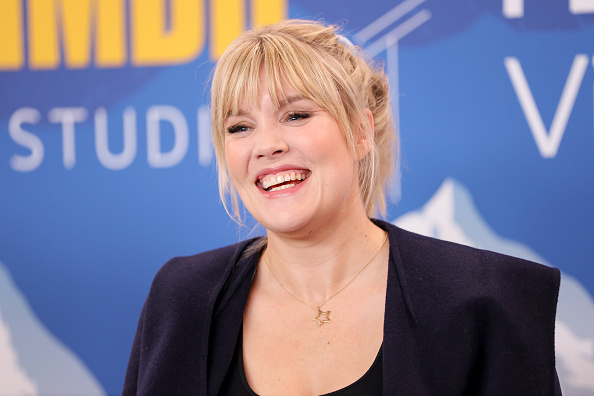 Yesterday, it was announced that Warner Bros. and Bad Robot, J.J. Abrams’ production company that is working with the studio as part of its deal with WarnerMedia, are planning a film adaptation of the DC Comics heroine Zatanna. One of the people who will be helping with that adaptation by penning the screenplay is Emerald Fennell, writer/director of the critically acclaimed, award-winning, and somewhat controversial Promising Young Woman, and also showrunner/executive producer for Season 2 of Killing Eve.

[Emerald] Fennell’s hiring comes as her feature directorial debut “Promising Young Woman” has been the toast of awards season. Along with five Oscar nods, including best picture, screenplay and actress for Carey Mulligan, the movie has garnered attention from the Golden Globes, BAFTA, Directors Guild of America and the Writers Guild.

The upcoming DC Extended Universe installment will be Zatanna’s first franchise appearance. She is known for her involvement with the Justice League, though the character has never appeared in a DC movie. Serinda Swan previously portrayed Zatanna, marking the superhero’s live-action debut, on later seasons of The CW show “Smallville.” The role of Zatanna has not been cast yet.

Following “Wonder Woman” and its sequel “Wonder Woman 1984,” the Zatanna movie would mark only the second female DC hero to headline a DC Films entry. The studio recently cast “The Young and the Restless” star Sasha Calle to play Supergirl ahead of her debut in “The Flash,” but has not set a standalone movie.

For those of you who are reading this post and responded with, “This is so cool. Who the hell is Zatanna, though?,” here are some answers that might help. 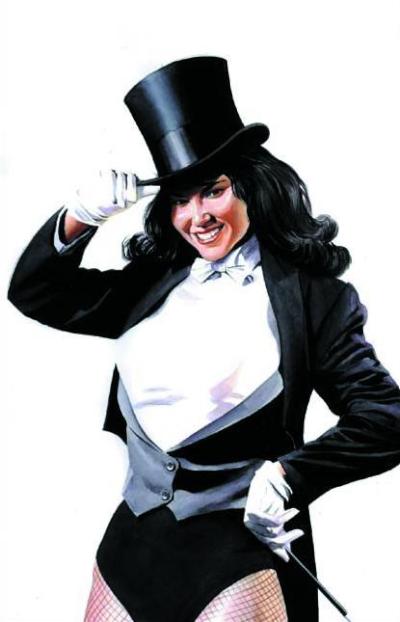 Zatanna (full name: Zatanna Zatara) was created by writer Gardner Fox (who also co-created The Flash, Hawkman, Doctor Fate, the Wesley Dodds version of The Sandman, and the very idea of bringing DC’s heroes together to form the Justice League) and artist Murphy Anderson (also a longtime contributor to DC Comics who illustrated comics featuring Batman, The Atom, Phantom Stranger, and The Spectre), is one of the most powerful magicians in all of the DC Universe, and was born with her skills as a homo magi.

Her powers are mostly activated through incantations that are spoken backward. For example, if Zatanna needs to recover from a gunshot wound, she would say “,em laeH” which is backward for “Heal me.” And if one of her enemies has her gagged or injured vocally to prevent her from speaking any of her incantations out loud, Zatanna could write out her spells backward with her own blood if necessary in order to cast her spell and achieve the same effect. Besides her knowledge of magic, spells, and escape artistry (thanks to her time working as a stage illusionist alongside her father, Giovanni “John” Zatara, who is also a skilled magician), Zatanna is also capable of flight, telepathy, telekinesis, teleportation, astral projection, energy manipulation, elemental control (pyrokinesis, hydrokinesis, cryokinesis, etc.), generating force-fields to protect herself and others from physical harm, and is trained extensively in hand-to-hand combat so she can defend herself in case she is unable to rely on her magic. She has also worked alongside Batman, John Constantine, The Flash, Black Canary, and Vixen, and has been affiliated with the teams Justice League, Justice League Dark, Seven Soldiers, and Sentinels of Magic. 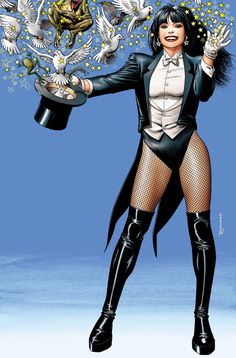 This wouldn’t be the first time that Zatanna has appeared onscreen. She has appeared in several of DC’s animated shows such as Batman: The Animated Series (voiced by Julie Brown, and not the one from Downtown), Batman: The Brave and the Bold (voiced by Jennifer Hale), Justice League Unlimited (also voiced by Hale), Young Justice (voiced by Lacey Chabert), DC Super Hero Girls (voiced by Kari Wuhlgren), on Cartoon Monsoon (voiced by Tara Strong), and in animated movies such as Justice League Dark and Justice League Dark: Apokolips War (both voiced by Camilla Luddington). Zatanna has also appeared on television in live-action form during the final three seasons of Smallville, played by Serinda Swan, and blessed with much better hair than she had when playing Medusa in the ABC television series Inhumans.

The response to this news has been pretty divisive. Some people were genuinely excited about Zatanna getting her own solo film and with an incredibly talented writer like Fennell working on the script to make that happen. Others were slightly less excited about this announcement, as they saw it as yet another example of another talented and promising filmmaker grabbing everyone’s attention with an original film that is a breakout success, only for that director’s next career move to involve the making of yet another big-budget comic-book film for Marvel or DC.

A brilliant filmmaker I’m extremely excited about is going to do major…superhero stuff. Yay? 🙄

So f’ing tired of this limited perspective on what counts as a step up in the career of unique cinematic talents SEND TWEET. https://t.co/cdXYtf30sE

It should be clear that I don’t intend to undermine Zhao or Fennell’s autonomy. They obviously don’t owe us anything. My frustration: this is *all* mainstream Hollywood can see as a next step. Wish these names were given blank checks to make whatever the hell THEY wanted instead.

These weren’t the only tweets to express such a sentiment about directors such as Emerald Fennell and Chloe Zhao getting recruited by Marvel/Disney and Warner Bros./DC to make films for them, and there were others who shot back at that sentiment, by pointing out that they aren’t the first directors to take the “One for me, then one for the studio” approach when it comes to what films they do next and that they won’t be the last. (The biggest and most recent example being Christopher Nolan, who started his career with smaller films like Following, Memento, and Insomnia, and still did The Prestige and Inception in between his work on The Dark Knight trilogy.) There is no shame in directors taking work that will pay incredibly well, while also bringing them greater attention that could work to their advantage and give them more bargaining power when deciding on their next project.

There were also those who couldn’t help but find the timing of this announcement rather suspicious, as this was posted by Variety shortly before their interview with Warner Bros. CEO Ann Sarnoff, an interview that left much of DCEU Twitter feeling pissed-off and disappointed after an entire weekend of feeling satisfied and hopeful. In the interview, Sarnoff seemed to shut down the possibility of Zack Snyder continuing his work in the DCEU after the release of Zack Snyder’s Justice League, as well as the possibility of there being any follow-up films to resolve the cliffhangers shown in that film’s epilogue. She also denied any truth to what Ray Fisher has been saying about Walter Hamada’s interference with the third-party investigation into what happened on the set of Justice League during reshoots that were written and directed by Joss Whedon, that she fully supported Hamada and Warner Bros. Pictures Group chairman Toby Emmerich, and that there was no racism behind Whedon’s decisions when directing and editing the film. The one statement from Sarnoff’s interview that made people raise an eyebrow and go “Are you f—king kidding me?” was this:

Walter [Hamada] was promoted recently. I am fully supportive of Toby [Emmerich] and Walter and their visions. I truly believe they are great executives. Walter happens to be a person of color, so he knows what that feels like. He is bringing in diverse voices at an accelerated pace, more than anyone has in the past.

Which made people in DCEU Twitter, especially Black and brown people in DCEU Twitter, shake their heads in disbelief at Sarnoff using Walter Hamada as a, “But I voted for Obama”/”But I have a friend/spouse who is [insert ethnicity here], so I can’t be racist!” shield against what Fisher has been telling the public about his experience with Warner Bros., while also acting as if Hamada not being white makes it impossible for him to ever exhibit any racist and problematic behavior towards Fisher. There are many people who have viewed recent articles and interviews such as these regarding Warner Bros. and their upcoming DCEU content as nothing but hit pieces against Fisher and distractions to make the public focus attention on anything other than what he’s saying about them on Twitter. Which always seems to be published right after he says something about them on Twitter.

Then of course, there were the f-ckboys on Twitter who saw this announcement about Zatanna getting a solo film and couldn’t help but talk their usual sh-t and make complaints about how it won’t be any good because it’s a DC movie, and how this will be just another woke SJW feminist movie like Birds Of Prey that isn’t accurate to the comics and probably wouldn’t even let Zatanna look sexy enough and wear her trademark fishnet stockings just like how Black Canary didn’t wear her fishnet stockings either.

As always, whenever f-ckboys on the Internet whine and make complaints like this about movies that aren’t centered on white men being awesome and women looking f-ckable enough to their satisfaction, it usually and deservedly elicits the same response from everyone else who aren’t here for their bullsh-t:

On a brighter note regarding this announcement about Zatanna, there is also the matter of which actress people would love to see playing her in the film. Some of the popular casting suggestions that have been made so far (which also include the hope that Warner Bros./DC will continue to add more diversity to their films and possibly hire a woman of color for the role) include Alexandra Daddario, Kaya Scodelario, Anya Chalotra, Ana de Armas, Elodie Yung, Eiza Gonzalez, Sofia Boutella, Tati Gabrielle (with Giancarlo Esposito as her father, John Zatara), and Zendaya.

← Pete Davidson Reportedly Might Have a New Girlfriend, Gets Court Order Against Fake Wife | Thank God For Nicole Byer →