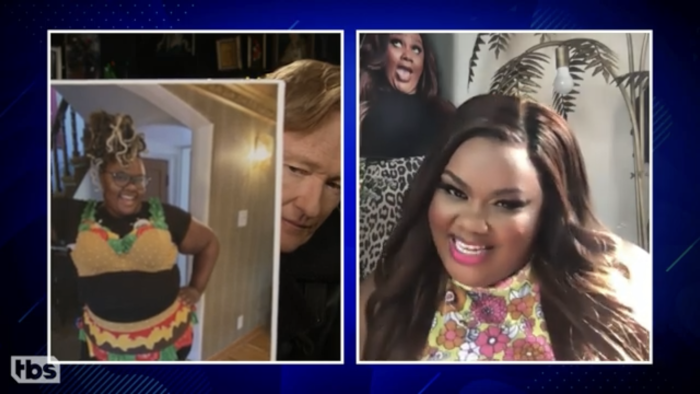 There are some people who just make everything they touch better. That’s what Ted Lasso is about right? I haven’t watched it yet (but I hear great things). Either way, in this instance, I’m not talking about Jason Sudeikis with a mustache, I’m talking about Nicole Byer.

Nicole is a comedy powerhouse. She’s funny, she’s unapologetically herself, and whenever she shows up in ANYTHING, she elevates it. I first became aware of her through several guest spots on the podcast How Did This Get Made? and have not looked back. Now, watching Nailed It, listening to Why Won’t You Date Me (her own podcast), and eagerly awaiting her co-hosting Wipeout are all part of the routine.

As if the proof wasn’t already in the pudding, watching Nicole on Conan settles it. Conan is the type of host who likes getting his own jokes in. In my opinion, it’s part of his appeal. He’s a funny person and there is a compulsion to perform that’s ingrained in him. However, there are certain people with whom he will merely sit back and let them do their thing while he just enjoys it. Nicole Byer is one of those people.

If you don’t already have a steady stream of Nicole Byer in your life, well, fix that. She’s EVERYWHERE (deservedly so). If you don’t want to add a new podcast or show to the ole watchlist, just follow her on Twitter. It’s for your own good! Please listen to my full-on endorsement of one of the funniest people working today!
NICOLE BYER IS WORTH YOUR TIME AND THEN SOME!!

Until then, here she is from her repeat appearance on Conan last night. She’s SO GOOD I was inspired by one of her RERUNS, y’all.

← Zatanna Is Coming To Put A Spell On The DCEU, Plus Zack Snyder's DCEU Future | Twitter Users Feel Their Age When Someone Asks What 'Burning CDs' Means →