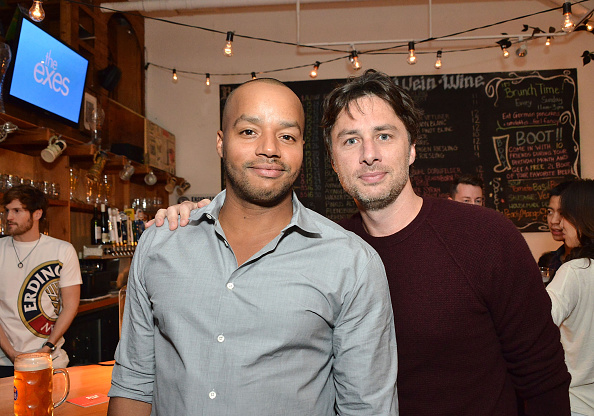 Zach Braff Gets a Bad Rap

I know exactly why Braff has the reputation among some that he does. After six or seven seasons — as Scrubs wore on — as the lead, Braff took heat for a sitcom that might have run long in the tooth; he wrote, starred, and directed in Garden State, a good movie for its time that now represents a certain kind of annoyingly quirky hipster aesthetic long past its expiration date (though, some of us will still admit to loving it); that Punk’d episode that did not depict Braff in a flattering light; and also that time he crowdfunded $3 million to write, direct, and star in the spiritual sequel to Garden State, Wish I Was Here (our critical coverage of that, in fact, seems to be why Braff has blocked us on Twitter).

Those may be reasons to find Zach Braff off-putting, but I still think that Braff gets a bad rap. Scrubs is my all-time favorite sitcom (notwithstanding certain male-centered fantasy subplots that haven’t aged well); Braff has proven himself to be a competent filmmaker (in addition to Garden State, Braff directed the serviceable and profitable Going in Style with Michael Caine, Alan Arkin, and Morgan Freeman); he’s lined up behind good projects, even if they did ultimately fail (Alex, Inc. was a great idea based on Alex Goldblum and the rise of Gimlet Media; it was poorly executed); and hey! Florence Pugh thinks enough of Braff to not only date him but call out others for suggesting she needed their permission to date him.

However, what I have really loved about listening to Braff and Donald Faison’s Scrubs rewatch podcast, Fake Doctors, Real Friends — which has literally been the thing that has gotten some of us out of bed on some mornings — is realizing how similar real-life Braff and Faison are to their Scrubs characters, J.D. and Turk. I mean, they are not doctors, but they are best friends, and everything that we saw between the two in eight seasons of that sitcom comes across twice weekly on their podcast. It is like hanging out with J.D. and Turk for an hour twice a week, and sometimes, when we’re lucky, they bring on the likes of Sarah Chalke, Bill Lawrence, and John C. McGinley, all three of whom are also total delights. While the podcast is mostly about Scrubs, Faison and Braff cannot help but to spend some of the time in each episode catching each other up on their respective pandemics, chatting about their families, and doing the same with their guests, with whom they have the kind of camaraderie that immediately returns no matter how long it has been since they had last spoken.

I cannot tell you how much these podcast episodes have meant to me, personally, but then again, Braff knows how much it has meant to a lot of folks, as he tells THR.

“It’s become the thing twice a week that I genuinely look forward to because, amidst the drama with Nick and the drama of the earth, I know that twice a week I’m going to sit with my best friend and we’re going to crack up and tell old stories. And that would have been fun, period, but the fact that so many people are enjoying it, it’s given Donald and I both a dose of serotonin.”

However, what we didn’t know about Braff and what is not mentioned in the podcast is the “drama with Nick” to which he referred above. “Nick” is Nick Cordero, the Broadway star of Waitress who has been battling Covid-19 and recently had his leg amputated. Cordero and his wife, Amanda Kloots, were living in Braff’s guest house when this all began, and that’s where Kloots and her child with Cordero still remain while Cordero is hospitalized in Cedars Sinai. In that interview with THR, Braff expressed his affection and admiration for Kloots.

She’s amazing. She’s a motivational trainer, so she’s gone into full on bad-ass crisis dealing mode. If you look at her Instagram, she tells stories about him and she motivates other people — she’s literally trying to motivate other people. In addition to being an actor and a musical theater star, Nick is also a songwriter, so she has people singing [his song, “Live Your Life.”] The Waitress company including Sara Bareilles posted a video of them singing it. [Cordero played Earl in the 2016 musical.] I could cry talking about it. He’s a very beloved man, one of the kindest people you’ll ever meet, and he was on Blue Bloods, too, so all of these different communities that he’s touched are coming together. Every day at 3 p.m. she does this thing where she plays his song and people all over the world play it, too. It’s all very, very moving. And my neighborhood has rallied around her as well. There’s just a non-stop stream of people dropping things off. And he was in Rock of Ages, the show that they were doing out here, and his Rock of Ages cast literally takes turns taking the baby on stroller walks.

All that I am saying here is that there is more to Braff than some of us might have given him credit for. It’s clear based on the podcast that J.D. was as much Braff as it was the writing of Bill Lawrence; that he’s more talented than we might want to admit; that notwithstanding the time he yelled at a kid when he thought that bratty kid had destroyed his car, Braff is a likable guy; that he’s more generous than anyone might have believed; and that he and Faison write one hell of a great podcast theme song!


← An Oregon Strip Club Has Gone 'Mad Max' to Save Its Business, and the Aesthetic is a Mood | In Memoriam: Irrfan Khan Was a Gentleman Who Captured Your Heart With His Eyes →