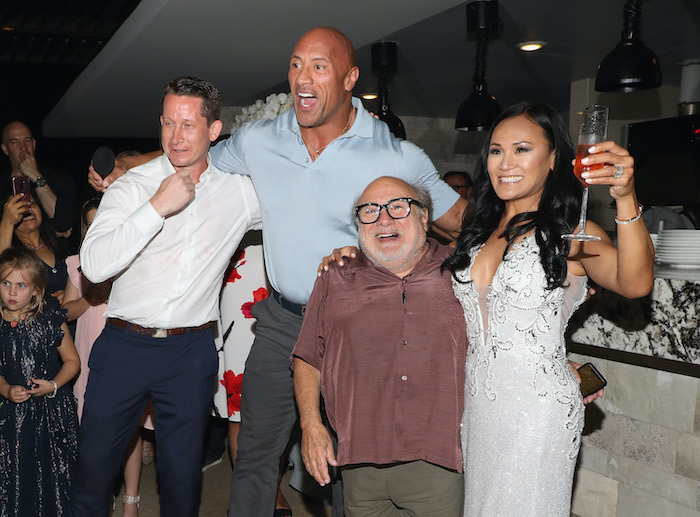 If you’re asking me to list my interests in the world, at the moment, you will not be surprised to find out that a drunk Danny DeVito is #2 (#1 is swimming pools, always.) So, naturally, I was delighted to find out there was another entry into the “Danny DeVito Drunk Again” annals, and this time, The Rock was also there.

First, because it’s mandatory to bring up anytime you’re talking about Danny DeVito getting schwasted, here’s his beautiful, Limoncello-soaked interview on The View, 13 years ago. You’ll recall he got in that state by getting drunk with George Clooney the night before.

Anyway, word on the street is, Clooney’s gone soft so DeVito was in the market for a new boozin’ buddy. Luckily for him, he’s on a press junket for Jumanji 2: Electric Boogaloo with The Rock right now. You know, The Rock, the man who lists Tequila as his third interest in life on his social media profiles.

So what are two bros, drinkin’, to do on a Saturday night? If you say, produce a-not-at-all planned video of them crashing a wedding, well, I see you subscribe to my Kate’s ꓘorner newsletter. Thank you for that.

For everyone else out there who don’t want to know how often I muse to myself (and others) whether I should get bangs again and thus are not subscribers, here’s a sample of what you’ve been missing:

What started off as a quiet sunset Teremana tequila 🥃 toast with mi amigo, Danny DeVito - turned into Wedding Crashers 2.0.
So much love and mana in the room for the lovely bride & groom.
Congrats Will & Kristine Abbot! #unforgettable ❤️#cabosanlucas#rockdevitoweddingcrash pic.twitter.com/Su2UKxqL0K

So…that was planned in advance, obviously. Whether that was an hour or weeks is anyone’s guess. You know what though? I don’t care. It’s adorable and I’m down for this kind of wholesome content. Danny DeVito and The Rock are bro goals we all should aspire to, especially because crashing weddings with open bars is part and parcel of all that and that is like, my third interest in life. ¯\_(ツ)_/¯

The only thing that makes me pause about this whole situation is whether or not The Rock ate the food there without an RSVP. We all know this man can eat—like, a lot a lot. He may have thrown the entire headcount off, because even a snack for him, is like, three plates of food for the rest of us.

Kickin’ off my Sunday cheat meals right with pasta 🍝 bolognese & 2 New York bagels 🥯 and a bunch of unexciting for the ‘gram business work. All four of these elements will be handled firmly and happily within the next hour. Enjoy your cheat meals, my friends. #thegluttonybegins #tcb

Although that said, when you eat like The Rock, you probably travel with your own Yeti cooler full of fully prepared, hot meals, at all times so I’m probably worrying over nothing. No one else looks worried, so I’m going to save this anxiety for the next issue of my Newsletter and bid you all a good evening from here.

← What Happened On the Midseason Finale of 'The Walking Dead'? | Jenna Dewan Didn't Shade Camila Cabello Because She Doesn't Know What Shade is, OK!? →