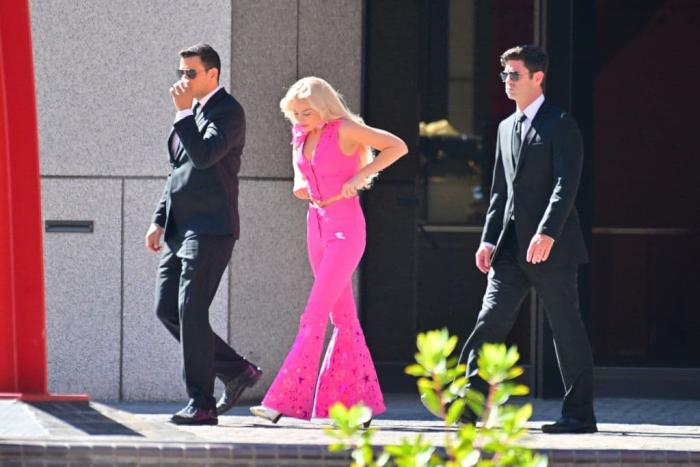 Why Are We Seeing So Many Images From the Production of ‘Barbie’?

Films take a long time to get made. Even Ridley Scott, a scarily prolific director who can churn out a major blockbuster every year, can’t rush things too much. In some instances, the basic shooting process can consume months of a crew’s life. The upcoming Avatar: The Way of Water started filming in 2017 and didn’t conclude until around three years later. So, that gives us a lot of time to speculate, to yearn, and to dig through the internet for behind-the-scenes images. Well, let’s be honest, a lot of the time we don’t need to look that hard for them.

Step forward Barbie. After many years of development and casting rumors, a major live-action movie based on Mattel’s most iconic blonde is currently in production. Margot Robbie is in the title role as well as producing the movie with her husband Tom Ackerley. Oscar-nominee Greta Gerwig is directing and shares a screenwriter credit with her partner, fellow awards darling Noah Baumbach. The cast is ridiculously star-studded, from Ryan Gosling as Ken to Simu Liu, Kate McKinnon, Hari Nef, Issa Rae, and new Doctor, Ncuti Gatwa. It’s rare to see Film Twitter hyped for a film based on a kids’ toy, but the involvement of Gerwig and Baumbach, plus that ensemble of talented hotties, has people amped. That’s a mood that’s only been heightened as we’ve been treated to near-daily glimpses of production. There’s Barbie and Ken as cowboys. There’s Barbie in roller-skates. There’s Will Ferrell also in roller-skates trying to chase her down. It’s rare that I log onto Twitter these days and not see paparazzi pics of Barbie. I’ve seen far more behind-the-scenes pics from this film than any other currently in production. Some have started wondering why they’ve been so plentiful. Is this a Sony PR campaign? I’m not so sure.

THIS IS TAKING ME OUT 😭😭😭 pic.twitter.com/ViParAxGS6

Studios and crews can do little to stop the paparazzi invasion. If you’re making a movie in a public space then the telescopic lenses can and will be utilized. A lot of the time, they don’t even need to stand that far away. And that doesn’t even include the random passers-by with their phones filming and photographing every conceivable moment for instant social media fame. I imagine this must be detrimental to those simply trying to do their jobs, especially if you’re an actor and you’re supposed to be focusing on being anyone other than yourself. Robbie has talked before about having to deal with over-zealous fans, to the point where she now requires security. Imagine being at work in public like this and wondering who’s around the corner waiting for you.

For Sony, I imagine that any publicity is good publicity, and these images have only increased the hype for Barbie. It’s bringing focus onto its key selling point. This is a movie with a distinct aesthetic. Look at that neon! And Ryan Gosling’s everything! It’s practically lab-born to be retweeted into oblivion. People are curious about this film, fascinated to see what the hell an Oscar-nominated director born from the mumblecore scene will do with a dreadfully cynical prospect such as adapting a kids’ toy into a potential cinematic franchise. The more images they see, the more they wonder, ‘what the hell is doing on and why am I so intrigued?’ They’re doing a lot of heavy lifting in turning cynics into eager future customers. The publicity benefits reap themselves, even with concerns of premature overexposure. I’m not sure I buy those concerns, particularly for projects so eagerly centered on evoking those sorts of stylistic vibes. It felt like we saw every outfit Lady Gaga wore in House of Gucci long before the film was completed but it was still a solid commercial success.

I’m sure that the Discourse around this movie will be plentiful and varying levels of insufferable, as all pop culture conversations inevitably become on this here internet of hell and damnation. Look, we live in a world where people criticize Paddington 2, so let’s not pretend that Barbie and her fab hair will be exempt (remember, Barbie will be released in theaters on the same day as Christopher Nolan’s Oppenheimer so prepare accordingly!) Visibility and publicity matter and Sony’s getting buzz for this movie that you just can’t buy. Making pretentious cinema snobs like me care about an IP content wagon based on a doll because of those on-set paparazzi pics? That’s lightning in a bottle, kids. Besides, we’re not literally seeing everything in this production. We still don’t 100% know what the plot is, although we’ve heard whispers of comparisons to the likes of The Truman Show and The Brady Bunch Movie. A major chunk of shooting took place in England at Warner Bros. Studios, Leavesden, and we haven’t heard a peep from that section of production.

margot robbie on the set of ‘barbie’ today pic.twitter.com/R42Xv0NgL4

But this is also the reality of the current age of entertainment. Everything is content. Every vague rumor or blatantly bullsh*t claim can be packaged as a six-paragraph substance-free clickbait article and get far more attention than a well-reported feature on the mundanities of filmmaking. Marvel is so eager to maintain the element of surprise with their franchise that they’ll keep huge details away from their actors while they’re filming (and let’s be honest, sometimes you can really tell that those poor performers have no idea what they’re supposed to be reacting to.) For a mainstream studio picture, especially one with big stars and a recognizable IP front and center, to get to theaters without the majority of details being spoiled is akin to a modern-day miracle. I think spoilers are part of the marketing now. How many trailers have you seen lately that give away way too much of the plot? It seems to be working for Barbie. Were you into this movie before you heard Gosling scream while wearing those knee-pads?


← Cristin Milioti Did Not Stay Unemployed for Long | 5 Shows After Dark: 'The Flash' Season Eight Finale on The CW, 'More Power' Series Premiere on the History Channel →