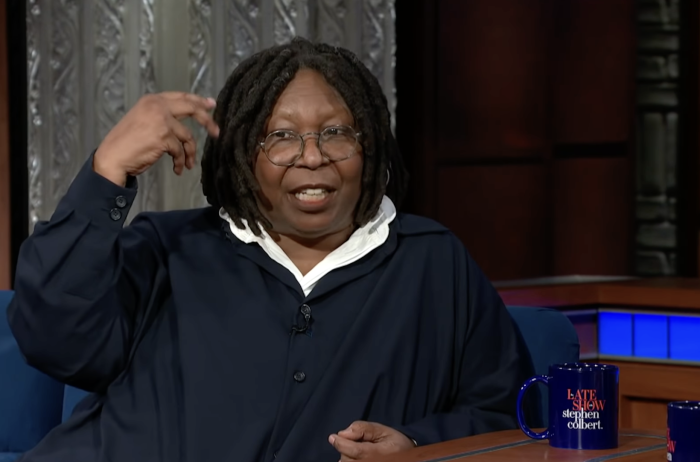 Update: Whoopi Goldberg Says Something Dumb, Apologizes, and Then Doubles Down

Yesterday on The View during a “conversation” on the banning of Maus in a Tennesee school district, Whoopi Goldberg suggested that the Holocaust was not about race, because conservatives and Joe Rogan have not cornered the market on stupidity.

When Ana Navarro tried to correct her and remind her that the Holocaust was about white supremacists going after Jews, Goldberg interrupted her.

“But these are two white groups of people! The minute you turn it into race it goes down this alley. Let’s talk about it for what it is. It’s how people treat each other. It doesn’t matter if you’re Black or white, Jews, it’s each other.”

Needless to say, Goldberg’s comments didn’t sit well with the Jewish community. Everyone from the Anti-Defamation League to the Holocaust Museum, American Jewish Committee, and even the official Auschwitz Memorial Twitter took her to task. By day’s end, Goldberg bowed to pressure and apologized.

OK, phew! Cool. She admitted her error and apologized so we can move on now, right? Right?
Not so much, because she also appeared on The Late Show last night, which was taped before she issued her apology but aired after, and she doubled down.
“I don’t want to fake apologize,” she said. “I am very upset that people misunderstood what I was saying.”
See, it’s our fault for misunderstanding what she was saying. And what was she saying again?
“When you talk about being a racist, you can’t call [the Holocaust] racism. This was evil. This wasn’t based on skin. You couldn’t tell who was Jewish. You had to delve deeply and figure it out …. My point is: they had to do the work. When the Klan is coming down the street and I’m standing with a Jewish friend - I’m going to run. But if my friend decides not to run, they’ll get passed by most times, because you can’t tell most times … that’s what I was trying to explain. I understand not everybody sees it that way and I did a lot of harm to myself and people decided I was all these other things that I’m not. I get it, folks are angry, I accept that, and I did it to myself, and I’ll work hard to not think that way again.”

The biggest problem with celebrity is that the people with the largest platforms are too often the people who are also the most ignorant. And the most stubborn. This is ignorance, plain and simple. It is conflating skin color and racism, when racism — as the dictionary notes — is “prejudice, discrimination, or antagonism directed against a person or people on the basis of their membership in a particular racial or ethnic group, typically one that is a minority or marginalized.”

Appearance is not mentioned in the definition of racism. I get what she is trying to say — a Jewish person walking by a KKK rally might be in less danger than a Black person walking by a KKK rally because a Jewish person might not be as easily identifiable — but racism is not defined by the amount of work necessary to discern a person’s race, and it’s unclear to me why Goldberg would even want to draw that distinction. The Holocaust was evil, but it was also racism. Also, racism is evil.

Goldberg ultimately sort of apologized again, while insisting that she sees it one way while others see it another way. “Don’t write me anymore. I know how you feel. I get it. I’m going to take your word for it, and never bring it up again.”
Ah, yes. The old “I’ll take your word for it.” That is exactly what I might say to my wife when I’m more interested in ending an argument than understanding why I was wrong.

Update: Goldberg apologized again this morning on The View, and this time, she did it right, saying she “misspoke,” and that the Holocaust “is indeed about race, because Hitler and the Nazis considered the Jews to be an inferior race. Now, words matter — and mine are no exception. I regret my comments, and I stand corrected. I also stand with the Jewish people.”

← Did School Libraries Ban the Constitution Because No One Understands the First Amendment Anymore | Review: 'Nightmare Alley' Sees Guillermo del Toro Dive into a World of Relentless Sleaze →