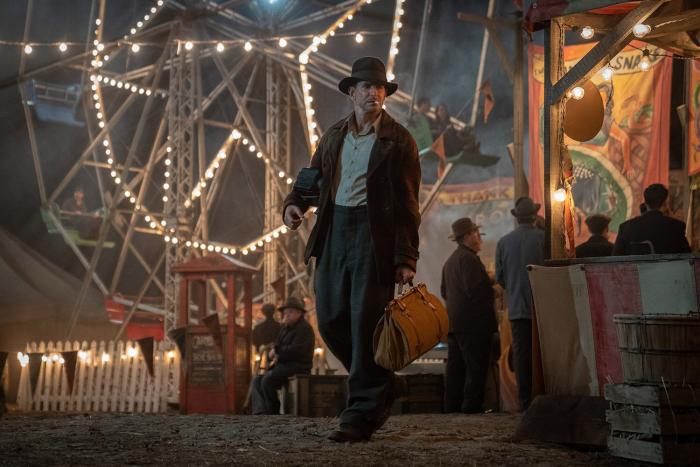 From the first moment we see him, it’s clear that Stanton Carlisle (Bradley Cooper) is a very bad man. The film introduces him dragging a corpse into a hole in a dilapidated house before setting the whole place on fire. Fleeing the memories of whatever was in that pit, Stan ends up tagging along with a traveling carnival, a shaggy dog operation populated by sideshow acts and figures who wear the label of freak, willingly or otherwise. It doesn’t take him long to discover a talent for cold reading, a huckster trick that he decides to spin into a glamorous mind-reading act with evangelical implications. It’s just an act, right?

Based on the novel by William Lindsay Gresham, which was previously adapted for film in 1947, Nightmare Alley, on the surface, seems like a curious fit for Guillermo del Toro. Sure, a circus setting seems right up his alley, but del Toro is one of our current era’s most unabashedly earnest filmmakers. He adds twists and stabs to fairy-tales but ultimately he is devoted to these dark worlds and to the monsters who populate them. You can’t love such creatures unless you’re totally serious about them. It’s what made The Shape of Water work, even though it seemed improbable that audiences would warm to a Cold War romance where the hero was a sexy fish-man. Yet that movie won the Best Picture Oscar. Gresham’s novel pours optimism down the drain like cheap booze plied upon desperate men to coax them into abhorrent acts. It’s a book totally devoid of heroes, of laughs, of hope. How does del Toro take on a story of such unrelenting sleaze?

Pretty well, it turns out. Expanding upon the novel with the help of co-screenwriter Kim Morgan, del Toro opens up a route to empathy for many of the characters. Stanton’s daddy issues are given some room to breathe and Molly is developed beyond the naïve waif she is in the novel. But it still denies them the easy way out that a traditional Hollywood narrative prefers. The final half of this film is basically a glowing red-light warning both Stanton and the audience that nothing good lies ahead. It’s nervy stuff for any filmmaker but especially one who loves to imbue a sense of melancholy amid the hopeless. For Nightmare Alley, there is no sweet, only bitter.

Stanton meets Zeena (Toni Collette), a savvy performer who does minor fake psychic tricks with her loving but boozed-up husband Pete (David Strathairn.) The routine is harmless, a series of signs and codes that focus on more frivolous issues than matters of life and death. Zeena is even kind enough (or guilt-ridden) to let gullible customers know what’s happening when the routine goes too far. People just want to be seen, they lament to Stanton. He hears this and sees dollar signs flashing and soon recruits the sweet Molly (Rooney Mara) to take his act to the next level, meaning to people with more money than dustbowl locals. Cooper, an actor who is at his most interesting when he unleashes his inner bastard, is on magnetic form as a lost man who soon begins getting high on his own lies. The sheen of confidence and power his act creates dazzles everyone, himself included. There are moments when he seems close to deranged by his own act, all while clinging to the dwindling shreds of his self-awareness. If he knows it’s a trick then that’s all it will ever be, surely?

Stanton has total disdain for practically everyone he meets. He looks at Pete, the man teaching him his wares, with barely concealed pity. When he moves onto bigger and riskier targets, he has no qualms about selling himself as a figure of immense supernatural powers. During one show, a very striking psychologist named Dr. Lilith Ritter (Cate Blanchett in full 1940s Barbara Stanwyck femme fatale mode) almost calls him out on his tricks, so he humiliates her in front of a cheering crowd. If you’re enough of a dolt to be taken in by his genius then that’s not his problem, so he thinks. Everyone around him knows that this mindset can only lead to trouble, which doesn’t make his journey any less of a jolt to witness.

As with all del Toro films, the craft here is impeccable. Production designer Tamara Deverell brings to life the grime-covered circus, all peeling paint and sun-bleached signs of extravagant promises. It’s a stark contrast from the art deco elite of Buffalo, New York, where Stanton and Molly move their act. There are long, labyrinthine corridors to get lost in, and mirrors everywhere. Don’t let the shine of this world fool you, it is as merciless as the carnival, only with less likable figures populating it. The side characters aren’t always as callous as they are in the novel. Zeena is shown as self-aware and carefully controlling of her act, at least in the beginning. But aside from Molly, the closest the film comes to having a beating heart at its center, this is a place where humanity’s default mode is ‘every man for himself and screw the others.’

What made Gresham’s novel so shocking, aside from its smothering sleaze, was the ceaseless pessimism it had towards others. The reason Stanton’s act works so well is that, as much as we pride ourselves on our uniqueness, we’re all bound together by the most common of denominators. There’s always a bad memory, a family member we loved yet hated, that pulsing desire to be emotionally naked in front of someone who looks as though they care. To Stanton, these people are open books for him to read, to laugh at, to fleece. And there will always be others like Stanton Carlisle, as del Toro emphasizes. Maybe that’s why audiences haven’t flocked to see Nightmare Alley (although I imagine the lack of major promotion from Disney/Searchlight, the Spidey competition, and the whole plague thing were bigger determining factors.) It’s not easy, even in a film this gorgeous to behold, to be told that most people are beyond saving. Del Toro may love his monsters but the beastly men of Nightmare Alley get what they deserve.

Nightmare Alley is currently playing in theaters nationwide. A special black-and-white edition is showing in select locations in Los Angeles.