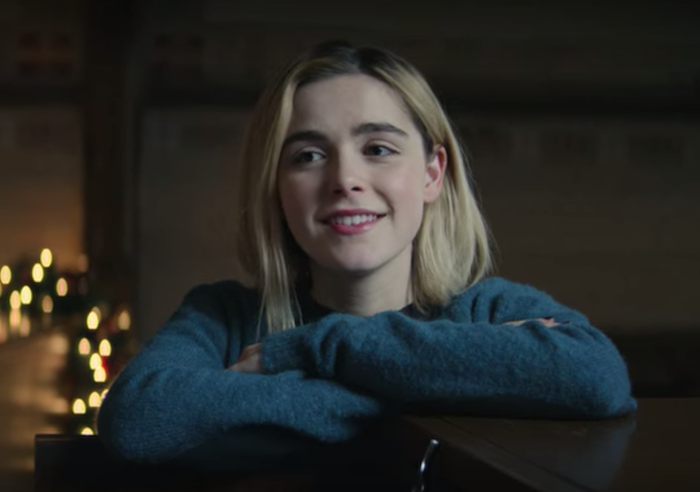 Where You've Seen the Cast of Netflix's 'Let it Snow'

Hey, we’re all presumably adults here (if not, well, you have more of an excuse to click on this post than the adults, so good on ya!). I bring that up because there’s no shame that I, an adult woman, spent last Friday evening watching as many Christmas movies on Netflix I could find. I most definitely watched Let it Snow, which is basically a low-rent Love, Actually starring teens and Joan Cusack dressed in tinfoil. Not a typo—as much as I wish it were.

Anyway, like an old, I kept thinking to myself of the youths in the cast, “Hey, I’ve seen you somewhere, before.” So, in the name of helping, but really, so that I personally remember where I’ve seen these people, I’ve put together a handy dandy list of “Hey, where do I know you from?” for the cast of this movie. Now you can impress the surly tween or teen in your life while you try to show them you’re still jiggy wit’ it. Enjoy!

Kiernan Shipka - “Angie” the one who basically exists to be the perfect love interest for the teenage boy without a real personality other than his music tastes.

Where you know her from. Mad Men (duh, she’s Sally Draper!) and Sabrina the Teenage Witch.

Isabela Merced - “Julie” the girl who has the storyline with the pop star but who also is struggling with whether to go to college.

Where you know her from—she’s Dora in the recent Dora the Explorer movie.

Shameik Moore - “Stuart” the guy who is the pop star who maybe wants to not be a pop star anymore.

Where you’ve seen him before: The Wu-Tang series on Hulu, The Get Down on Netflix….but you’re probably more familiar with his voice. He was Miles Morales in Into the Spiderverse.

Odeya Rush — “Addie” the girl who ignores her best friend and just talks on and on about the dude she’s seeing but who’s not into her.

Where you’ve seen her: She was in Ladybird (a movie I’ve never seen, so…) but I recognized her as the sidekick in Dumplin’ a movie I did see and really love.

Matthew Noszka — “JP” who was the hot, woke dude.

Fire up your @netflix accounts people! #letitsnow drops tmr! 🎁❄️ Who else is as excited as I am?

Jacob Batalon — “Keon” he’s the guy who wants to be a DJ and inexplicably has a party at a knock-off Waffle House on Christmas Eve because none of these teens have parents who give a s*it where they are, apparently.

Here’s a little photo album of your faves killin the game at the Waffle Town🔥❄️😝 Let It Snow is out worldwide now, only on @netflix

Where you’ve seen him: MCU, he plays Ned in the Spiderman movies and was also in End Game.

Liv Hewson — “Dorrie” the teen who works at the Waffle House knock-off and has a crush on the cheerleader. Her best friend is Addie, who ignores her a lot.

🎶 won’t you take me to 🎶 waffle TOWN 🎶 @netflix #LetItSnow

Where you’ve seen them —they are the daughter on the Santa Clarita Diet.

Mitchell Hope — “Tobin” the guy whose entire personality is pining away for Angie.

Where you’ve seen him—he’s in Disney’s wildly popular Descendants series, so maybe there?

Miles Robbins — “Billy” the guy who works in the Waffe House knock-off. I think he’s the teen-manager or something.

Where you’ve seen him—he was the man-bun dude with all the drugs in Blockers. Also IMDB tells me had had an arc on The X-files reboot as Jackson Van De Kamp.

Joan Cusack — “Tin Foil Woman” the woman who, you know, was dressed in tin foil.

Where you’ve seen her— Nope. Not gonna do it. It will be a cold day in hell when I explain the magic of Joan Cusack, and her extensive body of work to anyone. Sorry. No.

Well, hopefully this helped you place the cast of Let it Snow. It may or may not help with your enjoyment of the movie, but you know what? It was cute for what it was. That’s my story and I’m sticking to it.